Researchers who looked at decades-old X-rays of a 390-million-year-old trilobite fossil found that it had an entirely unique eye structure made up of 200 large lenses in each eye.

Phacops geesops, a trilobite of the suborder Phacopina, lived during the Devonian Period, about 390 million years ago.

At least six facets are arranged under each optical lens in each of the eyes of the extinct arthropod, each of which together form a small compound eye,” zoologist Brigitte Schoenemann of the Institute for Didactics of Biology at the University of Cologne said in a statement.

Although the discovery was originally made by amateur paleontologist Wilhelm Stürmer in the 1970s, it wasn’t until Schoenemann and her team recently went back and reevaluated the X-rays — and confirmed them with CT scans — that Stürmer’s findings were officially confirmed. 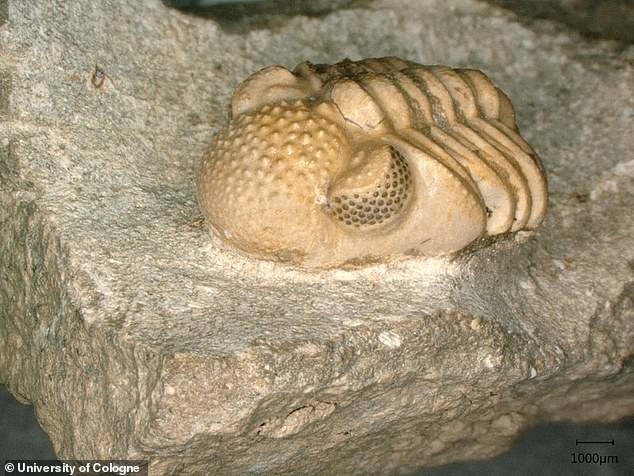 The eyes of Phacops geesops, a Devonian trilobite, have 200 lenses each, spanning six small facets. Each facet forms a different individual eye

Stürmer, a radiologist at the German technology company Siemens, was an avid paleontologist who spent decades driving his VW bus equipped with an X-ray station to quarries in Hunsrück, in central Germany, to look for fossils.

When he saw the X-rays of p. geesops, he was sure they showed fossilized optic nerves with masses of lenses.

At the time, however, Stürmer’s findings were rejected by experts.

“The consensus was that only bones and teeth, the hard parts of living things, were seen in the fossils, but not the soft parts, such as guts or nerves,” Schoenemann said. 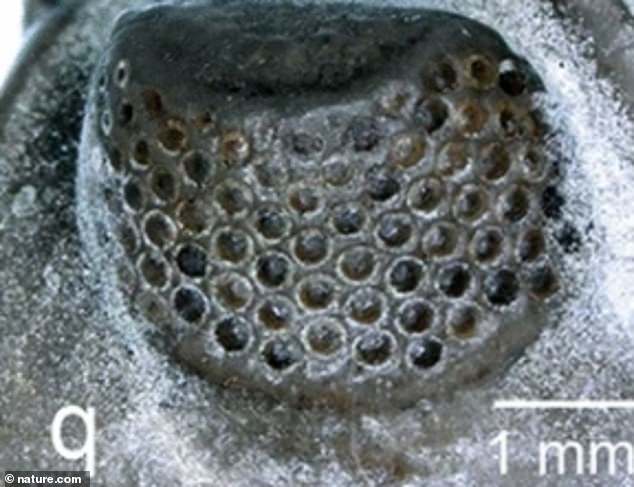 X-rays from the 1970s first suggested p. geesops had this unique optical network, but experts rejected the idea at the time. Pictured: Phacopid schizochroal eyes show greater distance between lenses than most compound eyes

In the new study, published in Scientific Reports, Schoenemann and an international team of researchers verified Stürmer’s non-expert analysis.

They determined that trilobites of the suborder Phacopina had an optical network unique in the animal kingdom.

Each of their two eyes had 200 lenses, each up to a millimeter in size.

Their subfacets are arranged in one ring or two rings, including a “foamy nest,” Schoenemann said, which was likely a local neural network used to directly process information from the hyper-eye. 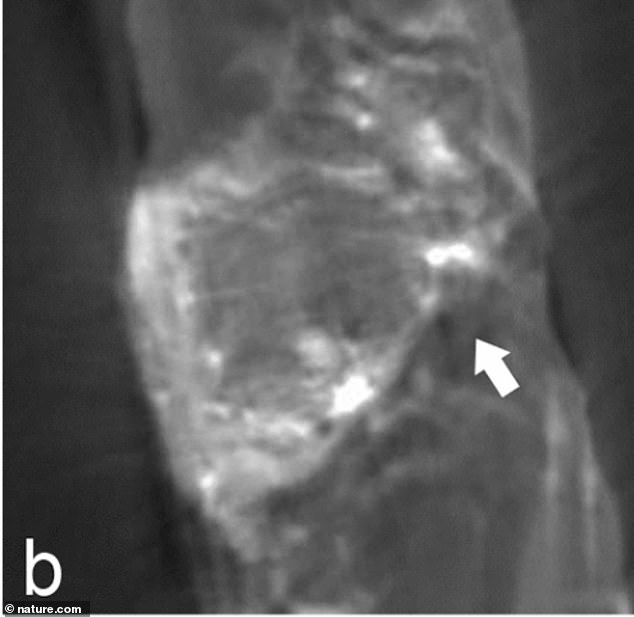 They also found an optic nerve that would have conducted information from the trilobite’s eye to the brain, just as Stürmer theorized.

Schoenemann had even found markings on Stürmer’s X-rays, which labeled the six subfacets.

“On an X-ray negative, there was an arrow in a red pen pointing to the structure of the six lower facets under a main lens,” she said.

“This probably indicated that Stürmer had already recognized the hypercompound eye.”

The team confirmed Stürmer’s findings with modern CT technology that was unavailable 40 years ago. 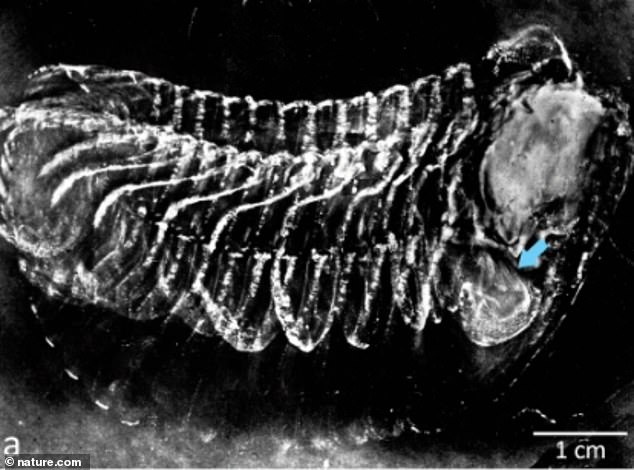 Most trilobites had compound eyes similar to those found in insects today — a large number of hexagonal facets that make up an eye, with eight photoreceptors under each facet.

To get a coherent picture, these facets must be very close to each other.

However, in the trilobite suborder Phacopinae, the outwardly visible lenses of the compound eyes are much larger and much further apart.

That didn’t make sense until Schoenemann looked at Stürmer’s 50-year-old X-rays and realized she was looking at a hyper-compound eye.

The “supereye” could have been an evolutionary adaptation for seeing in low light, she said. 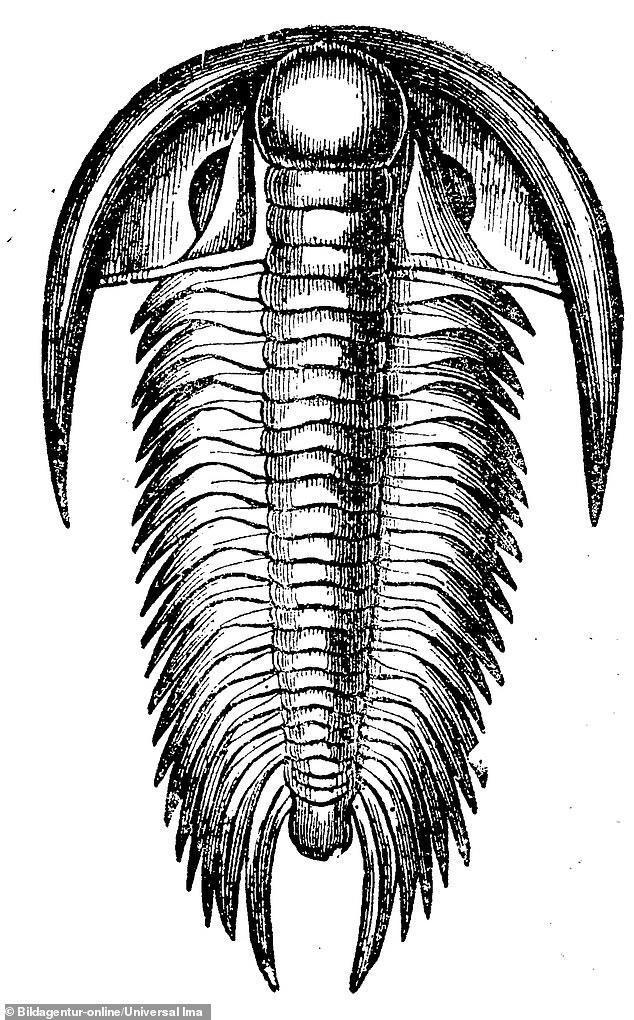 It is possible p. Geesops’ hypereye is designed to show it in low light, researchers said. Pictured: A view of a trilobite created in the 1880s

With its highly complex visual apparatus, it may have been much more sensitive to light than a normal trilobite.

“It’s also possible that the individual parts of the eye performed different functions, allowing, for example, contrast enhancement or the perception of different colors,” Schoeneman said.

When Stürmer died in the mid-1980s, his heir gave the university his archive, but researchers have only recently examined it in depth.

In 2017, paleontologists in Estonia discovered an “exceptional” 530-million-year-old trilobite fossil that may contain the oldest eye ever discovered.

The fossil’s right eye was partially worn away, giving researchers a clear view inside the organ, including details of its structures and functions.

Its eye is made up of about 100 optical units, or ommatidia, that are relatively far apart compared to the eyes of contemporary compounds, the team said in a study published in the journal Proceedings of the National Academy of Sciences.

This is probably because the species was missing parts of the shell necessary for lens formation.

“This exceptional fossil shows us how early animals saw the world around them hundreds of millions of years ago,” geologist Euan Clarkson, co-author of the report, said. said at the time.

Mother was told by doctor that her cancer-stricken son, eight, was ‘safer’ at home, inquiry hears

‘World’s most environmentally friendly’ rocket is being built in…

Joe Manchin ‘raised his FIST to Bernie Sanders’ in…

Mosaic floors from the 1,500-year-old lost ‘Church of the…