City grandee Sir Nigel Rudd may notch up more than £8million for his shares as a result of selling top British companies he chairs if the takeover of aerospace and defence group Meggitt goes through.

In recent years, the 74-year-old, nicknamed ‘The Man Who Sold Britain’, has overseen the sales of a string of companies he chaired. 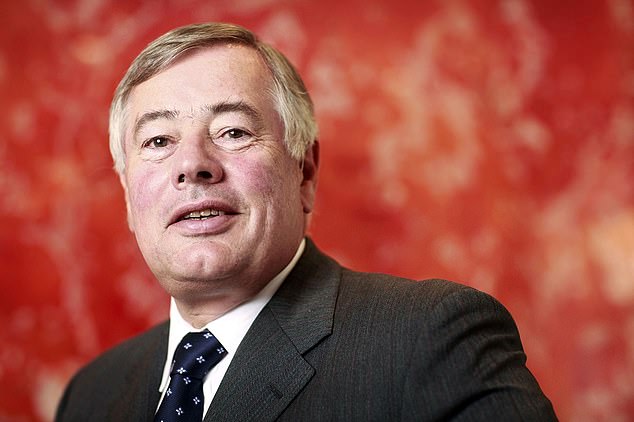 Sir Sell-off: City grandee Sir Nigel Rudd has overseen the sales of a string of companies he chaired, including include Pilkington Glass, Alliance Boots, Invensys, and Signature Aviation

Rudd is an adviser to private equity firm Clayton, Dubilier & Rice, whose takeover of supermarket Morrisons has been approved by the chain’s board, although he has not been involved in that deal.

He chairs Coventry-based defence aerospace firm Meggitt, which made parts for Spitfire fighter planes and is involved in a takeover tussle between US firms Parker-Hannifin and Transdigm.

Parker-Hannifin’s £8 per share offer was accepted by Meggitt’s board, but Transdigm – described as an ‘aggressive, private equity-style outfit’ – has made an unsolicited proposal of £9 per share. It has until September 14 to make a firm offer.

Rudd holds 250,000 shares in Meggitt, having upped his stake by 100,000 in 2019-20. That puts him in line for a windfall of £2million or £2.25million depending on which company buys the firm, assuming Meggitt does not remain independent.

He has already earned more than £2.1million in chairman’s fees from his six years at the company.

The payout at Meggitt would follow almost £600,000 Rudd received for his shares after the sale of Signature Aviation to Bill Gates’s investment firm and private equity giant Blackstone for £3.4billion.

Earlier deals were also lucrative for Rudd, who grew up in Derby and skipped university, instead qualifying as Britain’s youngest chartered accountant aged just 20.

His biggest windfall is likely to have come from the £2billion sale of glassmaker Pilkington to Japan’s Nippon Sheet Glass when he is thought to have been paid £4.3million for his shares. His holding rose by 10 per cent in the year before the takeover, when shares were issued in lieu of pay.

The £11.1billion sale of Alliance Boots to Italian tycoon Stefano Pessina and private equity firm KKR in 2007 netted Sir Nigel £558,429 for the value of his shares. The business is now part of Walgreens Boots Alliance and is quoted in the US.

The smallest amount Rudd is believed to have received is £86,580, following the £4.3billion sale of engineering firm Invensys to French firm Schneider Electric in 2013. The rail division was sold to German firm Siemens for £1.7billion the previous year. 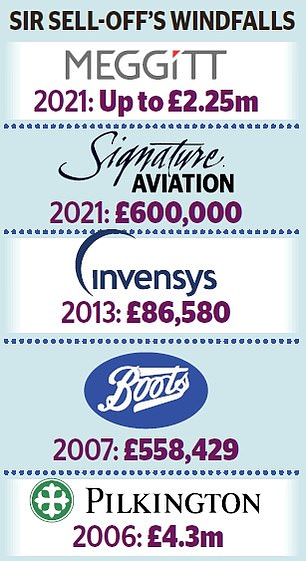 City expert Justin Urquhart Stewart said: ‘He takes up roles at businesses where he can pick up significant shareholdings which will give him a windfall.

‘His track record has been gaining the chairmanship of businesses where there’s likely to be a corporate action – usually a sale – which means he’ll be a swift beneficiary.

‘Quite often you’ll see he is the lightning rod for a corporate transaction to be carried out.’

But Urquhart Stewart said he has ‘concern’ about the sales Sir Nigel has been involved in.

Rudd, whose net worth has been estimated at £50million, is married to Lesley, 75. The couple has three children and seven grandchildren. Trappings of his wealth have included a £7million home in Belgravia, sold after the couple were the victims of a violent robbery in 2012. They also sold a home on the edge of the Derbyshire Peak District for £2.8million in 2017.

Current assets include homes in Chelsea, the Algarve in Portugal and Paarl near Cape Town, South Africa.

During the course of his career, Rudd is estimated to have earned tens of millions of pounds. But, in a Sunday Times interview earlier this month, he was coy on the exact amount, saying: ‘That’s vulgar, even for a working-class boy like me.’

Rudd was chairman of Heathrow Airport between 2007 and 2015, and was also a non-executive director at Barclays Bank, where he served with for 13 years.

On the subject of Meggitt, he said that while ‘clearly, price is important’, its new owner would need to ‘give undertakings’ to keep the company’s headquarters in Coventry and maintain research and development spending.

Meggitt makes parts for civil aeroplane manufacturers Airbus and Boeing, and sensitive parts for F-35 and Typhoon fighter jets. Rudd justified the previous sales, arguing Pilkington ‘would have gone bust’ if the Japanese hadn’t bought it.

Boots was ‘stagnating’, he said, while Invensys was struggling under the weight of £5bn pension liabilities.

He added that Signature, which makes 90 per cent of its sales in America, was ‘materially undervalued’ in the UK.

Rudd told The Sunday Times: ‘When I’m selling a business, I take my fiduciary duty very seriously.’ He said nicknames such as ‘Sir Sell-Off’ and ‘The Man Who Sold Britain’ don’t worry him ‘because my shareholders, the people I work for, are very, very pleased with me’.

He added: ‘I’ve never left a company as chairman with a share price that’s lower than when I started.’

Rudd declined to comment further but a source said that except in the case of Pilkington, he had spent his own money on buying the shares at full price and had not received them as a perk or incentive.