By Kevin Kayhart For Dailymail.com

Jenna Compono and fiancé Zach Nichols have a new – and exciting – challenge ahead of them as new parents.

The Challenge alums announced the arrival of their baby boy when Nichols shared a close-up photo on his Instagram story on Friday, September 2, showing him holding his newborn’s tiny forearm and hand.

The reality competition stars, who were engaged in 2019 but postponed their wedding due to the ongoing COVID-19 pandemic, both warned their social media fans and followers about his imminent arrival in posts on Instagram and Twitter. 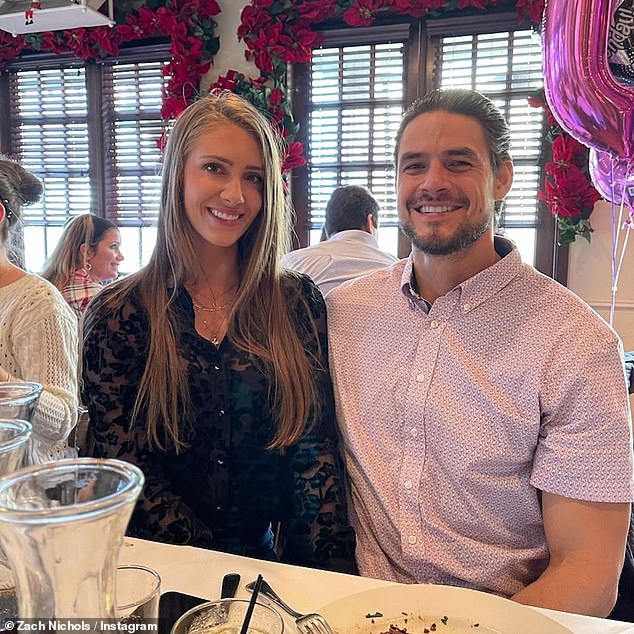 Neither of the two shared details about the birth, including their son’s name or exact birthday, but they had previously revealed that Compono was past her due date.

On Thursday, the new dad confirmed that they would soon be going to the hospital to become a family of three. ‘Last day for us alone!’ he captioned a photo of the couple attending a wedding when Compono was 38 weeks pregnant.”

“Jenna will be induced tomorrow!”

The then excited expectant mom shared on Instagram that “it’s been a crazy journey and 41 long weeks,” and that “tomorrow [Friday] is the day.’

She also took to Twitter and posted: ‘Tomorrow a baby… wild’. 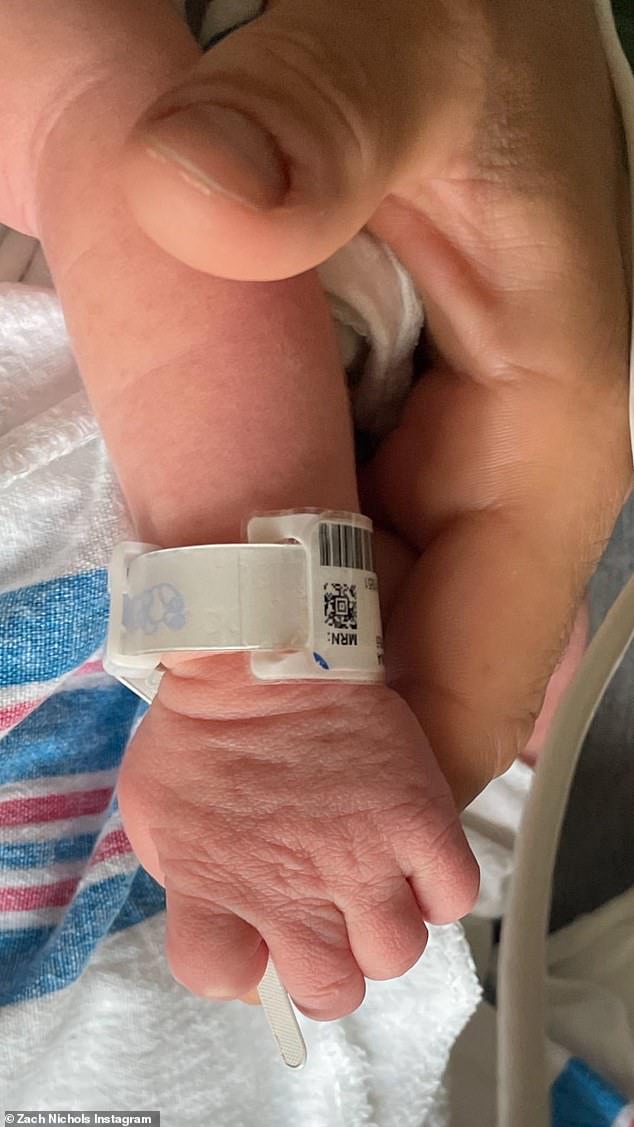 Welcome to the world: The couple announced their son’s arrival when Nichols shared a photo to his Instagram story on Friday, September 2, showing him holding his newborn’s tiny forearm and hand.

The couple announced they were expecting their first child on Valentine’s Day, February 14, a day after their postponed wedding was supposed to take place.

Announcing the baby news, Compono wrote on Instagram: “Happy Valentine’s Day! Zach and I are expecting our first child. After our wedding was postponed, we decided to start the next chapter of our lives. It really wasn’t a difficult decision for us, we were both super excited and ready.’ 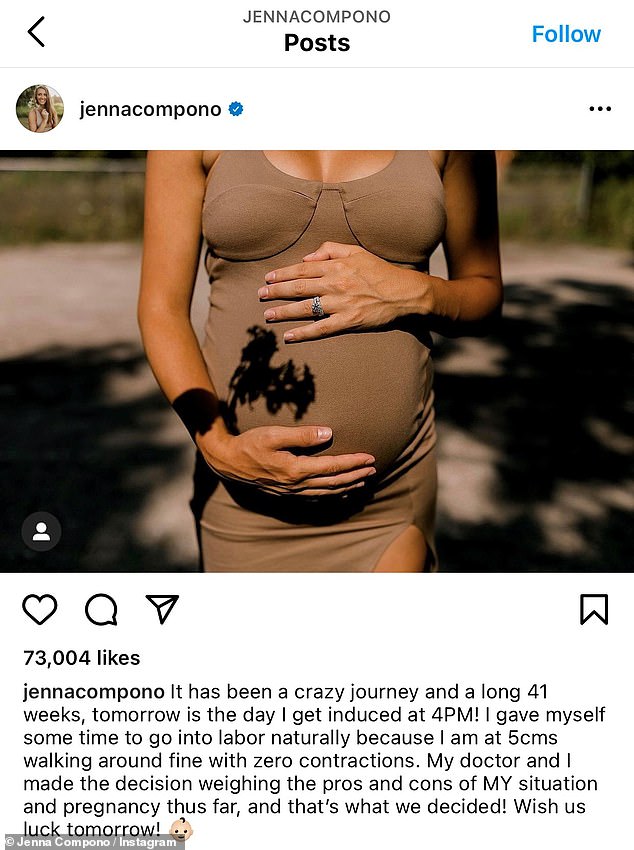 Bundle of Joy: New Mum Said The Last 41 Weeks Had Been A ‘Crazy Journey’ 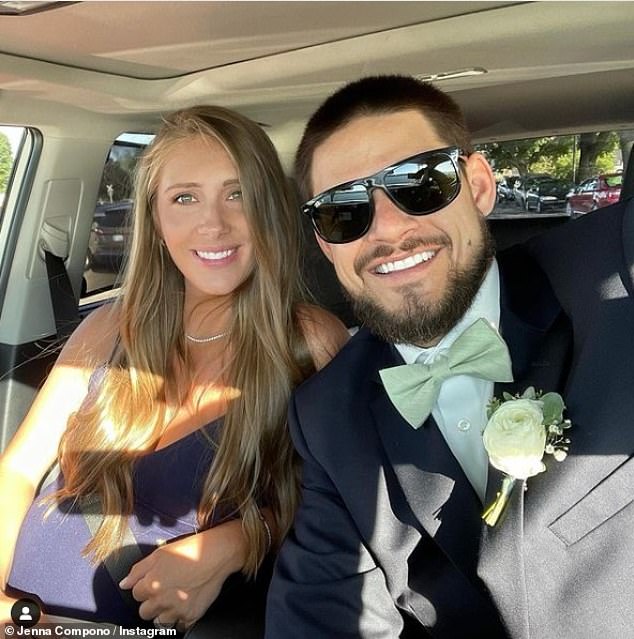 Awaiting the birth: Nichols took to Instagram on Thursday and shared: ‘Last day of just us! Jenna will be induced tomorrow!’; the couple pictured at the last wedding they attended with Compono was 38 weeks pregnant

She also shared how they ‘can’t wait to meet our little one in August’.

They would go on to say that they were expecting a son in March.

The couple, who are also alums of The Real World, met while filming MTV’s Battle of the Exes II in 2014.

They would eventually get engaged when Nichols asked the question when they visited the famous Rockefeller Center Christmas tree in New York City in December 2019.

‘I was so surprised! We went to the tree every year since we met and many memories have happened in New York City. I was so surprised and it was so genuine and sweet. I couldn’t be happier,” Compono told e! News at the time. 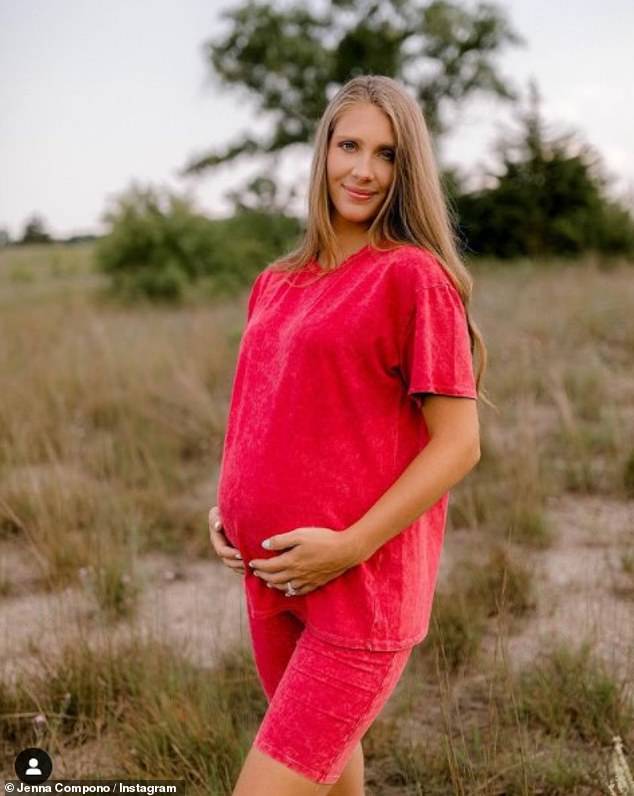 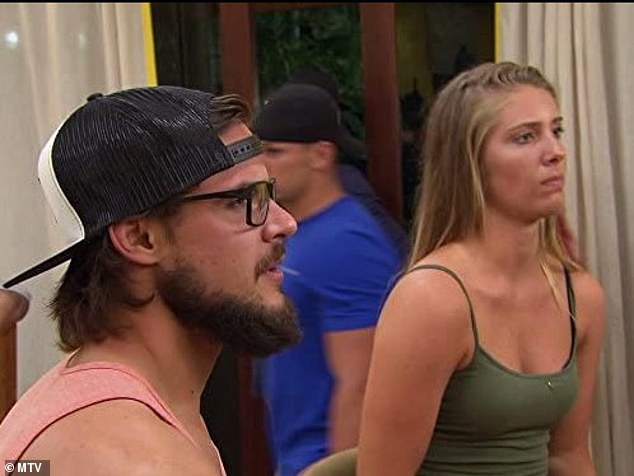 The reality of reality stars: The couple, who are also The Real World alums, met while filming MTV’s Battle of the Exes II in 2014; they dated on and off for several years