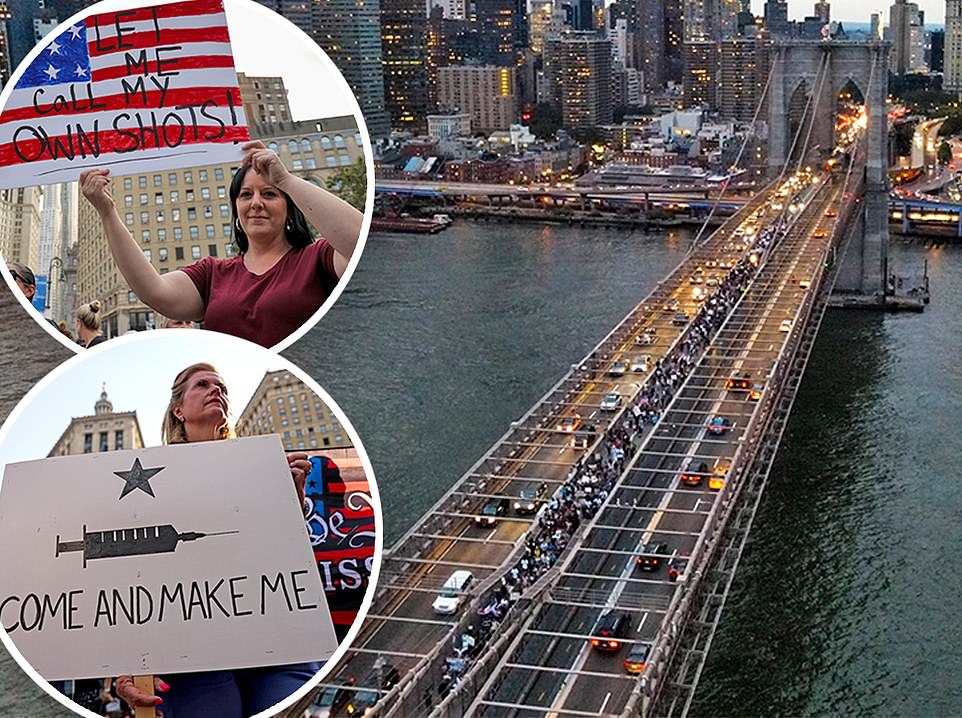 Thousands of people marched across the Brooklyn Bridge chanting against Joe Biden and then gathered near City Hall to protest vaccine mandates on Monday as Mayor Bill de Blasio’s controversial new policy requiring venues to demand proof of the shot went into effect. Video posted to Twitter showed the protesters marching in a demonstration organized by a teachers group that is opposed to New York City ’s requirement that they be vaccinated against COVID-19. The city has also mandated that teachers and staff in public schools are required to get at least one dose of the COVID-19 vaccine by September 27. 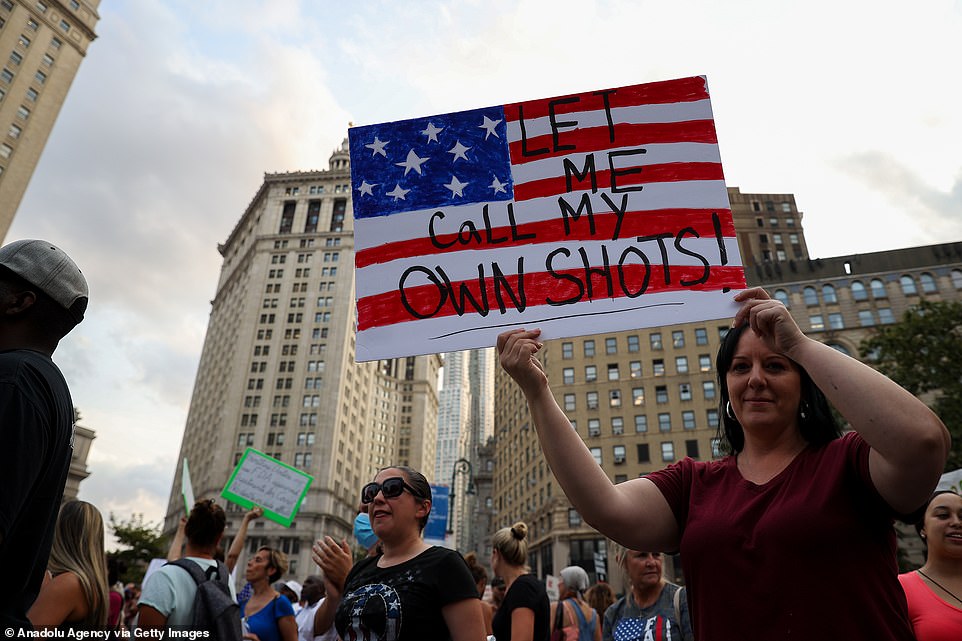 A protester holds up a sign on Monday that reads ‘Let me call my own shots!’ in New York City. The demonstration was a protest against the city’s policy requiring public school teachers to get vaccinated by September 27. There is no test-out option, nor are there exemptions for religious or medical reasons. 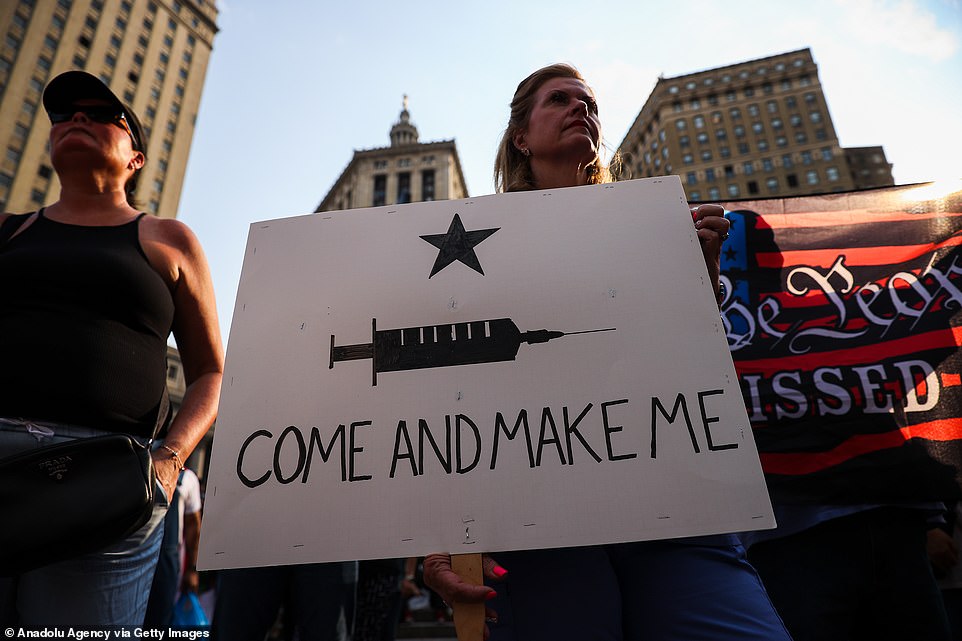 A protester in New York City on Monday holds a sign that reads ‘Come and make me’. 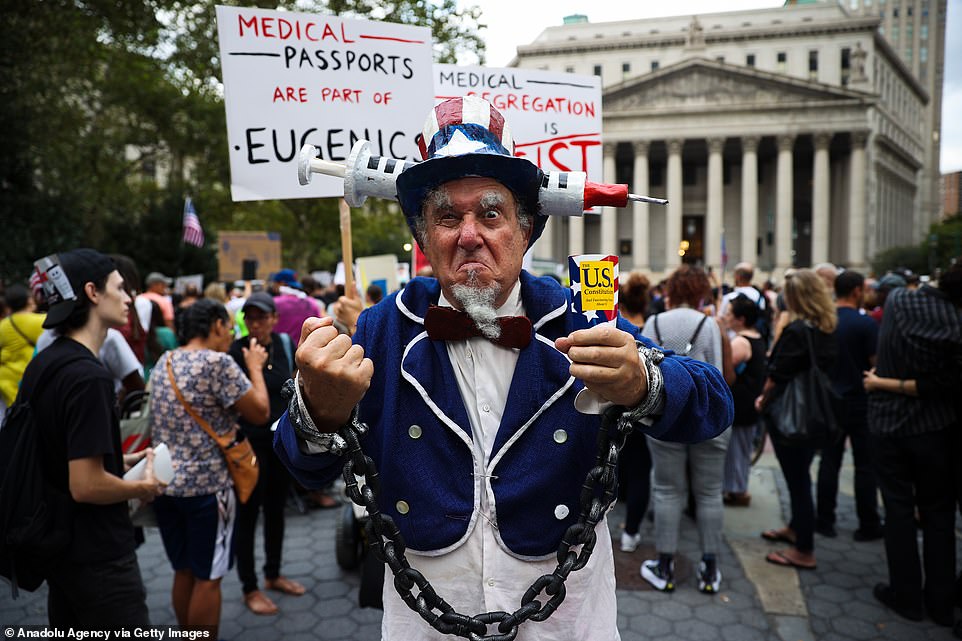 A protester dressed up as a shackled Uncle Sam with an injection needle depicted as going through his head. 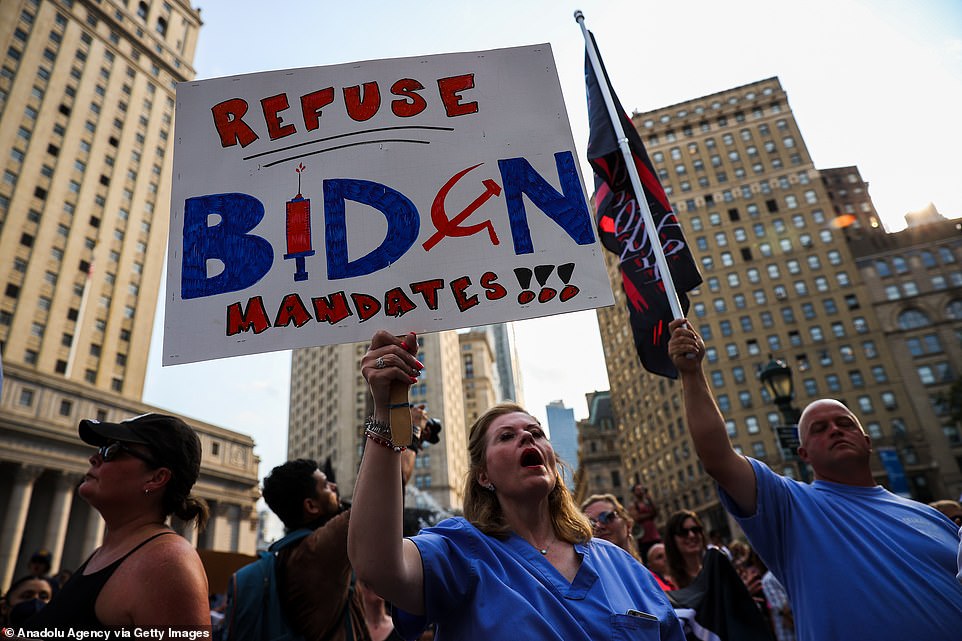 Protesters hold up signs denouncing President Joe Biden’s vaccination policies in New York City on Monday. Those teachers who refuse to get vaccinated would be laid off. The United Federation of Teachers (UFT), which represents the city’s educators, has said it is seeking arbitration to fight the order. 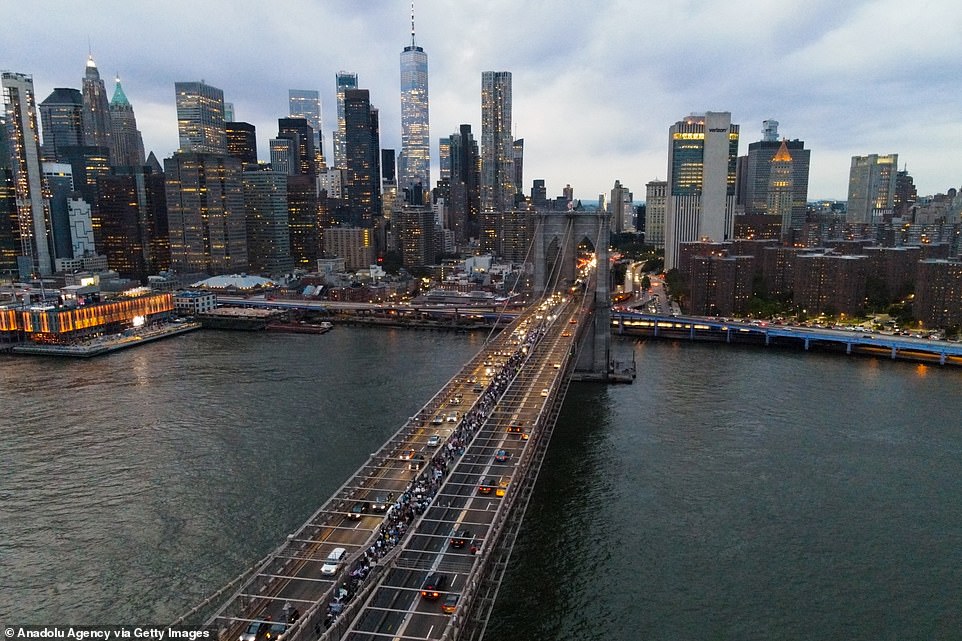 The arbitrator ruled late on Friday that the city must offer non-classroom assignments to teachers who aren’t vaccinated because of medical and religious exemptions. Pictured: Protesters marching across the Brooklyn Bridge before gathering for a rally at Foley Square near City Hall in Manhattan on Monday. 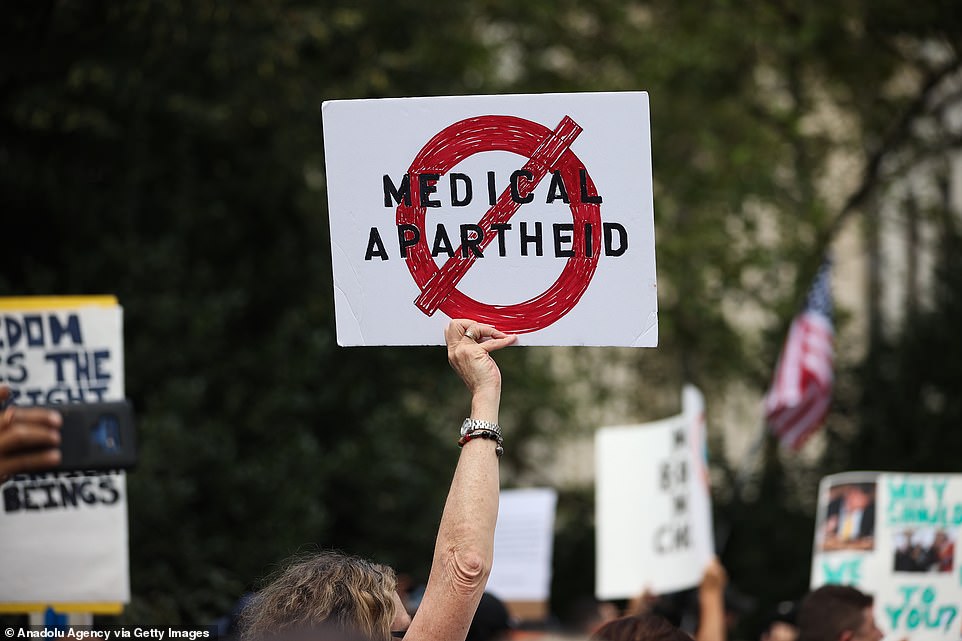 A protester holds up a sign denouncing ‘medical apartheid’ during a demonstration in New York City on Monday. 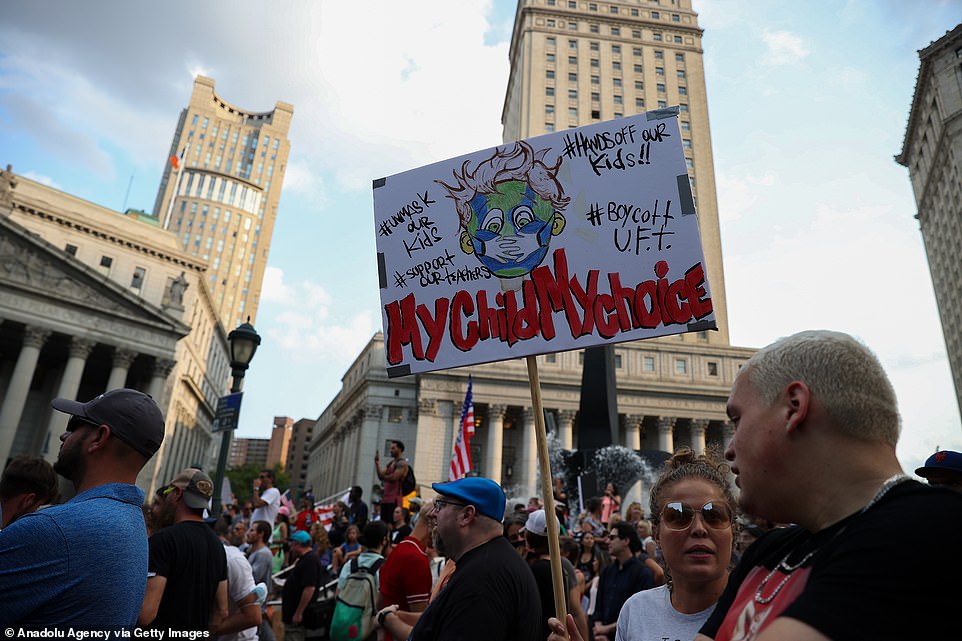 A protester holds up a sign that reads ‘My child my choice’ during a demonstration in New York City on Monday. 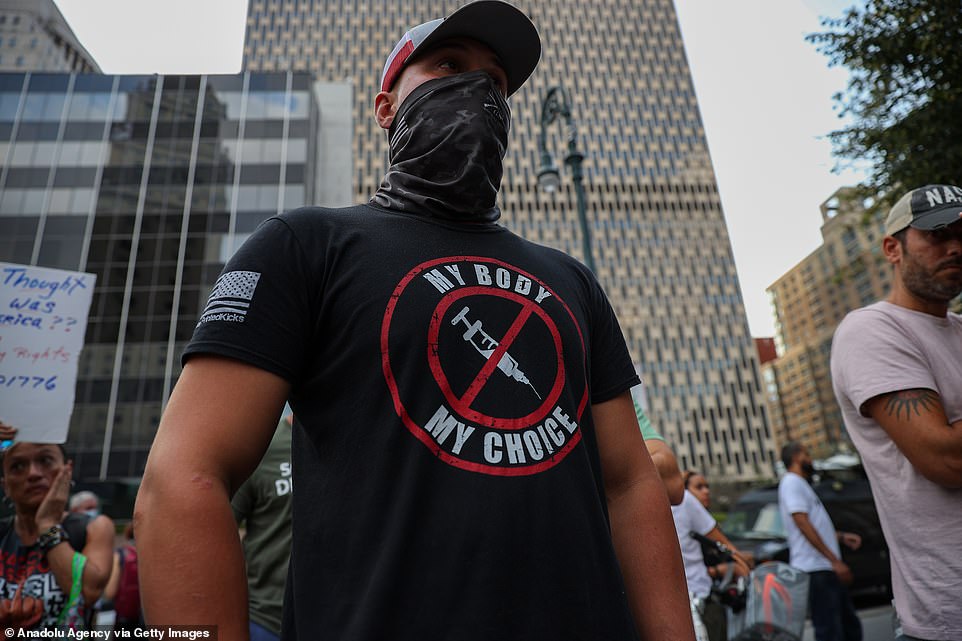 Under the school system’s coronavirus protocols, if there is a positive case in an elementary school classroom, students in the class will receive remote instruction while quarantining for 10 days. In middle schools and high schools, only unvaccinated students will quarantine. Pictured: Another protester dons a shirt that reads ‘My body my choice’. 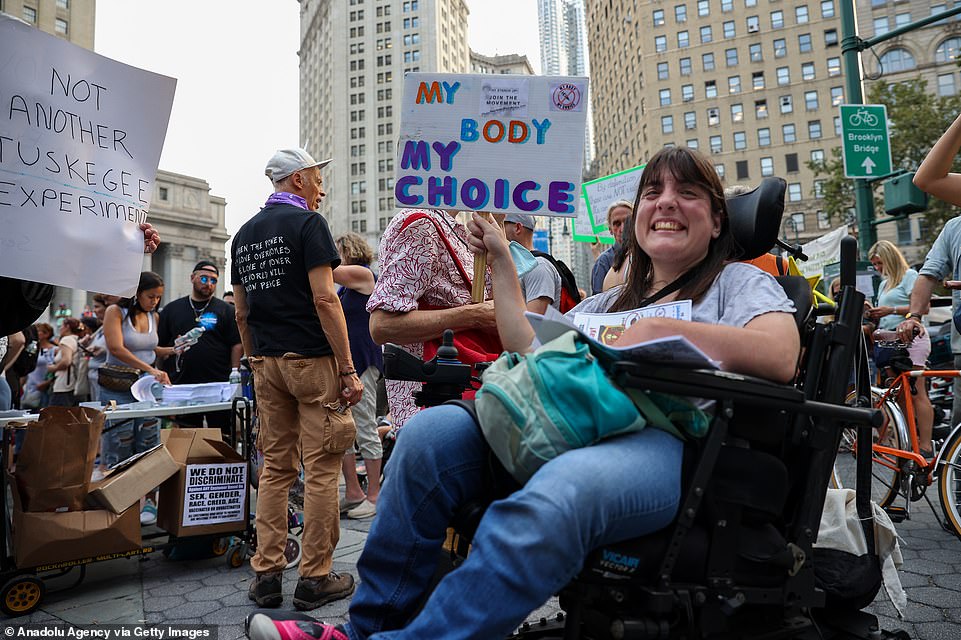 The mandate goes into effect as New York City public health data shows a drop in newly diagnosed cases of COVID-19. Pictured: Anti-vaccine protesters are seen above near New York’s City Hall in Manhattan on Monday. 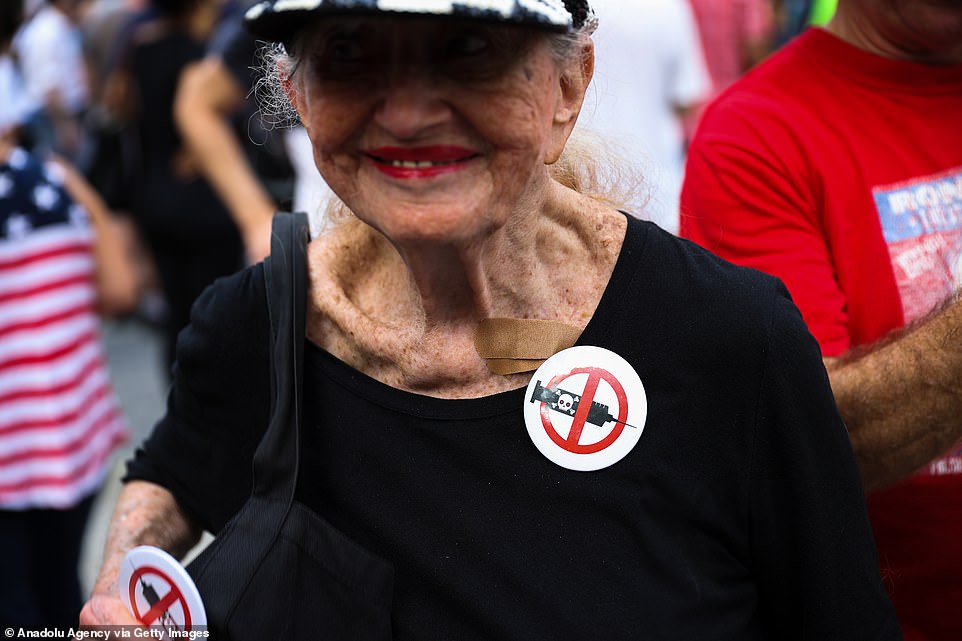 A woman wears buttons showing an injection needle being crossed out in New York City on Monday. 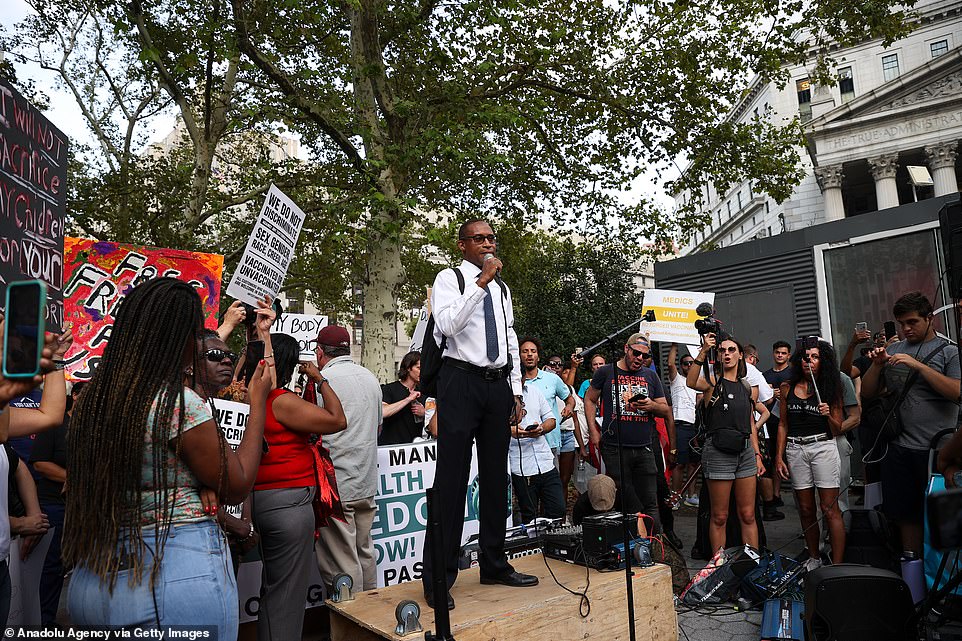 A speaker addresses the crowd during a protest near New York’s City Hall on Monday. 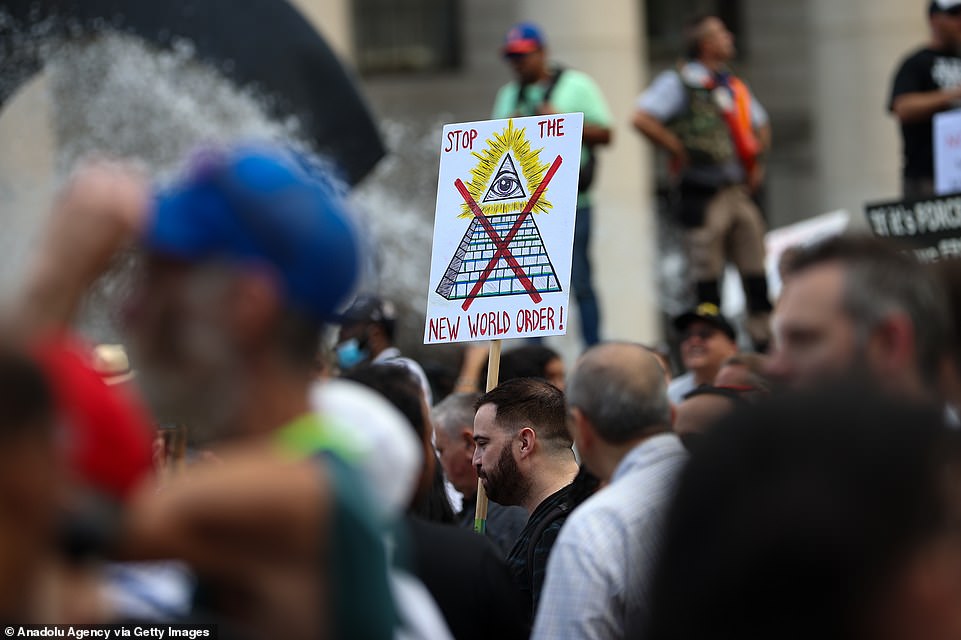 A protester holds a sign during an anti-vaccine demonstration near New York’s City Hall on Monday. 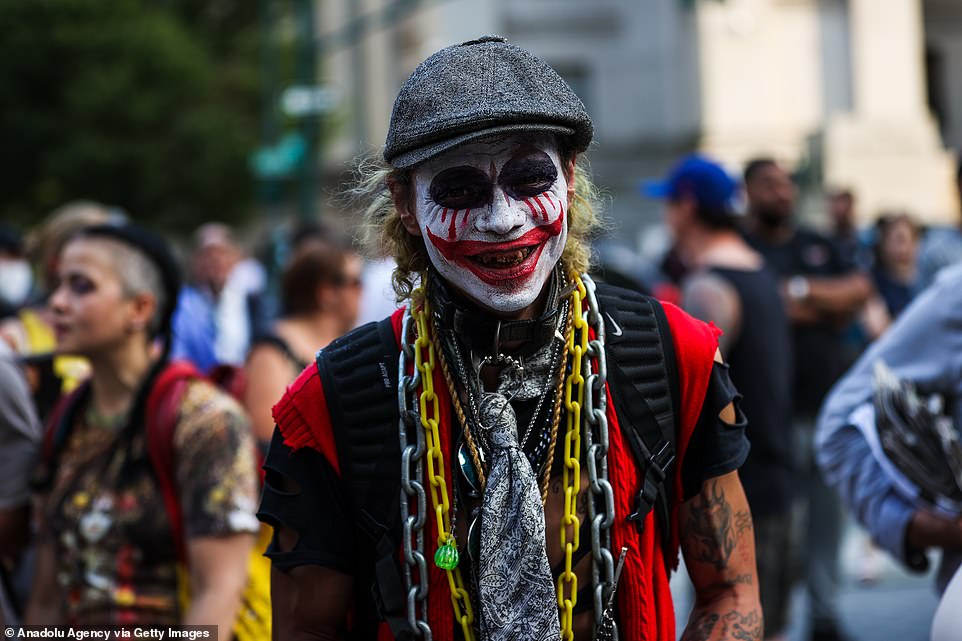 One person who attended the rally dressed up as the Joker in New York City on Monday. 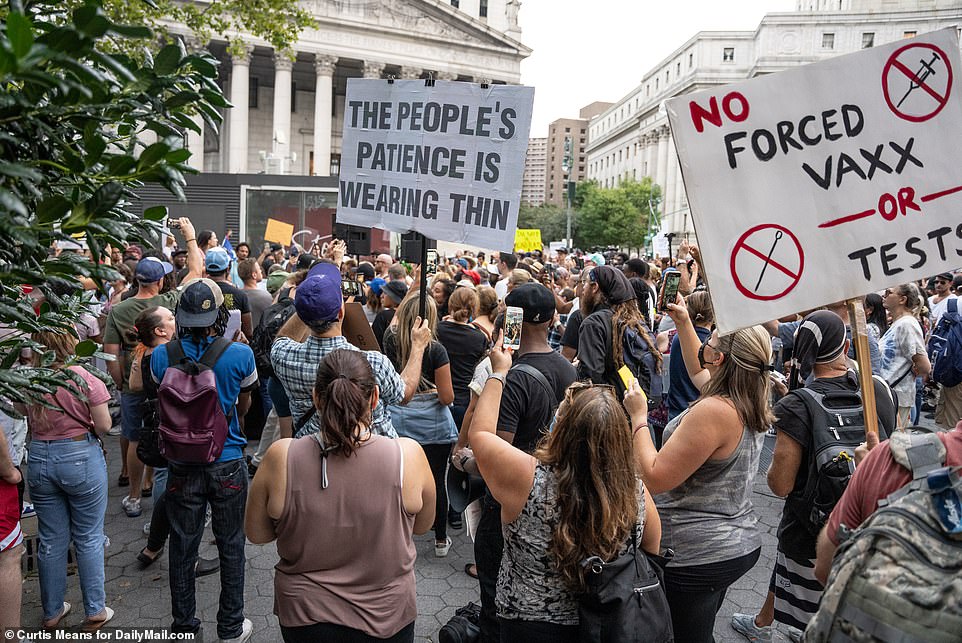 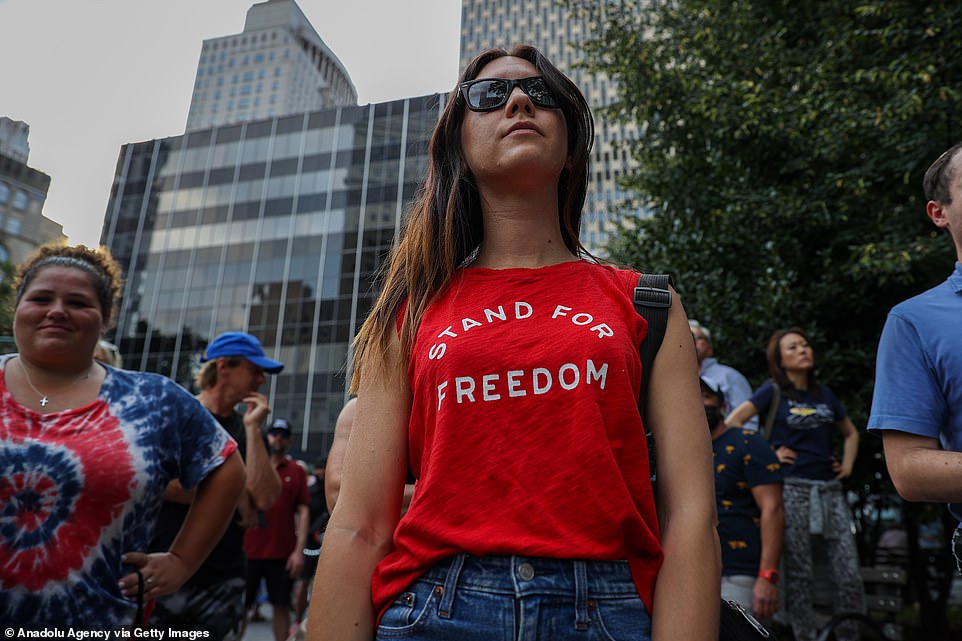 A protester wears a shirt that reads ‘Stand for freedom’ during a demonstration near New York’s City Hall on Monday. 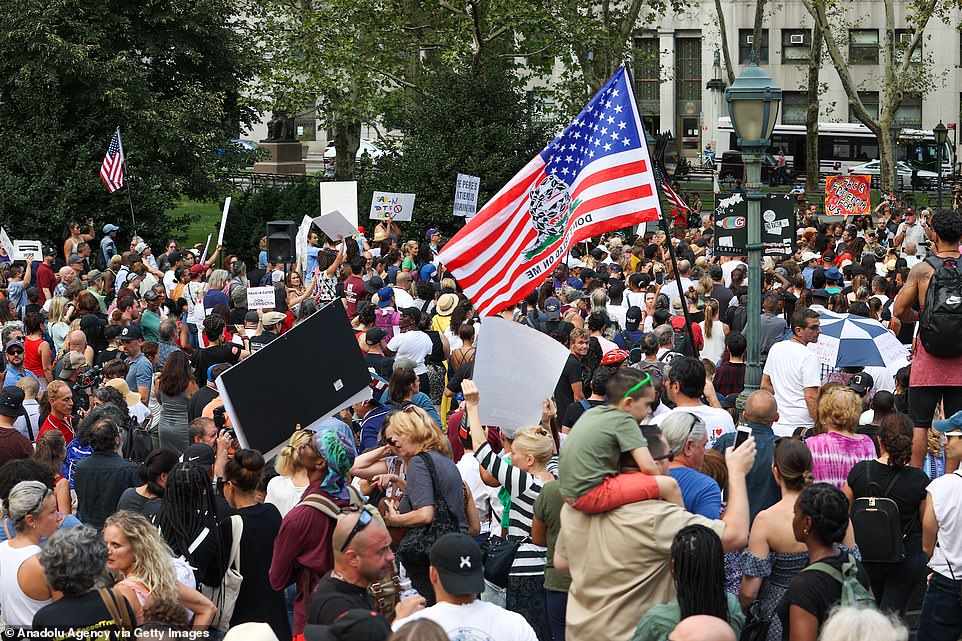 Anti-vaccine protesters are seen above during a demonstration in New York City on Monday. Nationwide, the pace of new COVID-19 infections is continuing to decelerate as the country starts nearing the end of the fourth wave of the pandemic. 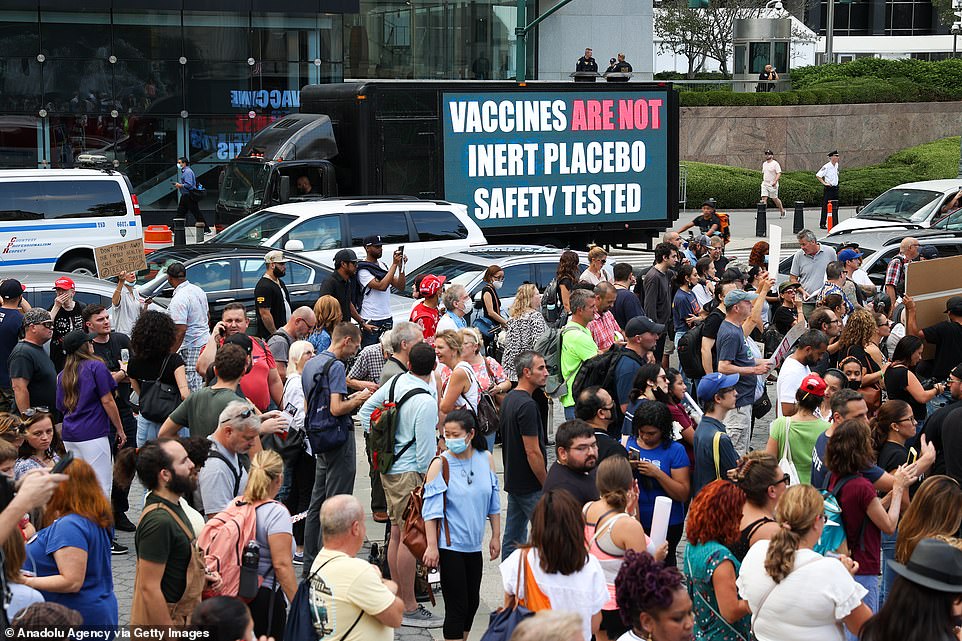 Hundreds of people marched across the Brooklyn Bridge and gathered for a rally near City Hall on Monday. 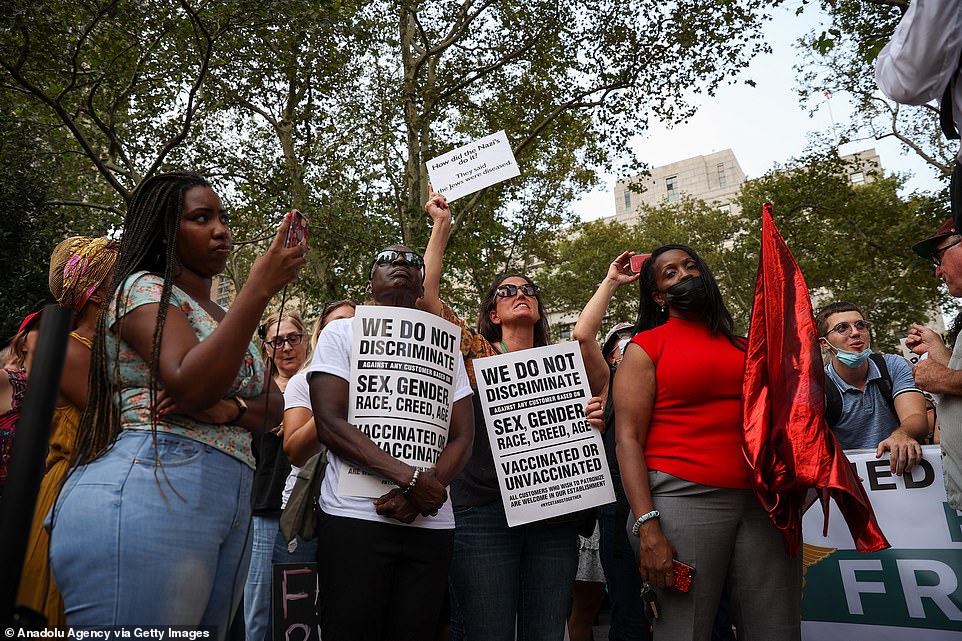 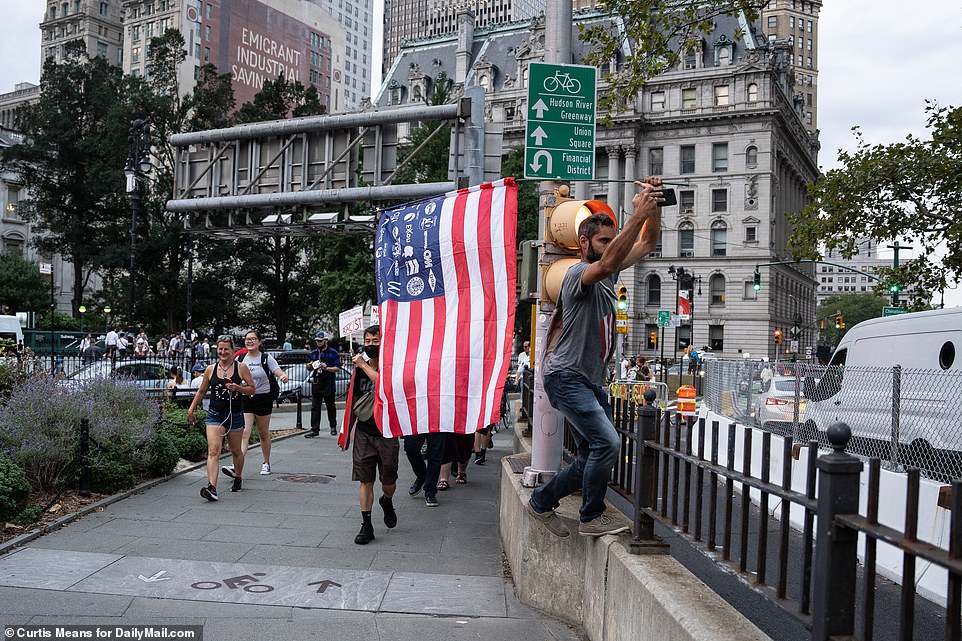 Anti-vaccine protesters are seen above crossing the pedestrian walkway of the Brooklyn Bridge on Monday. 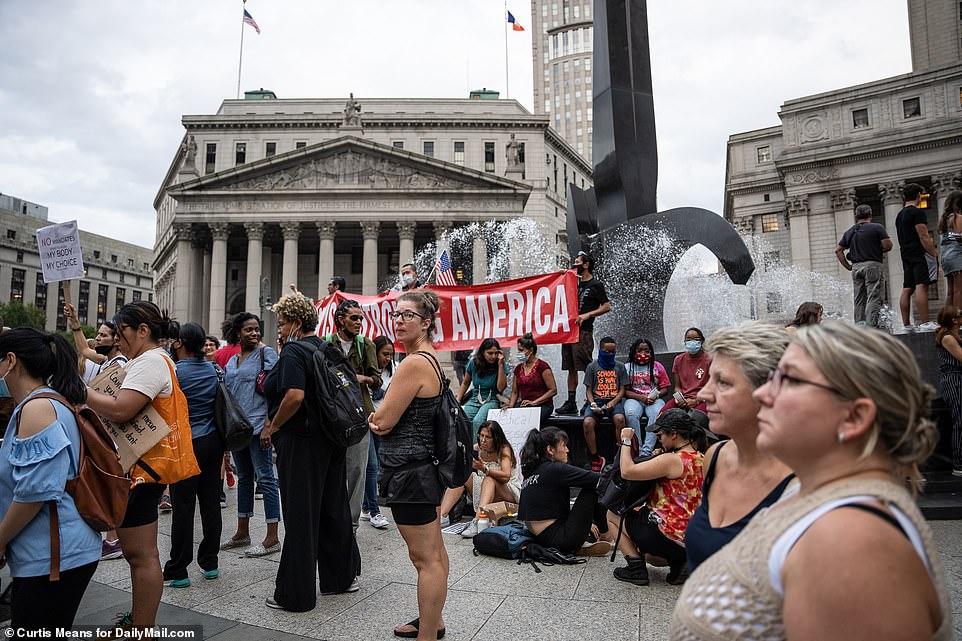 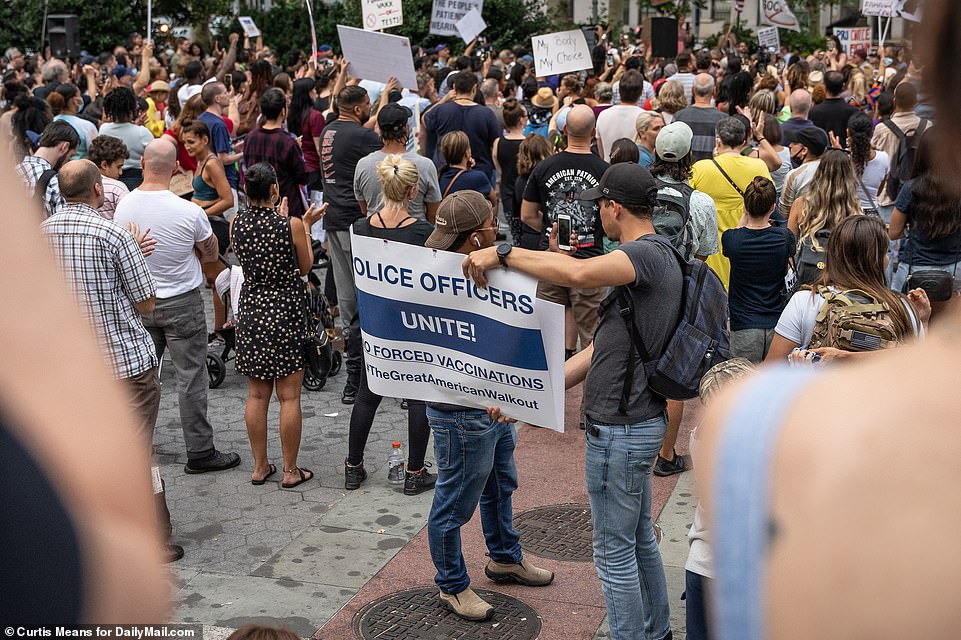 New York City has required all of its public school teachers to get vaccinated or else be fired. 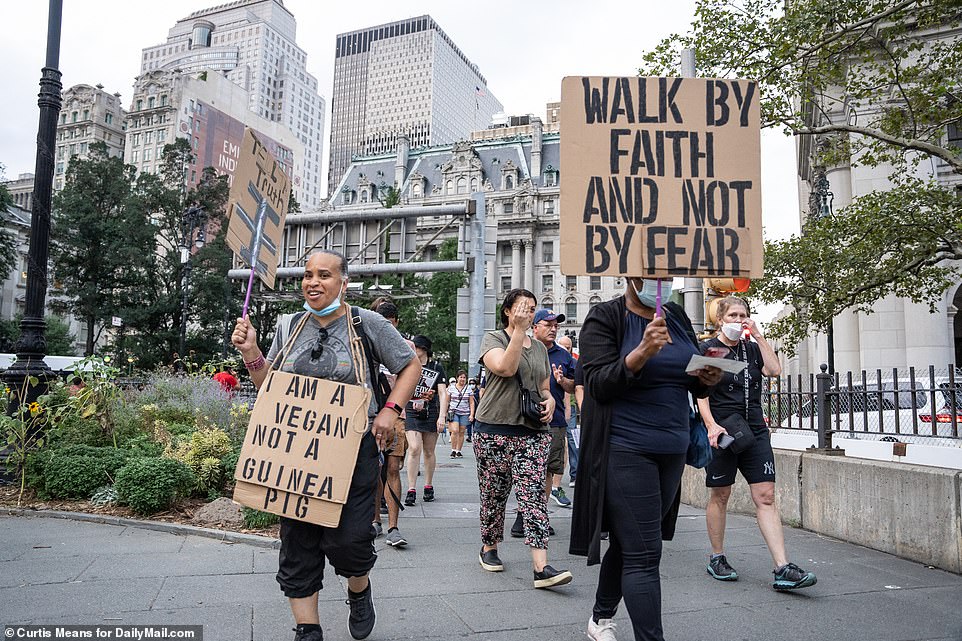 Protesters hold signs that read ‘I am a vegan, not a guinea pig’ and ‘Walk by faith and not by fear’. 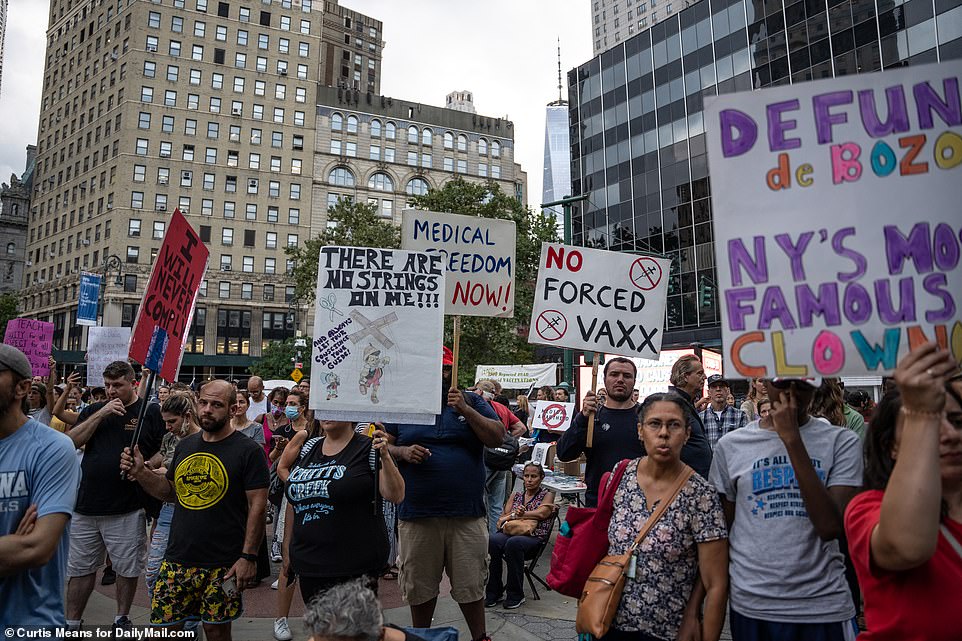 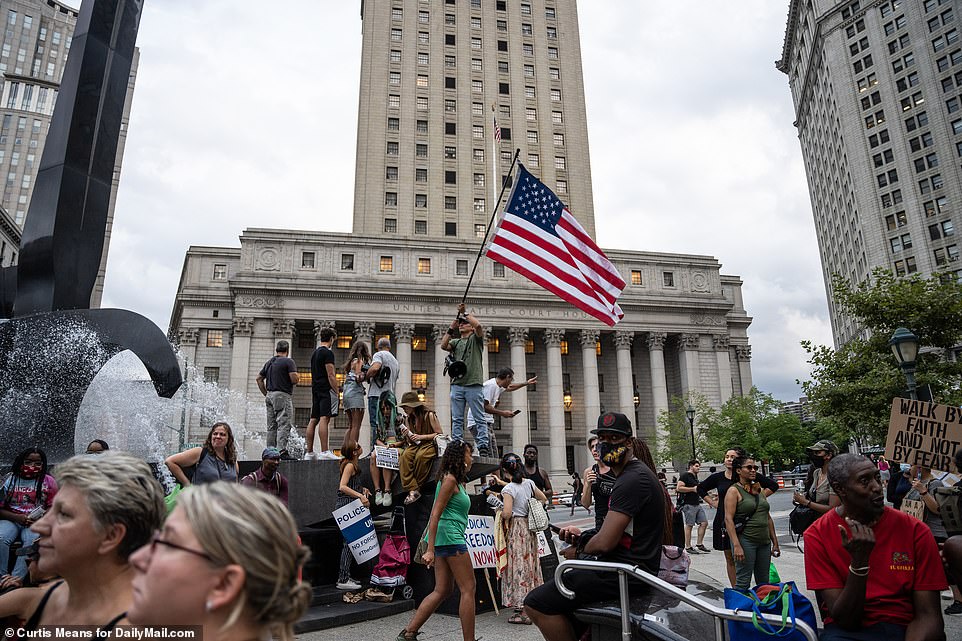 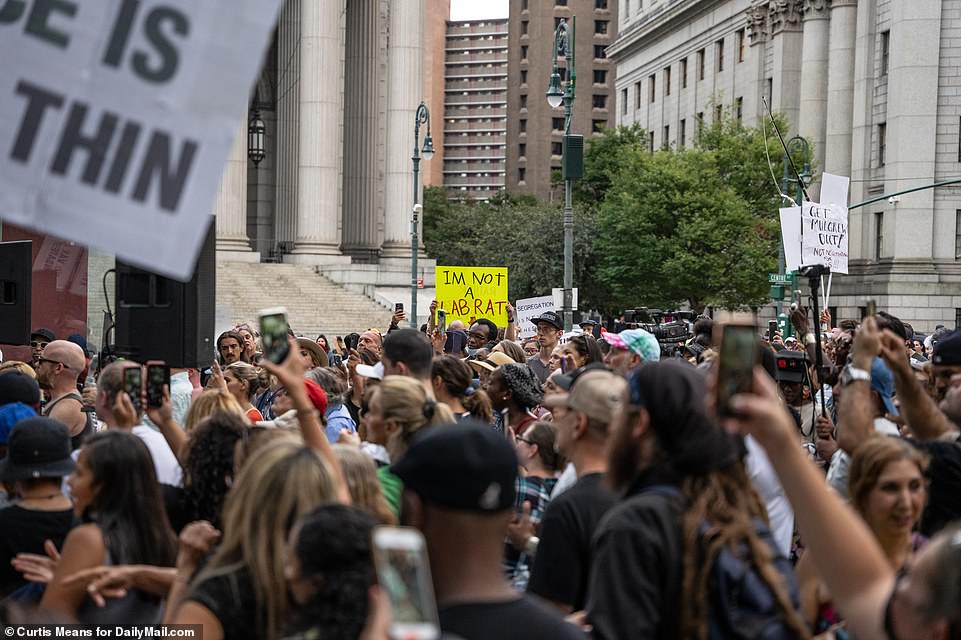 One demonstrator holds a sign that reads ‘I am not a lab rat’ during the protest in New York’s Foley Square on Monday. 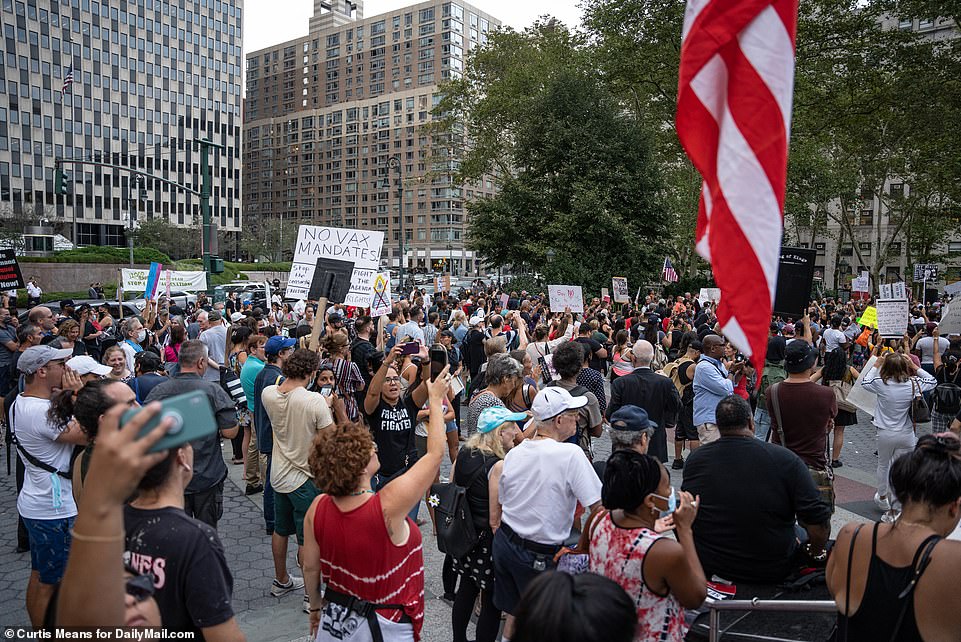 The protest was held on the same day that New York City’s policy requiring bars, restaurants, and gyms to demand proof of vaccination went into effect. 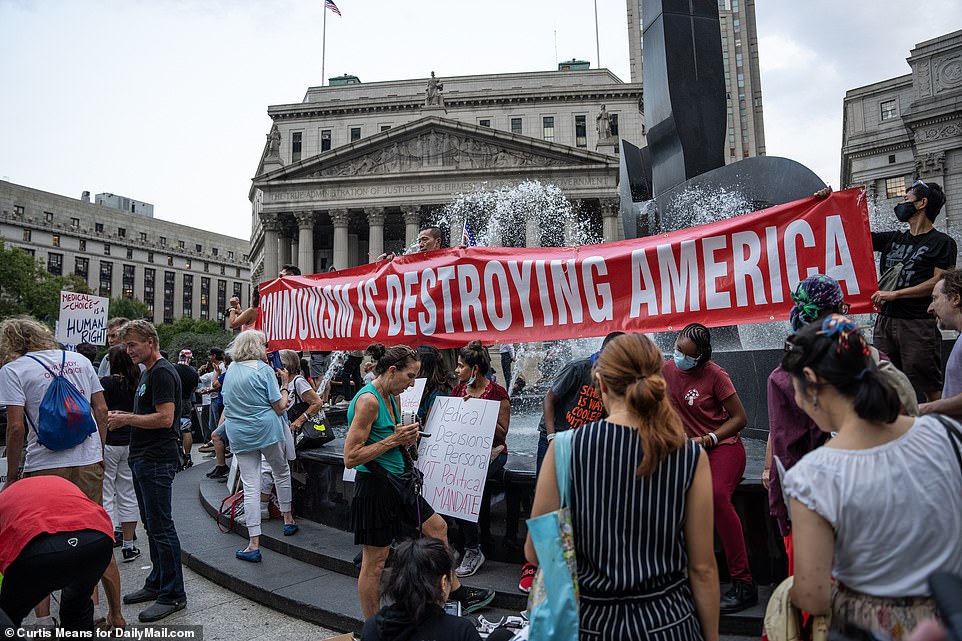 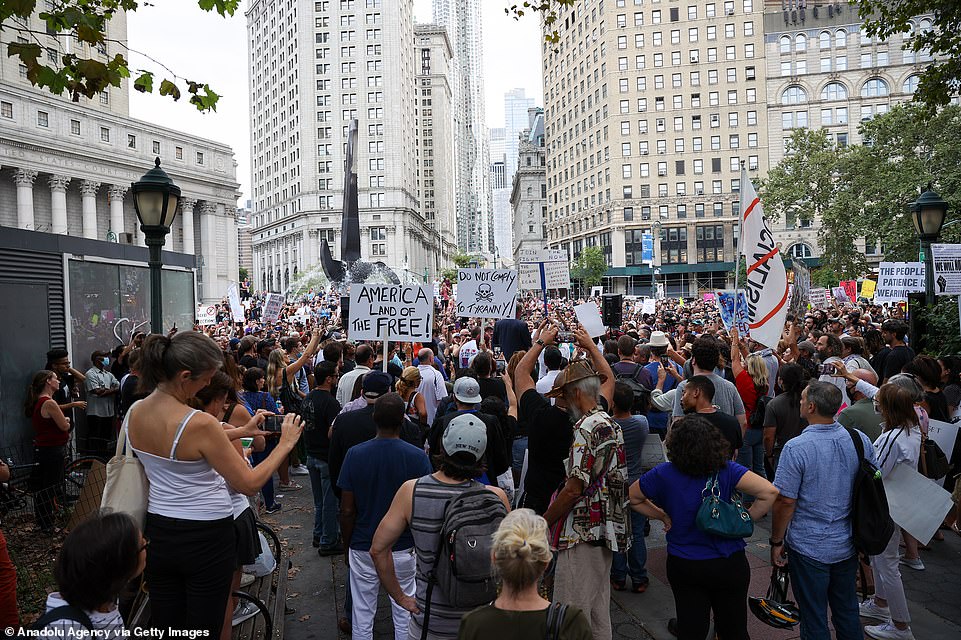 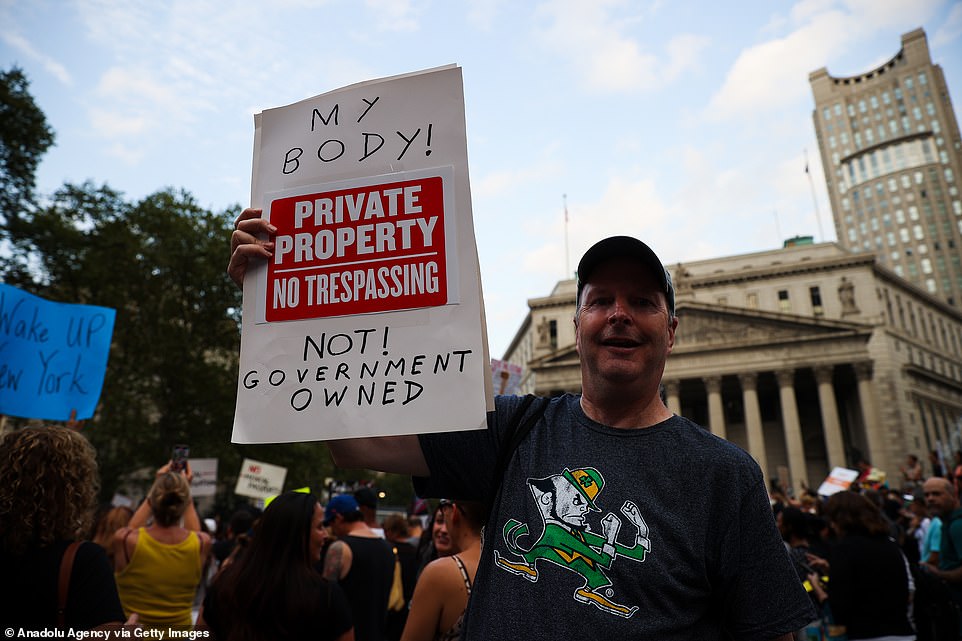 A protester holds a sign that reads ‘My body! Private property – no trespassing…Not government owned’.