Liberal Supreme Court judge Sonia Sotomayor says “there will be many disappointments in the law” and urges people to protest potential nullification of Roe v. Wade

Liberal Supreme Court judge Sonia Sotomayor said on Wednesday that “there will be many disappointments in the law,” while encouraging young lawyers to be “lobbying forces” and change laws they don’t like.

Sotomayor, who was appointed to the Court by President Barack Obama in 2009, spoke virtually at a diversity summit hosted by the American Bar Association, which was covered by The Washington Post and CNN. .

Her comments come just weeks after she released a fiery dissent in response to the Court’s conservative majority decision not to intervene and prevent Texas’ restrictive abortion law from going into effect. 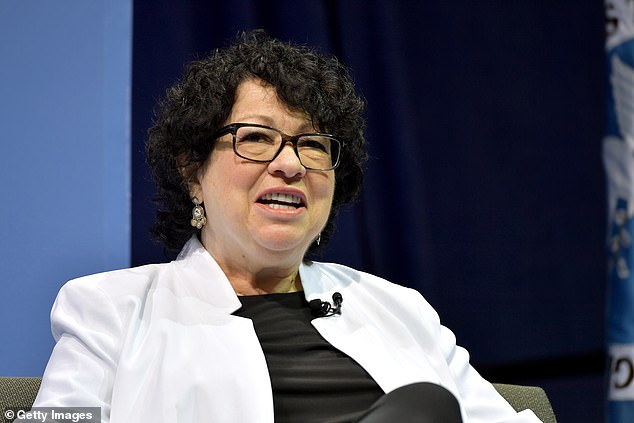 Liberal Supreme Court judge Sonia Sotomayor said on Wednesday that “there will be many disappointments in the law,” as she encouraged young lawyers to be “lobbyists” and change laws they don’t like.

“There will be a lot of disappointments in the law, a lot of it,” Sotomayor told the participants of the ABA seminar. “If you study cases and look at outcomes that you don’t agree with, it can get frustrating.”

“Look at me, look at my dissent,” she remarked.

“At least I have a vehicle, I have a deviant mechanism that I can explain how I feel,” she added.

In the Texas case, Sotomayor got Liberal judges Stephen Breyer and Elena Kagan to sign her slapdown.

Chief Justice John Roberts also voted alongside the Liberals, but wrote his own dissent.

He was nominated by Republican President George W. Bush, but has become a major swing voter.

“The Court’s order is astonishing,” she wrote.

She called the Texas law — which prohibits abortion after six weeks of pregnancy and does not include exceptions for incest and rape — “blatantly unconstitutional.”

Last night, the Court quietly approved a state’s passing of a law that violates federal precedents for nearly 50 years. Today, the Court is late explaining that it has refused to grant an exemption because of the procedural complexity of the state’s own invention,” Sotomayor said.

Sotomayor added that “a majority of judges have chosen to bury their heads in the sand.”

“I can’t change Texas law, but you can,” she continued. “You can, and anyone who likes it or not can go out there and lobby to change laws you don’t like.”

“I’m pointing out that I can’t because they told me not to,” she noted, referring to the fact that judges are not allowed to speak publicly about cases before them.

“But the thing is, there’s going to be a lot of things you don’t like,” she warned.

Before reexamining the Texas statute, the Court will look at a restrictive Mississippi abortion law.