Queen Maxima of the Netherlands visits Gulpen Brewery near Reijmerstok

Queen Maxima of the Netherlands was stunned tonight in a green wrap dress when she attended the festive transfer of the new cultural center in The Hague with her husband King Willem-Alexander.

The Dutch queen, 50, wore a stylish green number with white stripes and a high split which she paired with blue strappy heels.

She pulled back her blond hair and wore her signature dangling earrings, while holding a small navy blue purse that matched her belt and shoes perfectly. 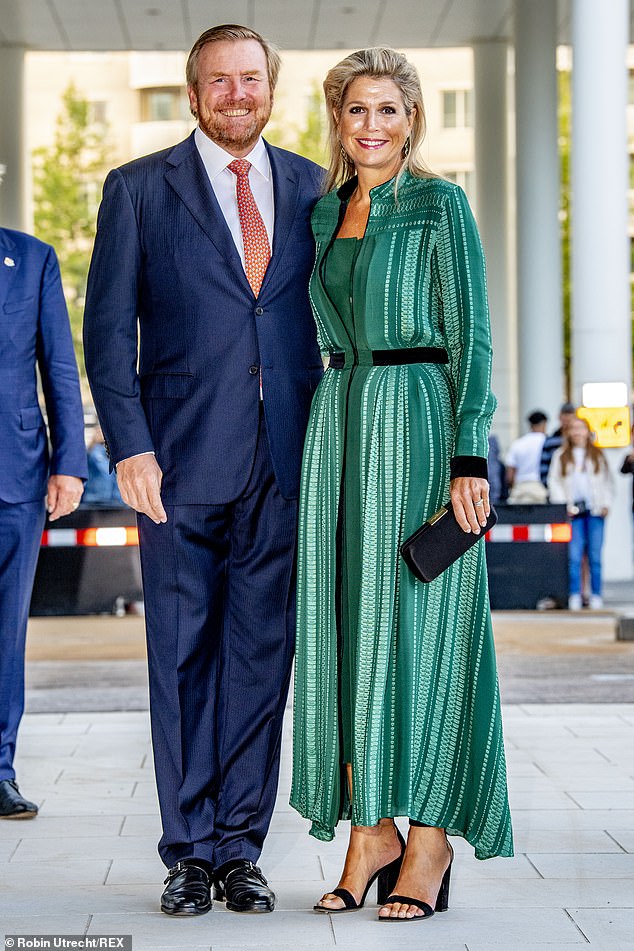 Queen Máxima of the Netherlands was stunned tonight in a green wrap dress when she attended the festive transfer of the new cultural center in The Hague with her husband King Willem-Alexander. 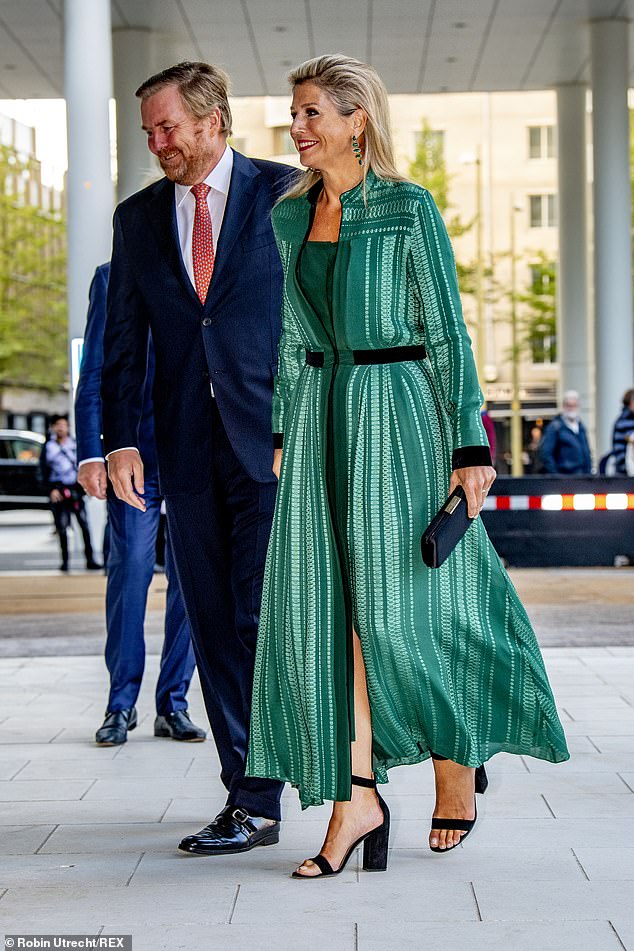 The Dutch queen, 50, wore a stylish green number with white stripes and a high split which she paired with blue strappy heels 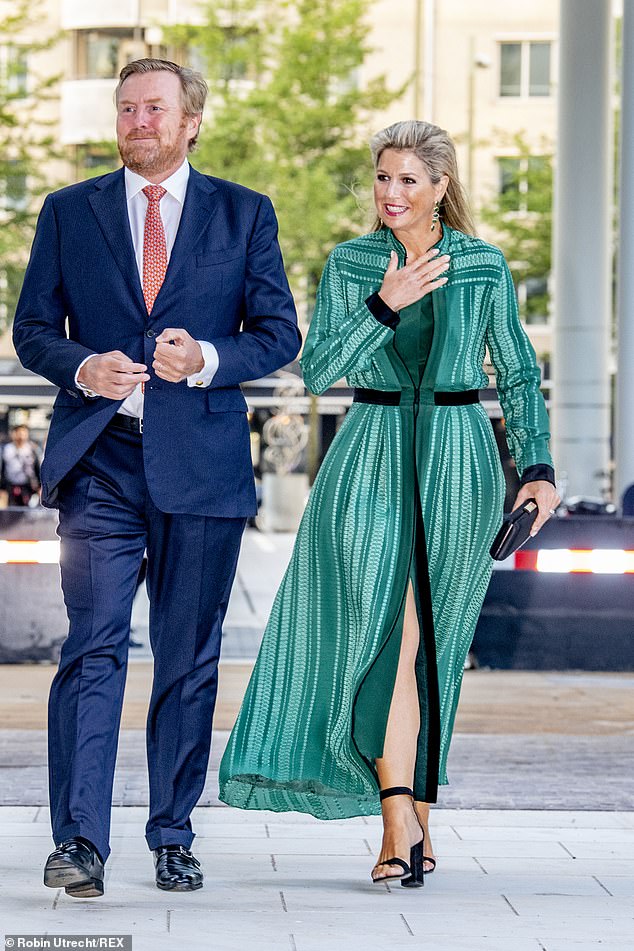 The couple was in The Hague to mark the house as the opening of a new cultural center Amare.

It comes hours after she visited Gulpen Brewery near Reijmerstok this afternoon, where she rolled up her sleeves to try to make beer.

The mother of three was treated to a tour of their own hop fields before the staff showed her to their brewing units, and was even put to work dropping some freshly collected hops into the mix. 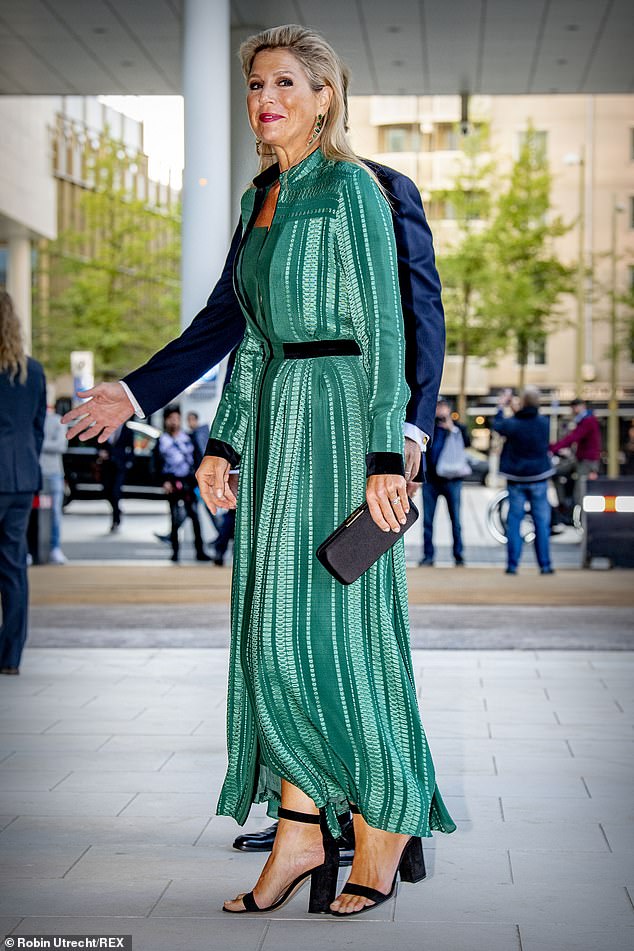 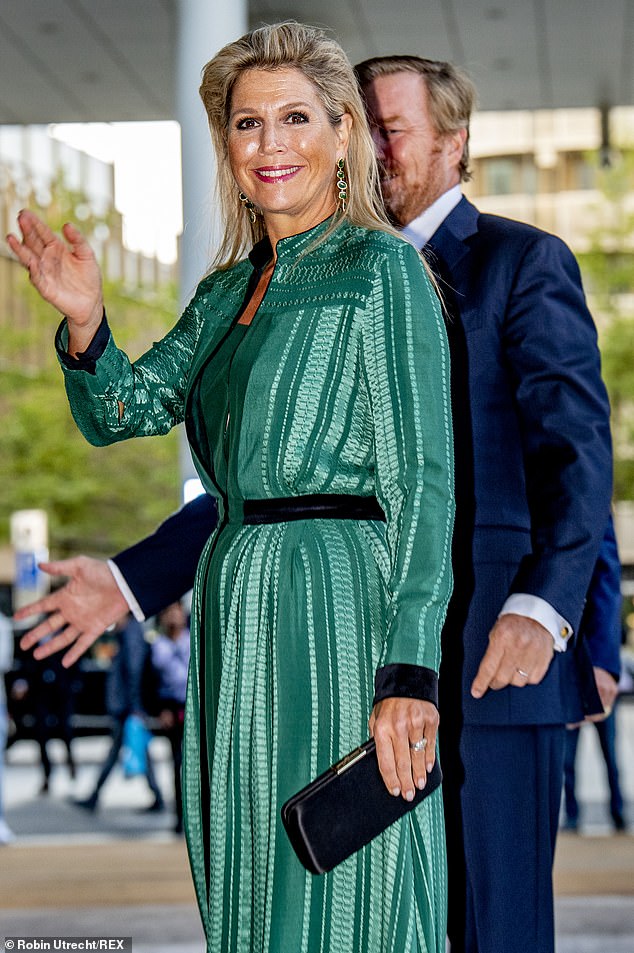 Strike a pose: Maxima looked regal as she waved to crowds of benefactors in The Hague

The Queen of the Netherlands took full advantage of the end of summer and the mild temperature and wore very stylish flared trousers with a crisp white shirt.

Maxima beamed as usual during the working visit to the brewery that received the Plaque for Sustainable Entrepreneurship this year.

She cut a relaxed figure, with her white shirt tucked into the front of her pants, which was ornately patterned with an intricate white motif.

The royal had rolled up her sleeves and revealed a gold bracelet and her watch on her left wrist, as well as a face mask tied to her hand.

She had a small velvet handbag in her hand with a pair of sunglasses at the ready. 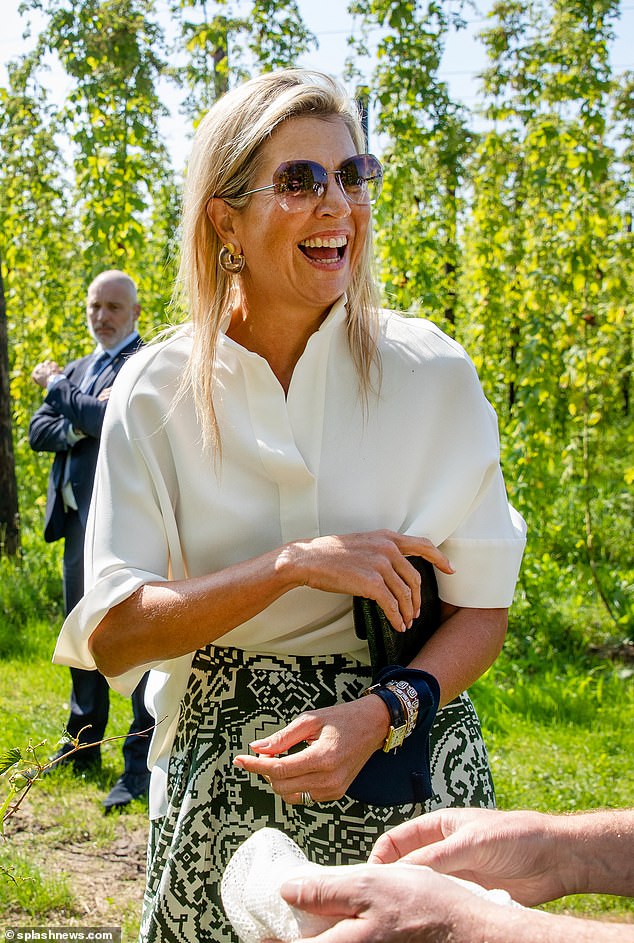 Queen Maxima of the Netherlands, 50, pictured, showed that she was an expected brewer during a working visit to the Gulpener Bierbrouwerij brewery in Gulpen, near Reijmerstok this afternoon. 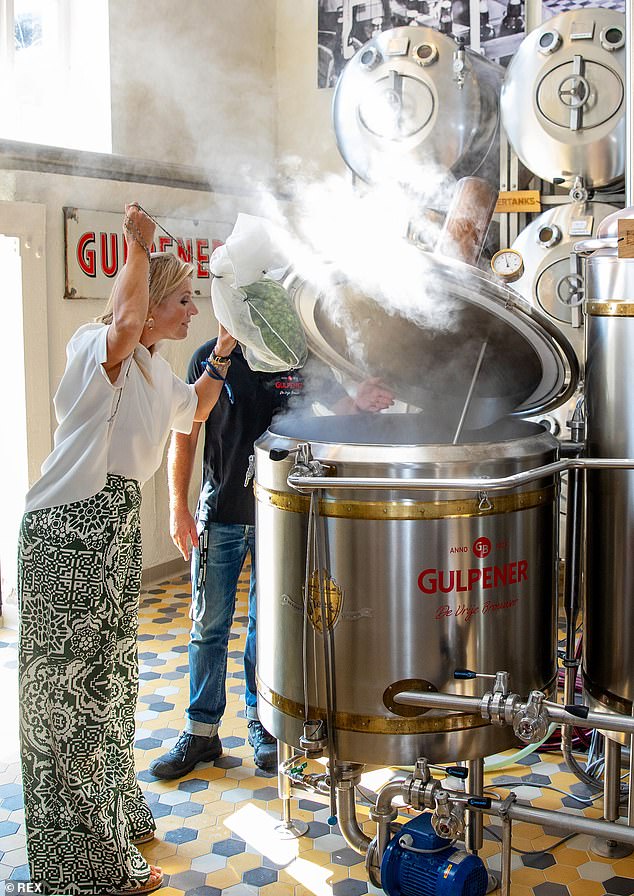 The Dutch Queen was put to work pouring fresh hops into the brew kettle, where it will be made into beer, pictured 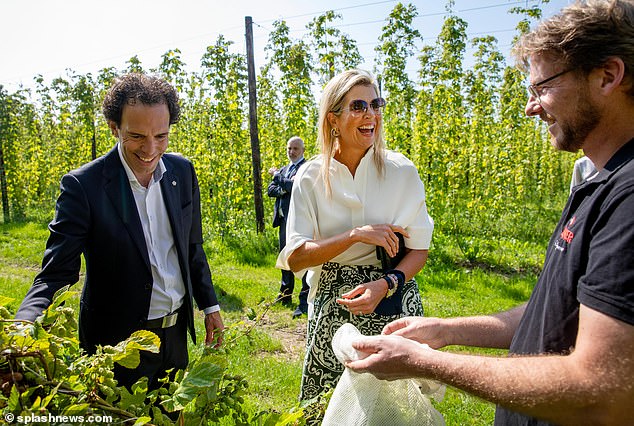 Maxima took a tour of the property and was told all about the beer brewing process during her visit, pictured 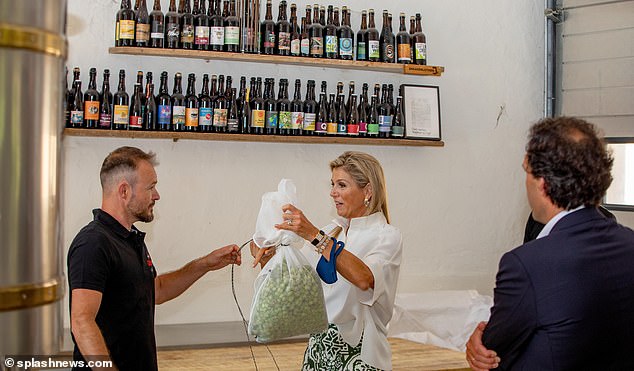 A staff member handed the Queen a bag of hops collected from the brewery’s own field, pictured

Her blonde locks were styled straight and tucked behind her ears, with diamond earrings completing the look.

The royal was glee personified as she exchanged words with the brewery staff, who guided her through the various stages of beer making.

Outside, one of the brewers showed the queen which hops were ready and which had yet to mature.

She even got to give a personal touch to the beer mix the brewery was making when a staff handed her a packet of freshly collected hops from the field.

Maxima poured the bag into one of the brew groups and took a careful step back when some steam came out. 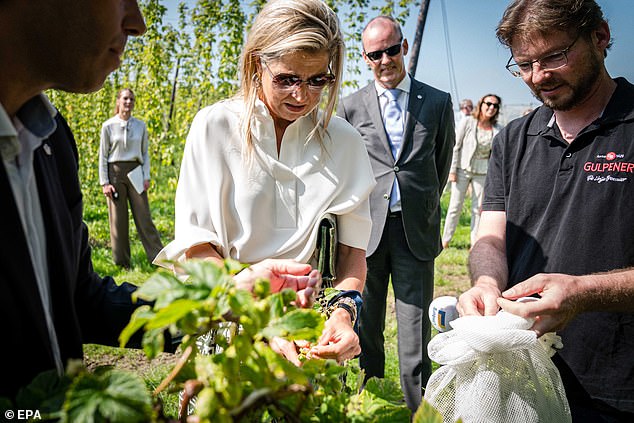 Maxima put on her sunglasses today to explore the hop field during her visit to the Guloen Brewery, in the photo 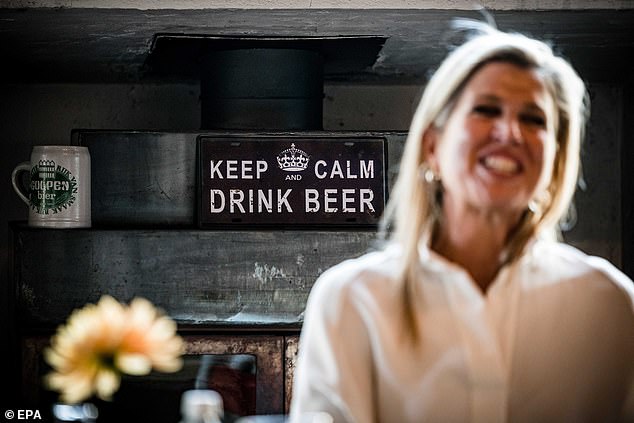 A sign behind the monarch boldly reads ‘keep calm, drink beer’ in a play on the British motto ‘keep calm and carry on’

It was back to work for Maxima, who said goodbye to her middle daughter Alexia, 15, who came to study in the UK at UWC Atlantic College in Wales on Monday.

She signed up on a £67,000, two-year course to study for her International Baccalaureate degree alongside heir to the Spanish throne, Princess Leonor, 15.

Located in a 12th-century castle in the Vale of Glamorgan, the school offers activities and subjects such as Tai Chi and Tibetan literature, earning it the nickname ‘Hippie Hogwarts’. 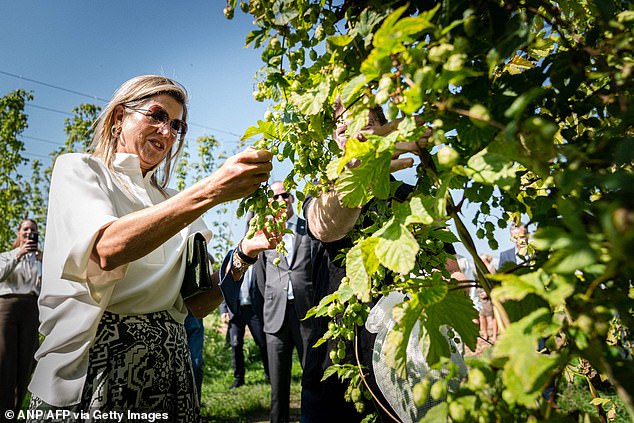 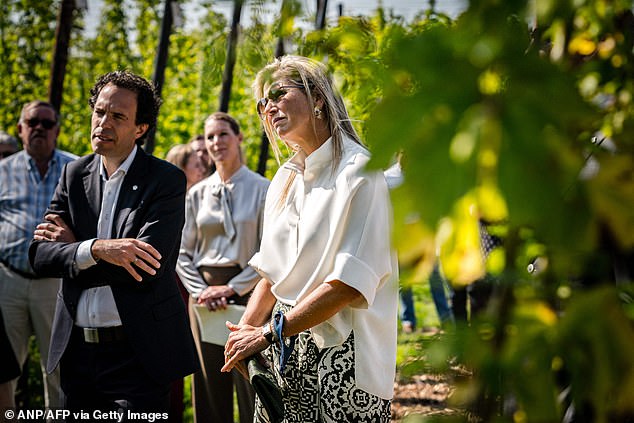 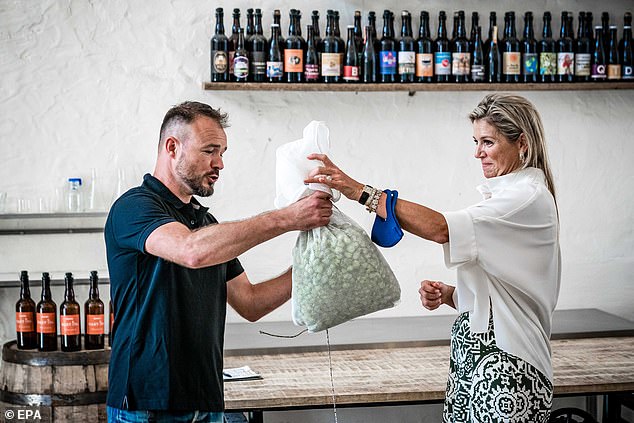 An employee, depicted handing Maxima the hops. The royal’s blond hair was styled straight and she wore gold jewellery, with a face mask dangling from her arm 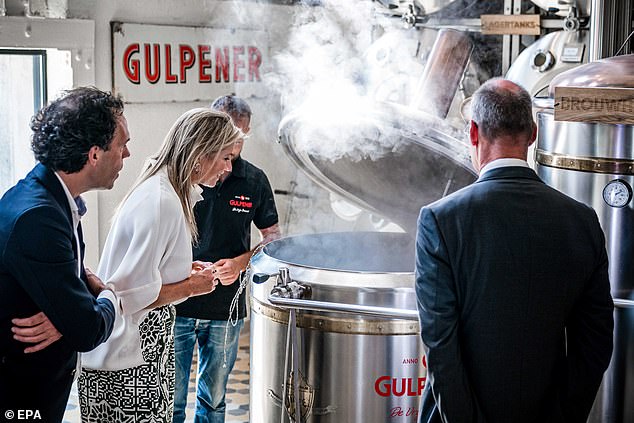 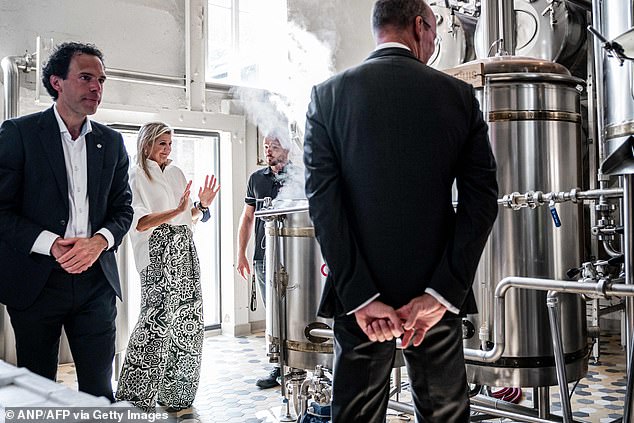 Virat Kohli makes thoughtful changes to his game, but falls into the hands of Ollie Robinson

More than 1,000 US citizens and Afghan allies were evacuated through a secret CIA base