An injured NRL star’s X-rated outburst has become the shortest mid-game live TV interview in the history of the sport, shocking some viewers and delighting others.

Parramatta Eels hooker Reed Mahoney has been sidelined from the club’s football final due to a shoulder injury that ended his season last month.

While the Eels trailed Newcastle Knights 10-6 in Sunday’s elimination final, Nine’s Wide World of Sport cut him at home on Zoom for his first-half impressions.

But when asked by the commentator what he thought of the opening phase, he simply replied, “F***ed!” 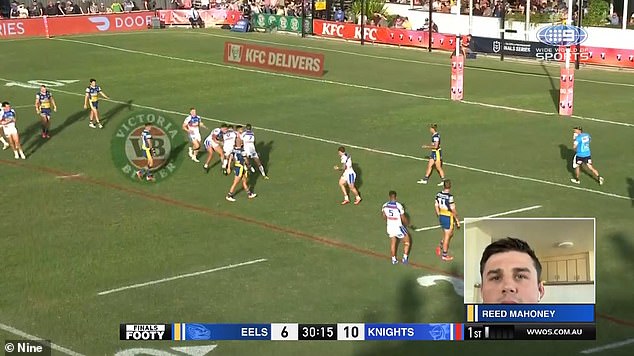 Injured NRL star Reed Mahoney’s X-rated outburst has become the shortest mid-game live TV interview in the history of the sport, shocking some viewers and delighting others

It’s not clear if he realized he was on live TV at the time.

Mahoney then looked off the screen, possibly at his TV at home when he saw he was on the air, then fixed his laptop camera and yelled, “Oh-hoh!”

He looked stunned as he appeared to play with the settings on his computer before Nine finally cut the feed.

The commentator ignored the swearing and added, “I’m not sure if Reed got us. Let’s fix that and call him back…’ 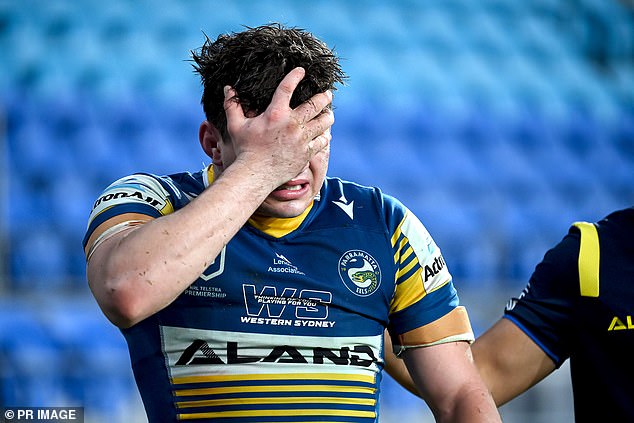 When Reed Mahoney (pictured) was asked by the commentator what he thought of the opening stages as his side chased Eels Newcastle Knights 10-6, he simply replied, ‘F***ed!’

Twitter praised the interview as “perfect” and “the best ever” and one user added: “Quality comment there from Reed Mahoney.”

Others said they wanted to vote for him as Man of the Match.

Former NRL star and current Kangaroos coach Meninga famously retired from politics midway through a radio interview after being confused by questioning.

The Eels came back almost immediately after Mahoney’s outburst and went into the break with a 16-10 lead, before sealing the second half with a 28-20 win.