“I scored and it fell off in the end zone,” Jones told ESPN’s Lisa Salters. “So I’m going to look for it, but he’d be happy. He would say, ‘If you lose it somewhere, lose it in the end zone.’

Jones described the piece as a “necklace with a football” containing his father’s ashes. Photos from the match show him holding up a black chain with a pendant in the shape of a football. 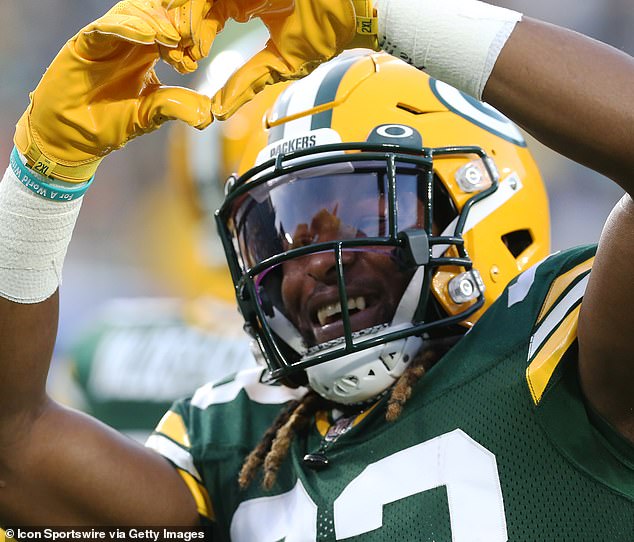 Green Bay Packers star Aaron Jones lost a necklace containing his late father’s ashes (pictured) during Monday night’s win over the Detroit Lions. In this photo, 26-year-old Jones is seen with the hanger before kick-off at Lambeau Field in Green Bay 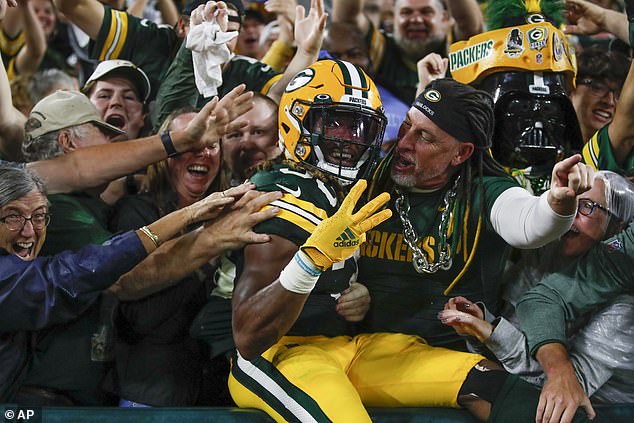 It’s hard to pinpoint the exact moment the chain was lost, especially since Jones had three receiving touchdowns and a hasty score in the 35-17 win. He also popped into the crowd a few times at a celebration known as the “Lambeau Leap,” which takes its name from Lambeau Field in Green Bay.

A fan theory on social media was that Lions safety Will Harris ripped the chain off as he tried to strip Jones from football during his fourth quarter one-yard touchdown run.

The win was bittersweet for Jones, who played his first game at Lambeau Field since his father, Alvin Jones Sr., died of COVID-19 complications earlier this year at age 57. Jones Sr., a 29-year military veteran, had attended all of his son’s Packers games since his retirement.

And if Jones can find the necklace, that sequence can continue.

“The field personnel were looking for it,” Jones told Salters. “We’ll find it, we’ll find it.”

Jones dedicated his current season to his late father in May, following the death of Jones Sr. in April.

“Heart torn into a million pieces,” Jones wrote at the time.

“I can’t even imagine match days without you by my side. I haven’t missed a game in 9 years and it scares me to think about it but I know you got the best seat in the stadium and you’re engraved in me forever and I’ll carry our name high and be great like you pushed me all my life! I could write a book and go on and on, but now it’s time to be a man and hang on. I’ve got you, Daddy.’

Joe Manchin ‘raised his FIST to Bernie Sanders’ in…