One in TWENTY children had Covid on any day last week

One in 20 children in England was infected with Covid on any given day last week, official data revealed today amid fears a fourth wave could be just around the corner.

The Office for National Statistics estimated today that 658,800 people in England had the virus as of September 25, 6.2 percent more than the previous weekly figure.

Analysis showed that the virus is most common in children aged 11 to 16, with an estimated 4.6 percent of them infected – the equivalent of about one infected student in each classroom.

As the outbreak among students has exploded since they bounced back in early September, some scientists have urged high schools to immediately reintroduce face masks to prevent infections from spreading to the rest of the population.

Meanwhile, Staffordshire County Council bosses today urged 500 schools to be “proactive” and reintroduce the infection control measures scrapped by No10 in mid-May, including calling and contact tracing.

The ONS data, closely watched by ministers, barely changed in other age groups last week, despite a range of other official statistics indicating that the outbreak has already started to spread.

A scientist behind one of the country’s largest Covid surveillance studies warned yesterday that infections are now spreading up the “generation ladder.” 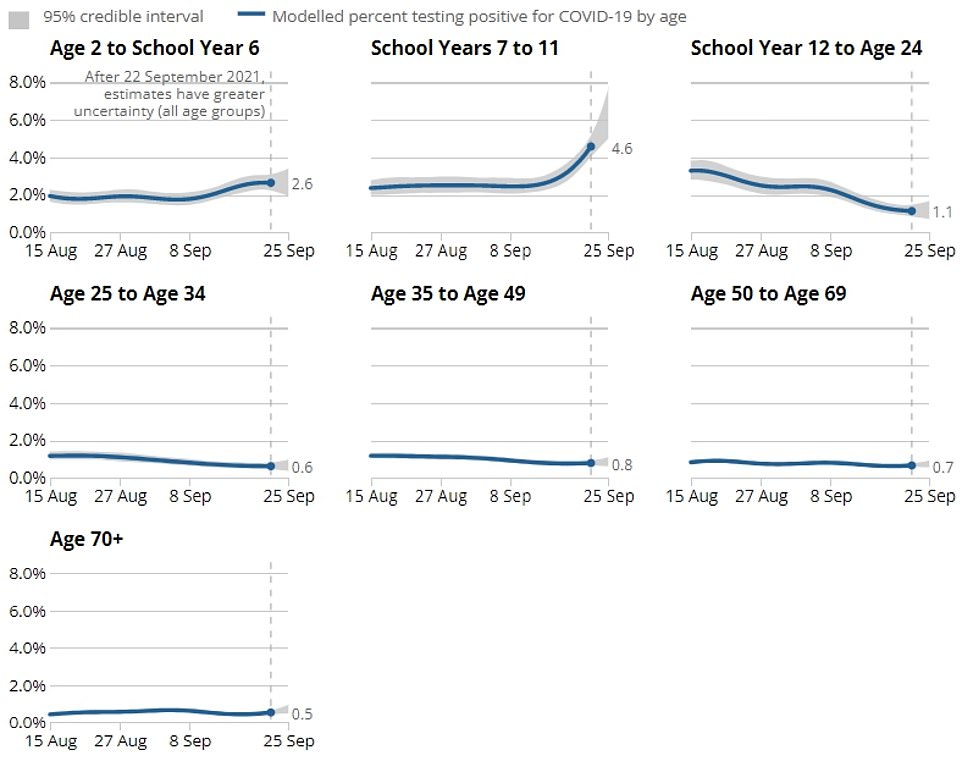 The charts show estimates from the Office for National Statistics for the percentage of people who tested positive in England for different age groups from August 15 to September 25. The virus was most common in children aged 11 to 16, with an estimated 4.6 percent of them having been infected – the equivalent of about one infected student in each class 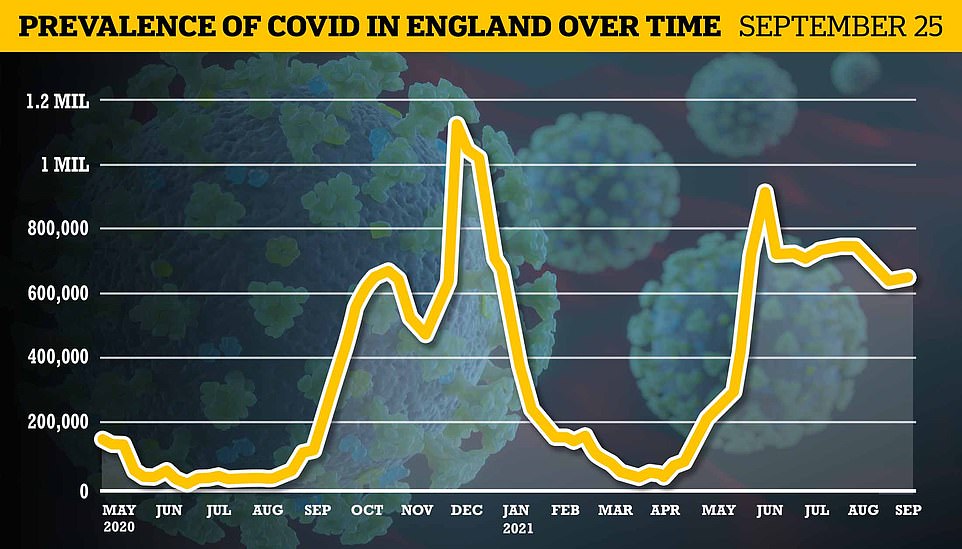 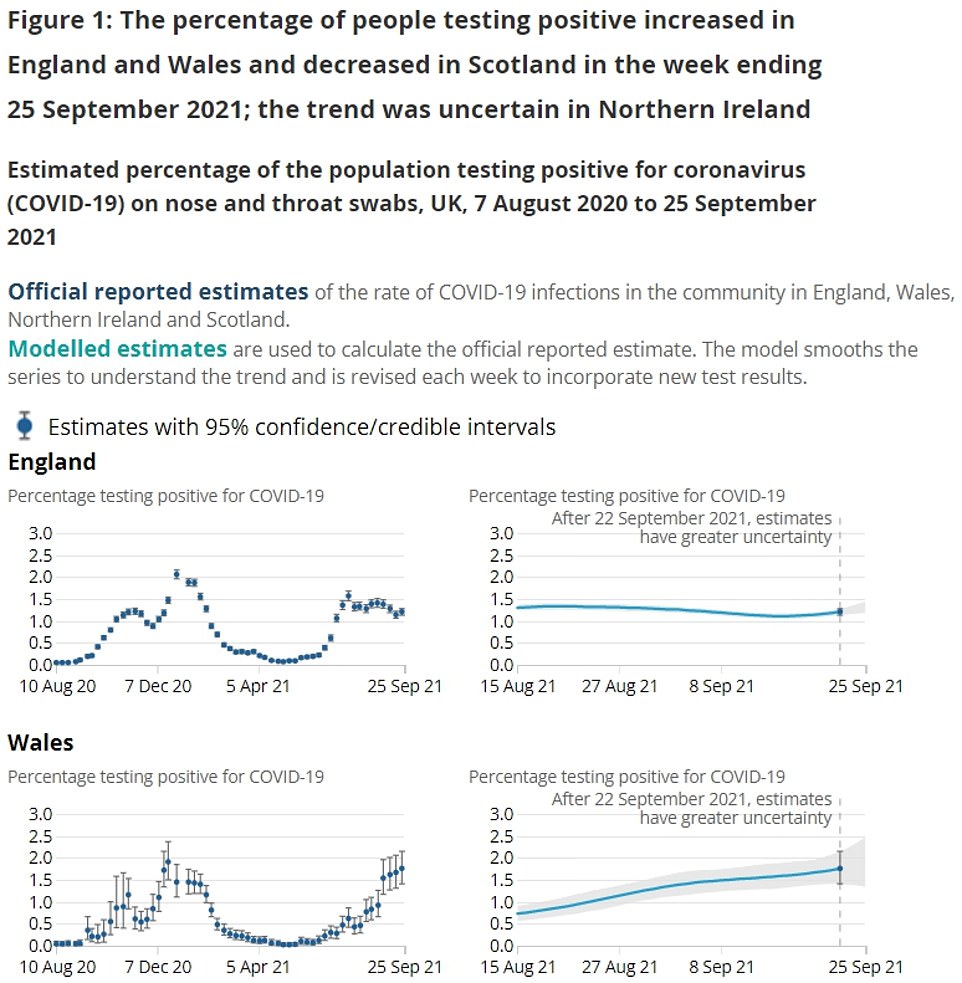 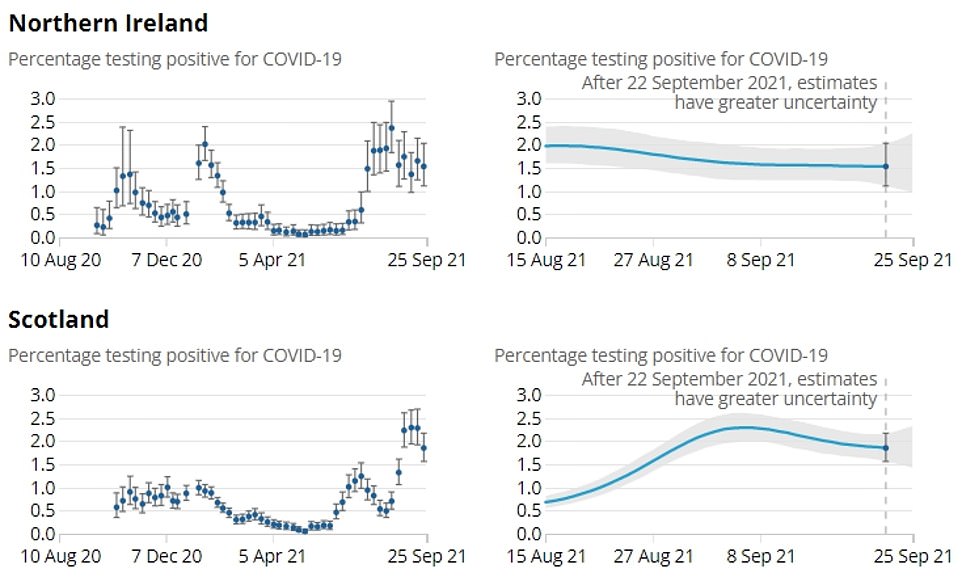 The estimated infection rate among 11- to 16-year-olds in England is an increase from the 2.8 percent believed to be infected a week earlier.

Children aged two to 10 have the second highest infection rate: about one in 40 (2.6 percent) of them thought they had the virus on a particular day last week, compared to 2.3 percent a week earlier.

Cases are also rising among the over-70s, with an estimated 0.5 percent of them infected, compared to 0.4 percent last week.

Depression rates are 70% higher than pre-Covid but have fallen since lockdown was lifted over the summer, official survey shows

Depression rates in Britain are falling after rising during the Covid pandemic, official data shows.

The Office for National Statistics estimated that 10 per cent of adults in the UK were depressed before the virus first struck.

This more than doubled to a record 21 percent last winter after two brutal waves of the epidemic and three lockdowns, with women and young people hardest hit.

The ONS estimates the share fell to 17 percent last month, based on a rolling survey of nearly 14,000 people across the country.

Lockdowns, social isolation, job loss and fear of the pandemic have all been linked to higher rates of depression in other studies.

Most Covid and social restrictions have been lifted in the UK since the summer, despite some variation between countries.

In Scotland and Wales, for example, it is mandatory to wear a face mask in most public indoor areas.

The leave scheme expired this week and there are concerns that it could lead to a wave of job losses.

But in all other age groups, cases are falling or falling.

The rise of cases among younger groups led Staffordshire County Council to tell schools to take back extensive measures to curb the outbreak in the area, where the number of infections has risen by 28.8 per cent in a week.

The council said students must wear face coverings, while staff must remain 2 meters away from students. And there should be no full-staff meetings or school events, such as meetings, it advised.

It also told students living with someone who tests positive to stay at home until they get a negative PCR test, despite not being able to legally enforce this measure.

Professor Christina Pagel, a mathematician at University College London, this week called for a reduction in infection control measures at the national level.

She said: “I think we need to start taking measures in schools again, especially masks in high schools, and roll out the vaccine a little faster.”

Professor Pagel warned of rising infection rates among children, the risk of them suffering from ‘long Covid’ and a slow vaccine roll-out meant action had to be taken to limit the spread of the virus.

It’s because the ONS data shows that infections in the UK are a mixed picture. Cases are on the rise in England and Wales, where an estimated one in 85 (1.21 percent) and one in 55 (1.76 percent) people respectively had Covid last week.

Meanwhile, the number of cases in Scotland, where one in 65 people (1.85 percent) was infected last week, is falling from one in 45 (2.28 percent) in the seven days to September 18.

And one in 65 people in Northern Ireland (1.53 percent) had the virus last week, down from one in 60 a week earlier, according to official estimates. 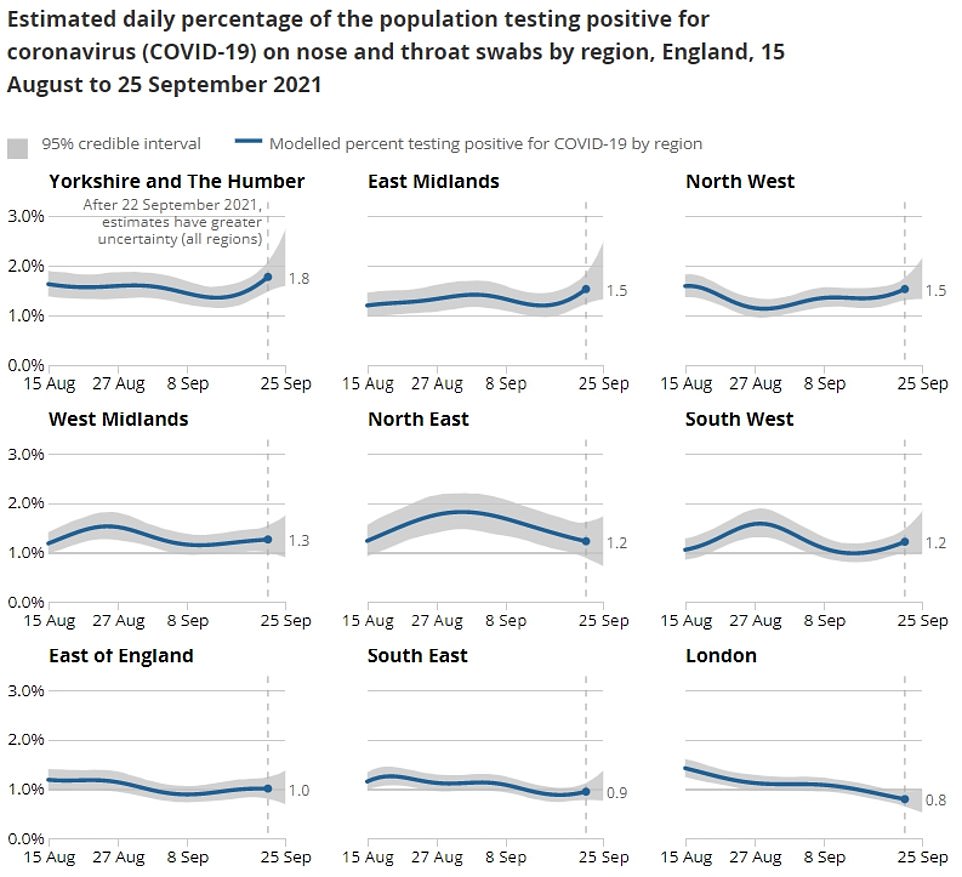 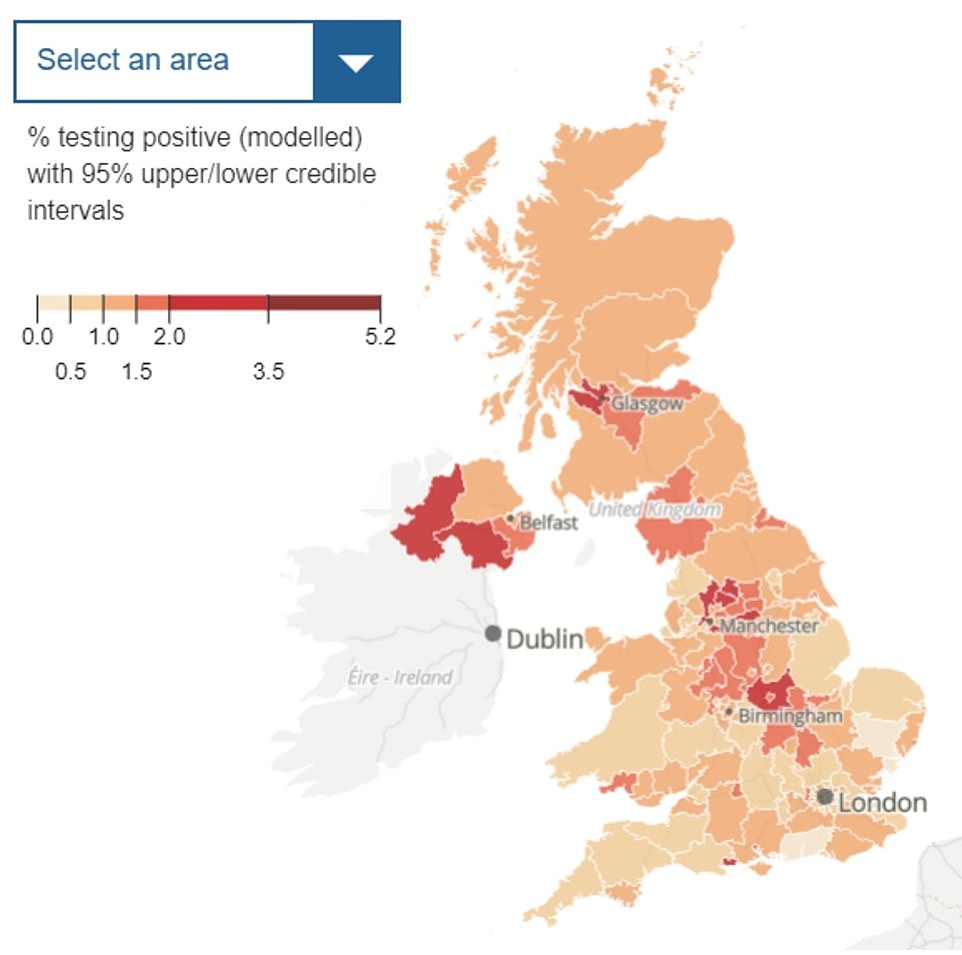 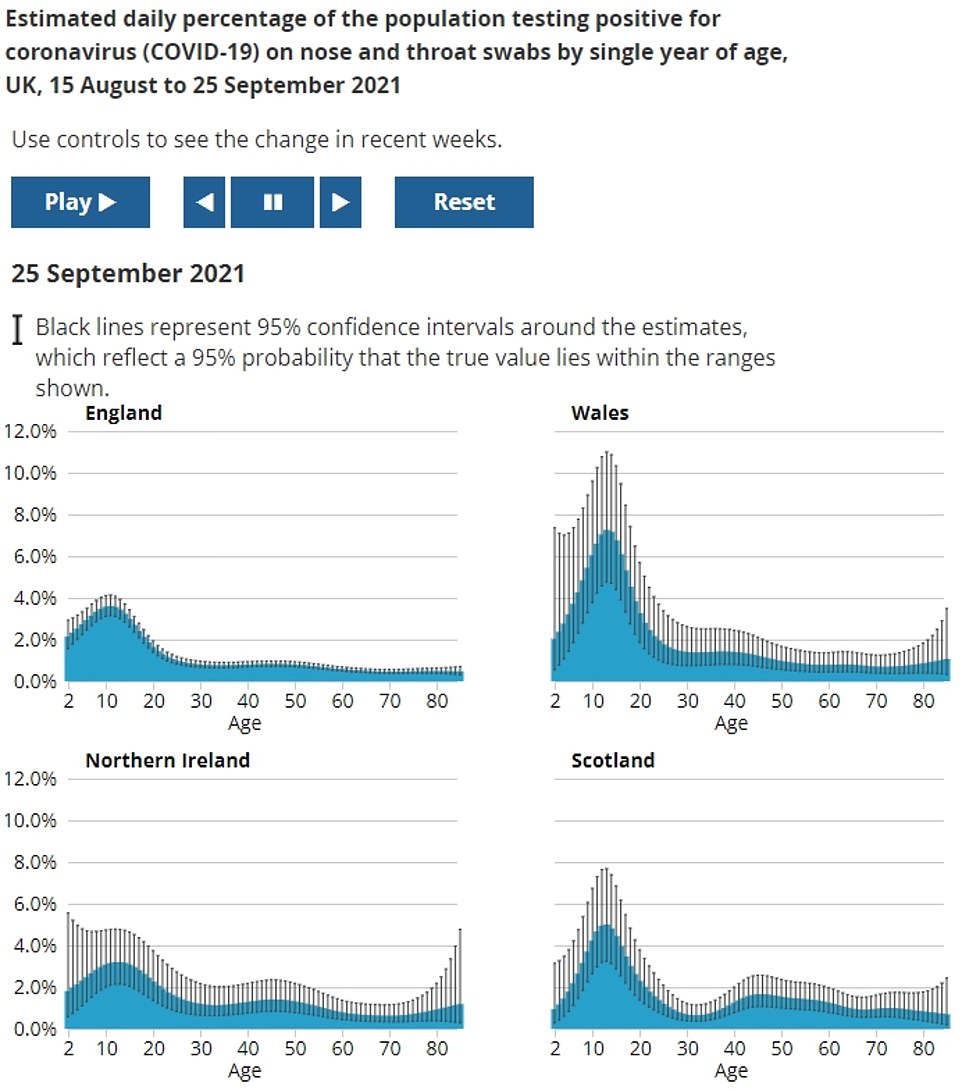 The ONS said the proportion of people who tested positive in England continued to fluctuate across all regions in the week ending September 25.

The percentage of people testing positive increased in the North West, where 1.5 percent of people tested positive, and in Yorkshire and The Humber (1.8 percent).

Cases also showed an upward trend in the East Midlands (1.5 percent) and the Southwest (1.2 percent).

For the other regions – West Midlands, East England and South East – trends were uncertain.

The ONS, which bases its estimates on a random test of a sample of people in the UK, said more than 99 percent of all positive Covid swabs sequenced in the four weeks to August 30 were the Delta variant.

It comes as Department for Health data yesterday revealed that Britain’s Covid outbreak has shrunk for the first time in nearly two weeks, as hospital admissions and deaths continue to fall.

A further 36,480 positive tests were registered in the UK, a decrease of 0.6 percent from the 36,710 infections noted last Thursday. Week-over-week cases had risen steadily over the past 12 days.

Despite the decline in official numbers, it could be an outlier as other surveillance measures today have shown that the number of cases is still rising.

Data from King’s College London yesterday showed that the number of Britons who catch Covid every day rose by nearly 30 percent last week.

Both numbers are several weeks behind infections because of how long it can take infected patients to become seriously ill.

Publican killed himself in jail before police could quiz him over death of webcam girl, inquest told