Nearly one in five parents say they never plan to test their child for the coronavirus, as students return to school after the summer holidays.

An exclusive MailOnline survey conducted by Redfield & Wilton Strategies found that 36 percent of parents of school-age children plan to test their child two or three times a week.

But 17 percent of parents plan to never test their child, and 20 percent plan to test only once a week.

Ministers want all secondary school and college students in England to take two lateral flow tests, three to five days apart, on their return, and then continue testing at home twice a week.

The government hopes mass testing will prevent outbreaks of the coronavirus in schools, but research findings suggest the strategy could be undermined.

Meanwhile, the poll found that a majority of Britons – some 55 per cent – would support pupils to social distancing, fearing that relaxed coronavirus rules could lead to an increase in cases in the new trimester. 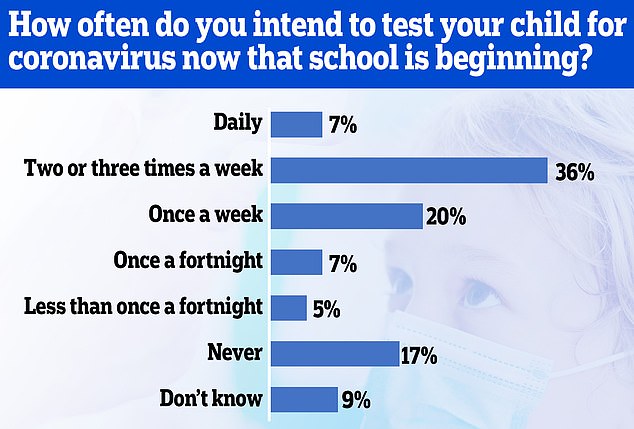 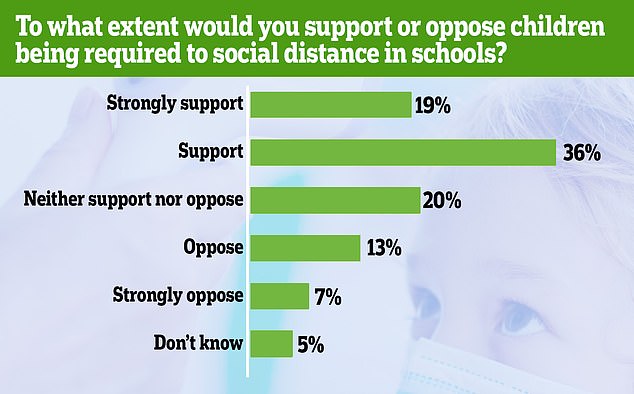 Pupils across England and Wales have started to return to class this week after the summer break, while schools in Northern Ireland are also reopening.

Schools in Scotland returned two weeks ago and the reopening is said to have contributed to a rise in coronavirus cases north of the border.

Education Secretary Gavin Williamson did not rule out a possible increase in infections as a result of schools reopening.

After being asked repeatedly, Mr Williamson told Sky News this morning: ‘This is why we are doing the testing program and we encourage children to participate, parents and of course teachers and support staff. This is one way to eradicate Covid-19.

“We’re trying to find that constant, sensible balance by giving kids as normal a classroom experience as possible, but also recognizing that we’re still dealing with a global pandemic.”

Schools in England no longer have to keep pupils in the ‘bubbles’ of the grade and wearing face coverings is no longer advised.

The poll also found that a majority of Brits would support children to keep their distance at school.

About 55 percent would support the move, while 20 percent said they were against it and 20 percent were in doubt.

A similar majority, some 53 percent, are in favor of making face masks compulsory in schools, while 24 percent are against it.

Cheryl Burke and Cody Rigsby continue Dancing with the Stars…

The bizarre reason Victoria’s Covid numbers were higher than…