Moby, 55, in the studio at his home in Los Angeles

My haven, Moby: American musician, 55, in the studio at his Los Angeles home

By Peter Robertson For Weekend Magazine 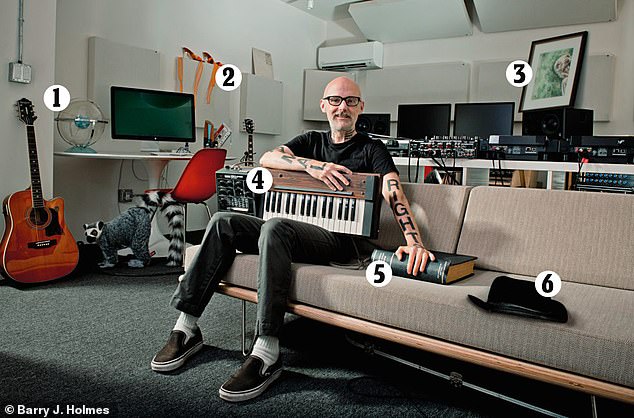 My studio is the place where I am happiest. I grew up very poor, but in the 1970s my mother bought this plastic globe at a thrift store for $1.25 (about 90 pence).

The outside is a map of the stars, with the Earth and Moon inside.

When I was young and obsessed with science fiction, it represented space and the future and was very different from my sad, impoverished home. It’s also just a really cool globe.

When I was ten I started drinking and taking drugs. I used to think it was normal to have 20-25 drinks a night and spend 200 pounds on cocaine every day. My grandfather and my father, who died when I was two, were alcoholics.

Six months before I got sober, in 2008, I had a crazy night out. Looking for a taxi, I saw these orange shoes in a dumpster and they remind me of the madness that accompanied my addiction.

I now see my job as working on behalf of animal rights at the charities and media level. I travel a lot so it’s not feasible for me to have pets, but just before the pandemic started, a friend adopted a puppy.

I fell in love with Bagel and I see her several times a week. I have made peace with the knowledge that I will never marry or have children, and she is my favorite living being. For my birthday, another friend painted this picture of Bagel for me.

Moby became friends with David Bowie (pictured together), after meeting at a party in 1995

Growing up, music and animals gave me a sense of security. With music I could step into other worlds. Originally I thought I would become a philosophy teacher – I did that in university – and make music in my spare time.

I bought this, my first synthesizer, at a thrift store in 1980. I quickly realized it was incredibly limited and put it in storage.

But six years ago I saw an interview with the British band OMD – they said they used the same model on their first few albums, which were brilliant. Now I use it constantly.

5 A WHALE OF A STORY

My mother and I never really talked about my father, even though I was their only child. As a teenager I visited his mother in a retirement home and she gave me this stamp collection of his, so I feel a connection.

My parents called me Richard Melville Hall, nicknamed Moby because I may be distantly related to Herman Melville, who wrote Moby Dick.

As a child I was obsessed with David Bowie. I met him at a party in 1995, and five years later he asked for coffee since he moved across from me in New York.

We became friends. At Christmas 2001 I did a remix for him…for free of course. He said, “Nowadays!” and gave me this – the black hat he wore in The Man Who Fell To Earth. It felt like I had just been given the Holy Grail.

As told to Peter Robertson. Moby’s new album Reprise, featuring all of his hits re-recorded with a full philharmonic orchestra, is now out on Deutsche Grammophon/Decca Records

Sleep expert: The shut-eye tip based on YOUR personality –…

Foodie wows thousands online with her simple recipe for…

AHEAD OF THE GAME: Chelsea could see FIFA Club World Cup moved from Japan due to Covid-19