How did he survive THIS? Man, 26, escapes uninjured after being thrown from his Ford Mustang just before hitting a tree and exploding

A Melbourne driver miraculously escaped after being thrown from his powerful Ford Mustang when it slammed into a tree and exploded into a fireball.

The man, 26, from Point Cook, suffered only minor injuries in Sunday night’s spectacular crash on Geelong Road, near Footscray Cemetery in Yarraville.

But his 2018 black Mustang — which cost up to $130,000 — was left like a molten mass of twisted metal after it burst into flames and burned up in the shocking impact. 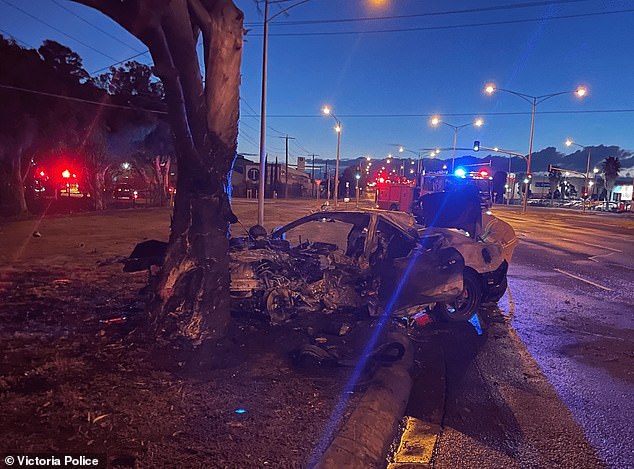 Victoria Police are now investigating whether speed was a factor.

“The driver is lucky that he survived,” said a spokesman.

Just as the car passed the Footscray General Cemetery, the driver is believed to have lost control of the vehicle and hit a priority sign before crashing into a tree.

The male driver was thrown from the car and the Mustang caught fire.

“The 26-year-old man from Point Cook was taken to hospital with non-life-threatening injuries and will be spoken to by police later.”

Tearjerking reunion as boy, 8, finds his Army father hiding in the trunk of car…