A larrikin potato farmer struggling through Victoria’s Covid lockdown has jokingly called for a “Donald Trump-style wall” to keep Melburnians out of his idyllic coastal community.

Residents of the glamorous Mornington Peninsula are tired of having to adhere to the same strict lockdown restrictions as Metropolitan Melbourne, despite being more than 100km away.

The community is calling on the Andrews government to reclassify the popular haven for the rich and famous, dotted with wineries and rich farmland, as a regional area so it can escape the grueling homesteads of the big smoke.

Health authorities lifted lockdown restrictions on regional Victoria last week but did not include the Mornington Peninsula in reopening – despite some areas much closer to the capital being given freedom. 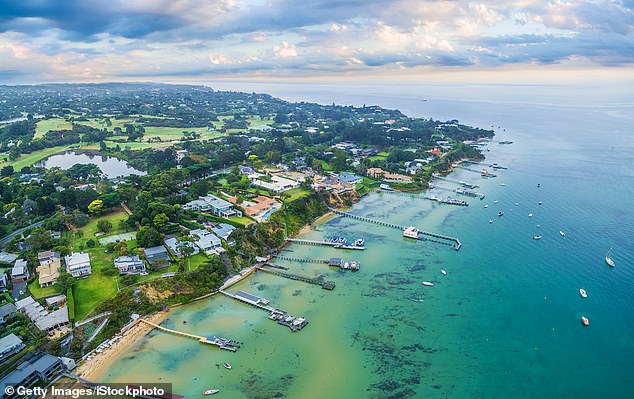 Residents of the glamorous Mornington Peninsula are tired of having to adhere to the same strict lockdown restrictions as Metropolitan Melbourne, despite being more than 100km away (pictured, Sorrento) 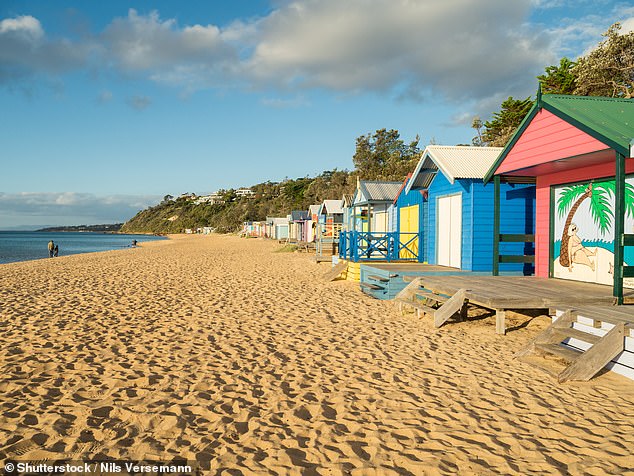 Residents of the popular haven for the rich and famous want to be reclassified as a regional area to escape the homeliness (photo, Mills Beach on the peninsula)

Richard Hawke, a sixth-generation potato who runs Hawke’s Farm Gate, said: ‘We follow the same rules as metropolitan Melbourne, but we’re on a farm,’ he told A. Current affair.

“It defies logic a bit, but I think their reasoning is that they can’t stop people from coming here.

“I wish there was a magic barrier that could stop people from coming down and allow us to open up on the Mornington Peninsula.

“One of Donald Trump’s walls,” he joked.

A nearby winemaker said his once thriving business has been devastated by the closure.

“While we’re grateful for all the support we’ve received, it only represents about 0.8 percent of our spending over the past year,” said Martin Spedding, owner of 10 Minutes by Tractor winery.

“It has to change and recognize what the Mornington Peninsula is… an agricultural and rural area.” 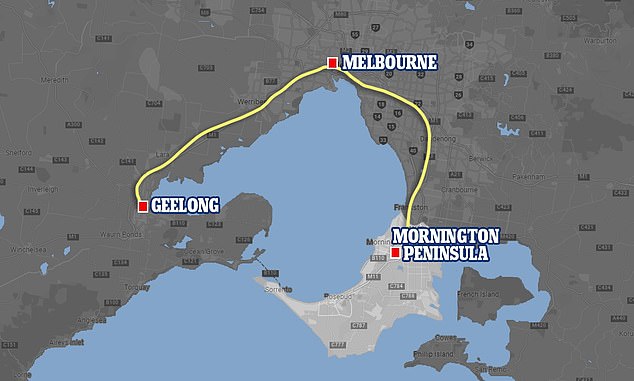 Adding to the community’s frustration, Victoria’s second largest city, Geelong, on the west side of Port Phillip Bay, just 75 km from Melbourne, was classified as regional and reopened. 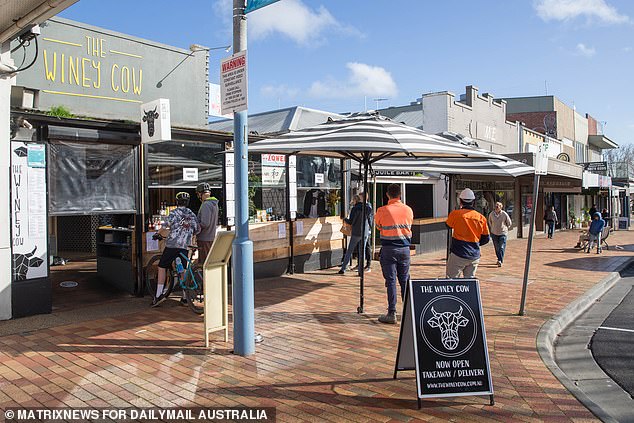 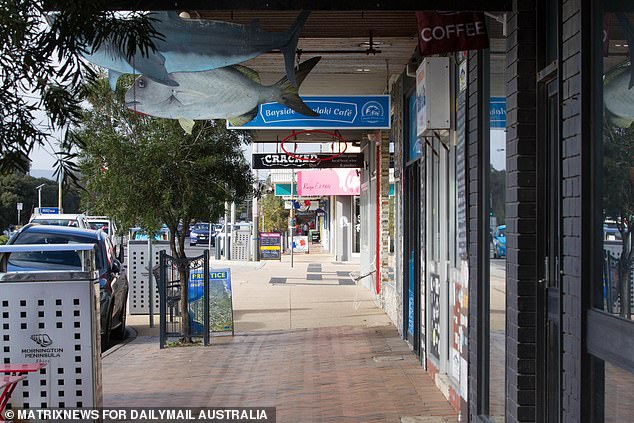 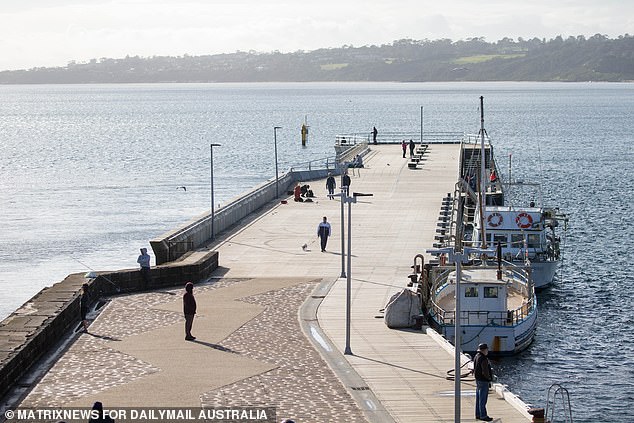 Health authorities lifted lockdown restrictions on regional Victoria last week but have not included the Mornington Peninsula in the reopening (pictured, Mornington Pier)

Adding to the community’s frustration, Victoria’s second largest city, Geelong, on the west side of Port Phillip Bay, just 75 km from Melbourne, was classified as regional and reopened.

“We are an hour and a half from Melbourne and they have opened Geelong which is only an hour away,” said local resident Kelly.

‘We’re going to break down here and people have to work.

“We’re a fair distance from everyone, so we should be able to open.”

Last month, Mornington Peninsula Mayor Despi O’Connor wrote a letter to Prime Minister Daniel Andrews pleading with him for a “more tailored approach to easing restrictions” and noting that the community over the past 10 months had only one Covid case. 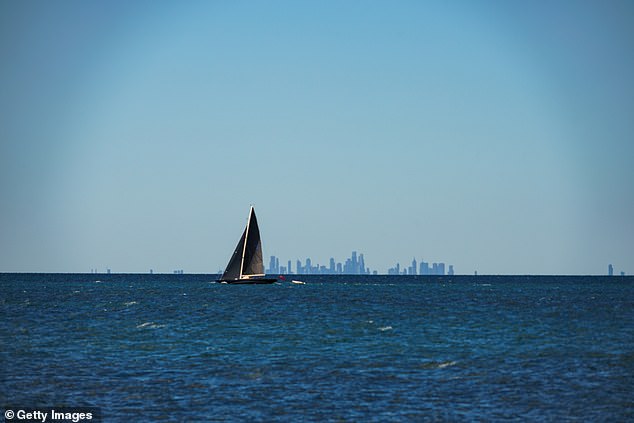 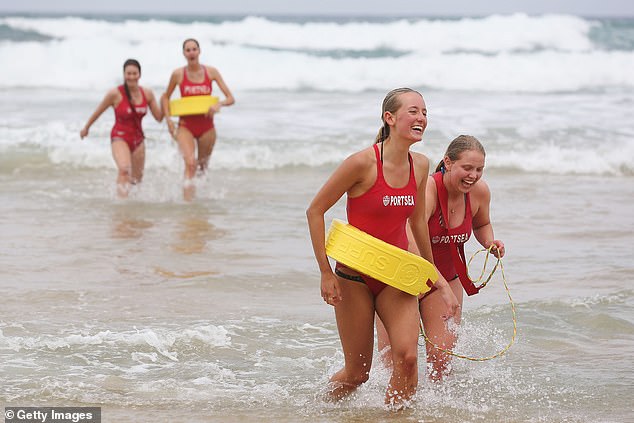 Known for its beaches, the coastal community is dotted with wineries and farmland (photo, Portsea Young Lifesavers)

But in the past 30 days, that figure has now risen to 15 active cases with many local residents blaming outside visitors.

Victoria recorded a further 473 transmissions on Monday as the worrying sign that the Delta outbreak continues to increase.

“We have not heard from the Prime Minister at this time,” Councilor O’Connor said.

“I think the restrictions will depend on where everything is at the time because it’s likely that when we open up, we’re going to have cases and our health care system will have to deal with them.”

“Visitors to this area have been a big problem from the start. We’ve already had visitors here.’ 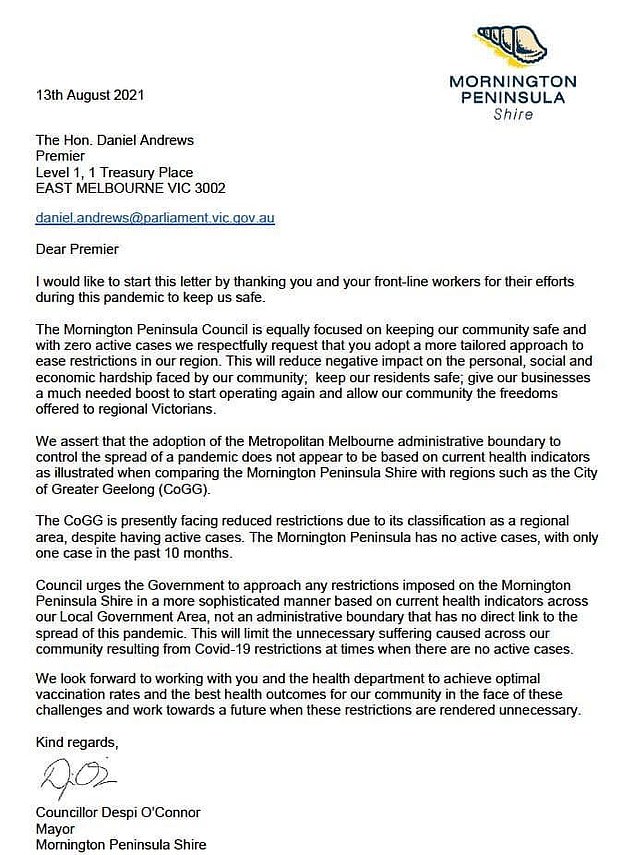 The Mayor of Mornington Peninsula sent this letter to Daniel Andrews last month but has not heard back. There are now 15 active cases in the community

Jeff Bridges, 71, says his cancer is in ‘remission,’ caught COVID-19