A South Carolina town’s newly constructed 9/11 memorial was vandalized on Saturday bearing the word “Taliban,” the 20th anniversary of the attack.

Paul Nichols, founder and CEO of Upstate Granite Solutions — the Greenville, SC company responsible for the granite monument of the Twin Towers — says someone sprayed the name of the fundamentalist organization on both sides of the monument late Saturday night.

“We have devoted the time and money to this memorial to bring our community together and unite in the memory of those who died in the attacks 20 years ago, as well as those first responders who volunteered their lives to serve others, ‘ said Paul’ WSPA.

Upstate Granite Solutions employees were able to remove the damage on Sunday, but company executives are still angry about the incident. 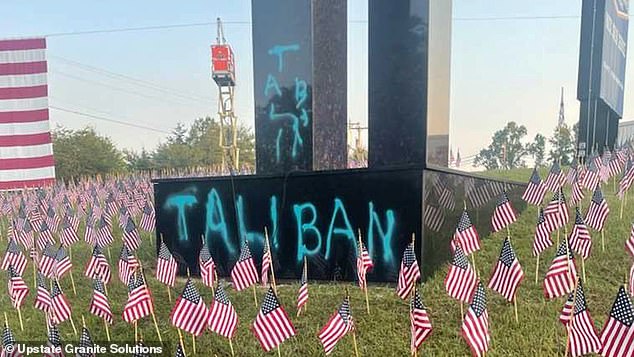 A granite monument of the Twin Towers on display in Greenville, SC was sprayed with the word “Taliban” on the 20th anniversary of the 9/11 attacks 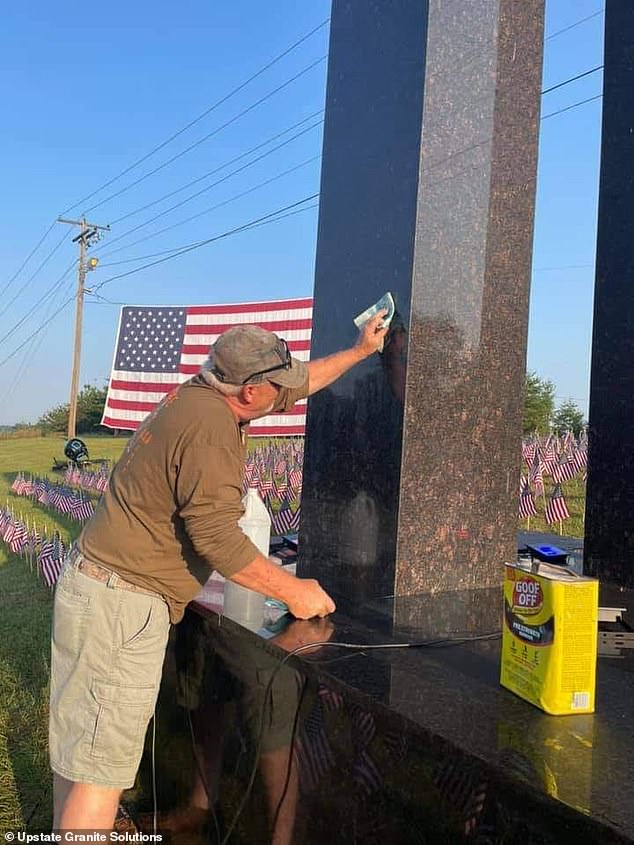 An Upstate Granite Solutions employee, identified on social media as Tim (pictured), helped remove the graffiti from the monument on Sunday morning

“We’re not going to change our stance and our stance, but I think we need to be willing to hear why other people are being hurt by this so we can come together as a community,” Kelly Nichols, who is also affiliated with the company, said. WYFF.

She says the monument was intended to show the Greenville community that “there is still something to believe in in America,” and to show how much the company cares and supports military members and first responders.

“This was not intended to be divisive. This was meant to unite us,” Kelly added.

Upstate Granite Solutions began work on the monument — which features two granite slabs designed to look like the North and South Towers of the World Trade Center — more than a month ago. Independent reported.

Each ‘tower’ weighs about 4,000 pounds and is 13 feet tall. It also includes a beam of light that can be seen from 25 miles away. It is also surrounded by American flags.

Construction was just completed on Wednesday. 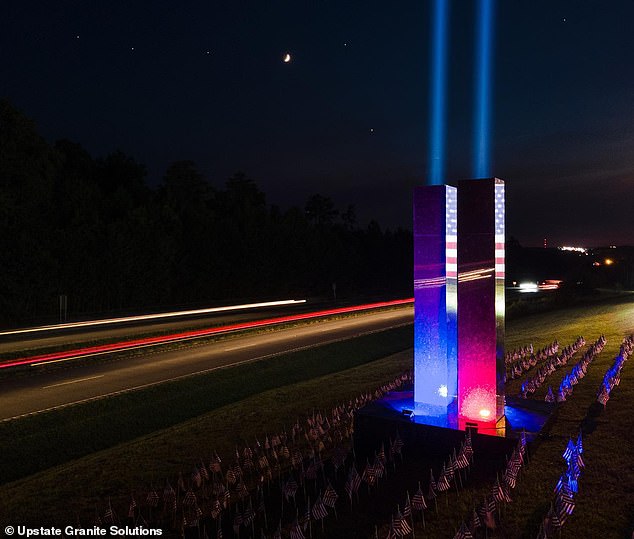 The memorial (pictured) has two granite slabs designed to look like the north and south towers of the World Trade Center. It also includes beams of light that can be seen from 40 miles 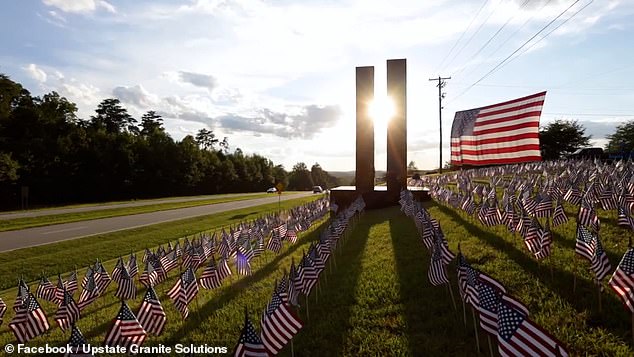 Each “tower” weighs about 4,000 pounds and is 13 feet tall. The monument is surrounded by American flags

The Nichols say they have received a flood of community support following the vandalism.

“I got a message from a community member that the monument had been vandalized,” explains Paul.

“Apparently someone came by on Saturday night and sprayed the base of the monument and one of the towers with spray paint.”

The company has filed a report with the Greenville County Sheriff’s Office, which is now investigating the incident.

“After they completed their report, we were able to remove the spray paint with chemical cleaners,” explains Paul.

‘[It] it takes more than a little paint to destroy our spirit of patriotism.”

The act of vandalism comes less than two weeks after the United States withdrew from the now Taliban-controlled country of Afghanistan.

President Joe Biden faced opposition from Republicans over the decision.

Members of Congress, including Biden’s fellow Democrats and opposition Republicans, have scheduled hearings since the Taliban took control of the country last month after a rapid advance. 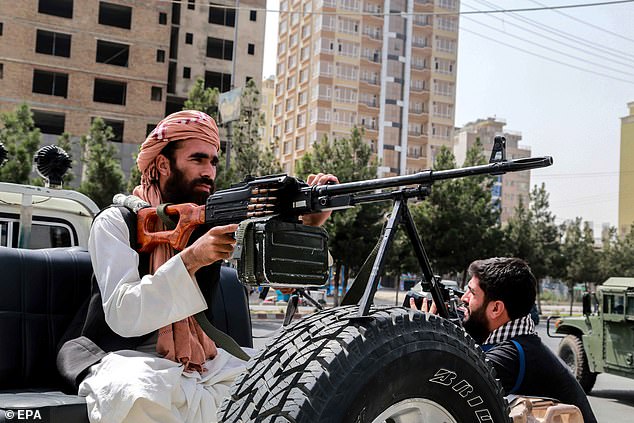 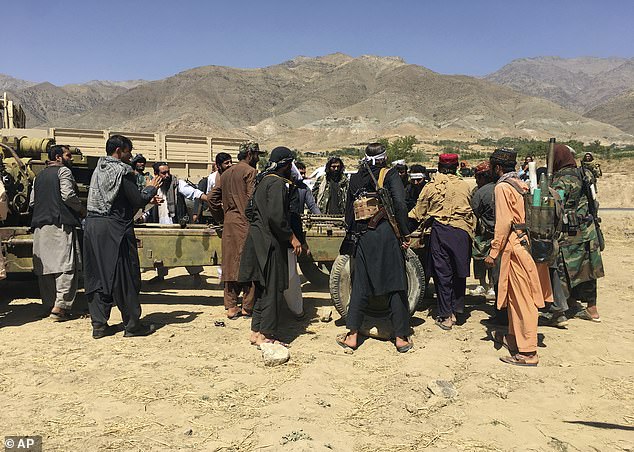 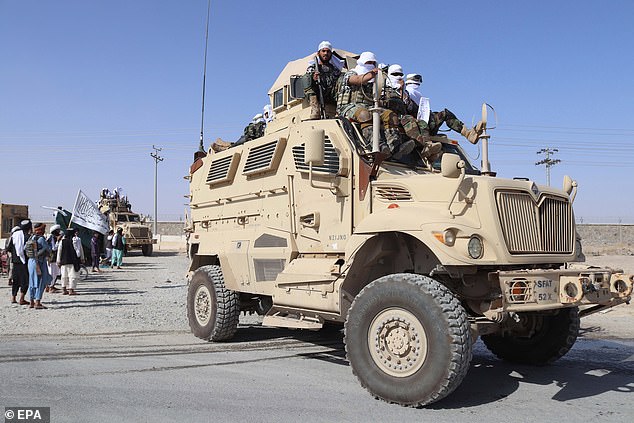 Secretary of State Antony Blinken will testify twice this week on the US withdrawal from Afghanistan, as lawmakers kick off a long series of intense hearings on the chaotic end to America’s longest war.

Lawmakers have prepared a long list of questions for the veteran diplomat about the rapid collapse of the US-backed Afghan government and the Biden administration’s struggle to evacuate more than 142,000 people, including Americans, Afghans at risk and others to flee the Taliban.

Some Republicans have even called on Biden, Vice President Kamala Harris and Blinken to resign.

Meanwhile, Democrats say they wanted the hearings to cover not only Biden’s seven months as president before the capital, Kabul, was taken by the Taliban, but also the entire 20 years of US involvement in Afghanistan — among four presidents from both. parties.

Washington school bans red, white and blue 9/11 tribute because it could be ‘racially insensitive’

‘I look forward to a simpler life’: Member of woke Loudoun School board…