Climate change is often associated with global warming, but an increase in greenhouse gases is leading to colder winters in the US and Europe, according to scientists at the Massachusetts Institute of Technology.

Abnormal warming at the poles creates excess energy that causes the polar vortex phenomenon to weaken and split into smaller ‘sister’ vortices that travel outside the typical arctic range, according to a new study in the journal Science.

A split in a polar vortex can cause both sudden and delayed effects, much of which is associated with falling temperatures and extreme winter weather in the US and northern and western Europe.

The scientists believe a split vortex triggered the February cold snap that killed up to 700 people in Texas and left more than 3.5. million without electricity. 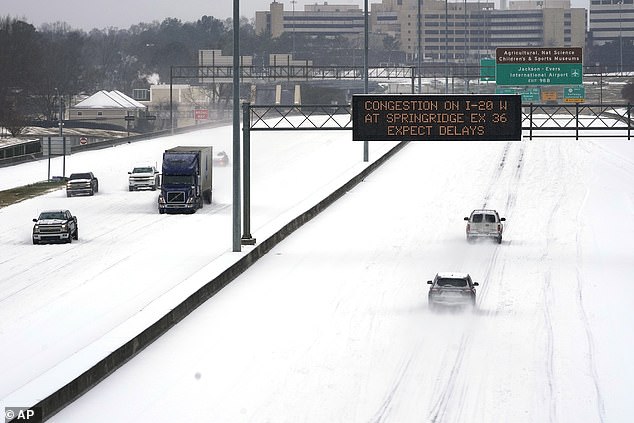 “Despite the rapid warming that is the main feature of global climate change, especially in the Arctic…the United States and other regions of the Northern Hemisphere have historically experienced a striking and increasingly frequent number of episodes of extremely cold winter weather. four decades,” the authors wrote.

“Arctic change is likely a major cause of a chain of processes involving what they call a stratospheric polar vortex disturbance, ultimately resulting in periods of extreme cold in northern latitudes,’ a band made up of 36 countries in North America, Europe, East Asia, and Central Asia.

The number of times the polar vortex has been disrupted and stretched south in any given year has more than doubled since the early 1980s, when satellite observations began. 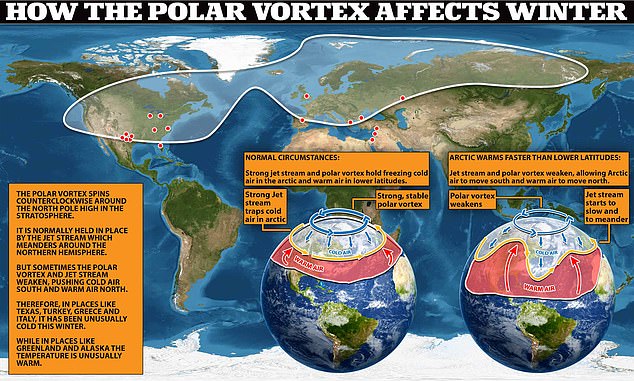 Greenhouse gases heat the ice sheets, which could push the polar vortex out of its usual orbit high in the stratosphere above the North Pole

“And when it’s weakened, it leads to more extreme winter weather, like the Texas cold snap last February.”

WHAT IS THE POLAR VORTEX?

The polar vortex is an atmospheric circulation pattern located high above the poles, in a layer of the atmosphere called the stratosphere.

This structure can weaken due to anomalous warming at the poles, causing it to split into smaller “sister vortices” that can travel beyond their typical range.

The split higher up in the atmosphere could eventually cause a similar phenomenon to “drip” into the troposphere — the layer of the atmosphere closest to the surface, where most of our weather takes place.

A split in the polar vortex can cause both sudden and delayed effects, much of which is associated with falling temperatures and extreme winter weather in the eastern US and northern and western Europe.

That month, temperatures in the US plummeted, reaching as low as -35 degrees Fahrenheit in the Midwest.

More than 212 million Americans were affected by the bitterly cold conditions, CNN reported: in February.

The UK recently had its coldest winter in eight years – on St. Patrick’s Day the thermometer was a chilly 23 Fahrenheit, with snow and icy winds in the south.

The Met Office blames the late freeze on a 2,000-mile-wide “Arctic dome” of cold air blown in from Scandinavia.

The polar vortex normally traps icy air in the Arctic, but warmer air weakens the vortex, allowing it to stretch and wander south.

Cohen says his team’s findings, based on modeling and observations, can be used to predict future extreme winter weather events and better prepare communities.

Co-author Chaim Garfinkel, an atmospheric scientist at the Hebrew University of Jerusalem, said they also help dispel misconceptions about how climate change might affect temperature.

“There has long been an apparent contradiction between warmer temperatures worldwide, but an apparent increase in cold extremes for the United States and northern Eurasia. And this study helps to resolve this contradiction,” Garfinkel told the BBC.

“In the past, these cold extremes over the US and Russia have been used to justify not cutting carbon emissions, but there’s no excuse not to start cutting emissions right away.”

The 5 images that define Biden’s catastrophic Afghanistan exit: Moments that ‘shattered’ his legacy