By Will Kelleher for The Daily Mail

Henry Slade inspired Exeter Chiefs to their first win of the season and lifted them off the bottom of the Premiership table, but his boss was still not quite convinced.

Rob Baxter, Exeter’s rugby director, believes the ups and downs the England center showed during Sale sums up his team’s inconsistent form at the start of the season.

Slade scored two tries and kicked all other points except Will Witty’s try, but Baxter said, “He was like a microcosm of us as a team. 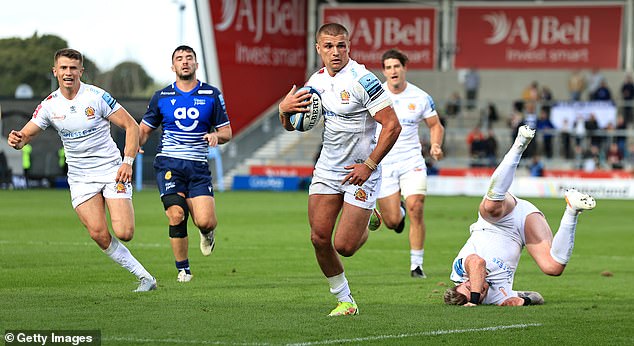 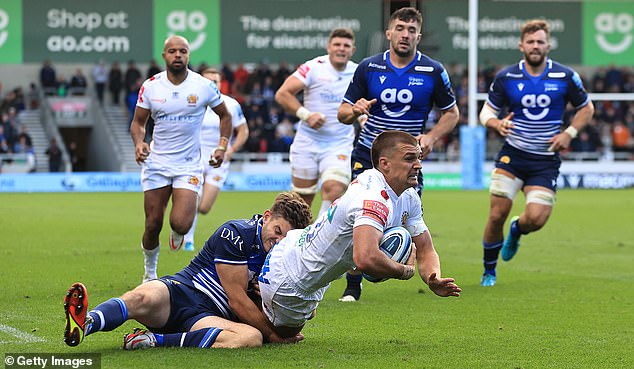 “Some really good stuff, really hard work, really quality play, interspersed with some really bad play – dropping the first kick, throwing a pass to nobody when we have a broken field in front of us, then he kicked off a second.

“Once we’re a little stronger, we’ll be fine and we’ll be able to thrive again.” Exeter often spent Premiership seasons looking over their shoulders at those close behind them, but after defeats to Leicester and Northampton, they needed a win to get them started as they haven’t been four times in a row since January 2015. had lost.

They couldn’t have started worse by dropping the kick-off and then going down 10-0 after a close-range effort from Ross Harrison and a wind-assisted penalty from Rob du Preez in the 11th minute. 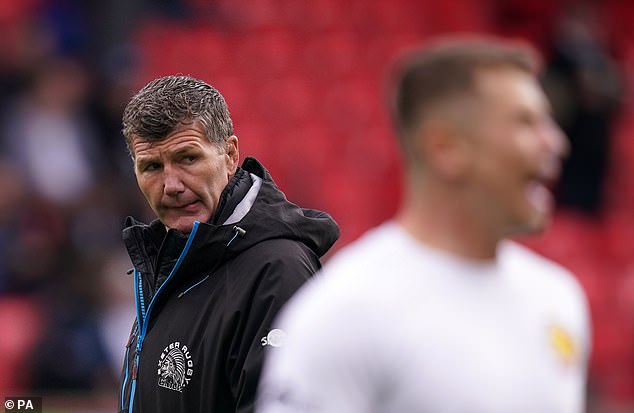 But then, inspired by Stuart Hogg and Slade, they clawed their way back. Slade was awarded a penalty, benched for the first time in four years with Joe Simmonds, then scored after some good work from Hogg.

The Scotsman accelerated excellently into a gap and jumped up to Slade when he was knocked down for a run-in attempt. Slade converted on the halftime whistle, then with the storm behind him, he kicked a penalty three minutes after restart to give Exeter the first lead.

The Chiefs’ case was then greatly helped by a red card for Rohan Janse van Rensburg. His tackle on Harvey Skinner was high, hitting the No. 10 on the chin with no restraint, so he had to go with 26 minutes left of the game. After failing his assessment of his head injury, Skinner did not return. 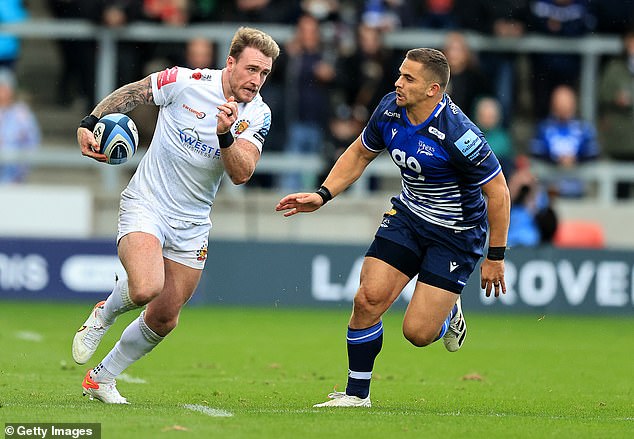 With Van Rensburg out, there was more room for Exeter, and Slade found it right away, scoring his second try by drawing Marland Yarde with a cute dummy and sliding in. He missed the kick, but it didn’t matter, as Exeter quickly scored again.

A Du Preez chip was charged by slot Witty, who grounded him twice, trudged to the ball which dribbled to the Sharks’ goal line, picked it up beautifully and scored. Slade converted, but there was still time for nerves, as Ewan Ashman hopped down the wing to score from the left.

Sale coach Alex Sanderson, who had seen his side win, draw and then lose in the first three, was left scratching his head. “I thought we had a clear plan,” he said. “We can’t run it unless the boys think they know better. That’s a concern. I’m devastated because we’re better than that.”