Derek Chauvin and three other fired Minneapolis police officers have pleaded not guilty at their arraignment on federal civil rights charges in the death of George Floyd.

Chauvin, 45, Tou Thao, 35, J Alexander Kueng, 27, and Thomas Lane, 38, were arraigned Tuesday on charges of willfully violating Floyd’s civil rights while working as government officials when the black man was pinned down by his neck under Chauvin’s knee for more than nine minutes until he passed out and died back in May 2020.

The convicted killer and the three other cops were all slapped with federal charges in May of depriving Floyd of his civil rights by failing to provide him with medical care.

If convicted, all four disgraced officers could face the federal death penalty or life in prison.

The federal charges are separate to the state charges against the four cops who were all fired from Minneapolis Police Department the day after Floyd’s murder.

Chauvin was convicted of Floyd’s second and third-degree murder and second-degree manslaughter at a state trial in Minneapolis in April. He was sentenced to 22 and a half years in prison.

Thao, Kueng and Lane are awaiting a state trial in March on charges of aiding and abetting second-degree murder and manslaughter. They have all pleaded not guilty. 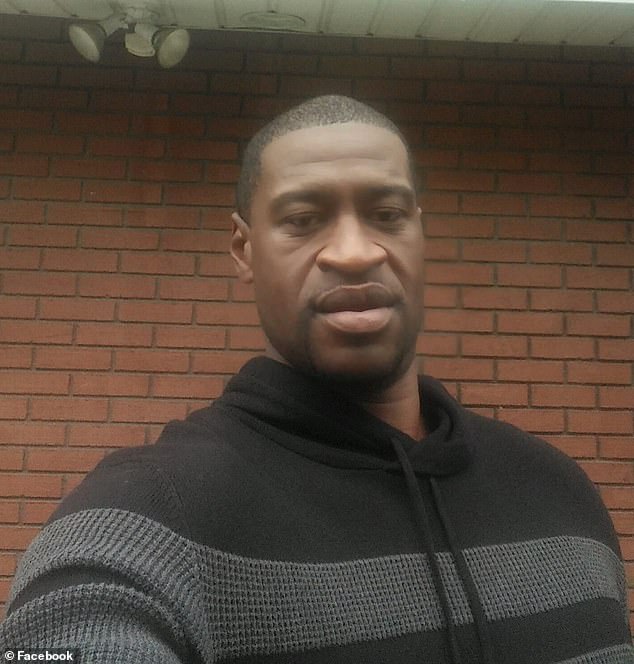 All four former cops entered not guilty pleas at Tuesday’s hearing and waived their rights to have the charges read out to them in court.

It is usual for defendants to enter not guilty pleas at federal arraignment hearings.

The four defendants each appeared via videoconference due to the COVID-19 pandemic.

Chauvin was asked to mute his microphone at one point due to background noise from Minnesota’s maximum security prison Oak Park Heights where he appeared remotely via videolink.

The other three defendants appeared remotely alongside their attorneys.

The judge asked the prosecution and the defense about the number of experts they expect to present to the court at trial.

The prosecution said they will present testimony from medical experts and use of force experts but they were unsure about the number of experts at this time.

The attorneys for the defendants each said they would also call medical and use of force experts.

Around 40 pretrial motions were also argued during the hearing.

Thao, Kueng and Lane have asked that they stand trial separately to Chauvin, claiming they would be unfairly prejudiced if they went to trial alongside the convicted murderer.

Attorneys for Kueng and Thao filed a motion in August, saying evidence against Chauvin would confuse the jury and deprive them of their right to a fair trial.

Lane’s attorney then filed a motion asking to join their request.

Prosecutors are arguing they should all be tried together because the charges stem from the same event and the evidence is similar.

US Magistrate Judge Tony Leung did not reach a decision on this motion Tuesday, instead hearing arguments on both sides and asked each of the defendants to submit additional evidence after the hearing.

Thao’s attorney argued Tuesday that there would be ‘grave prejudice’ against his client if he stands trial with Chauvin.

He argued that Thao should also be separated from Lane and Kueng because the legal teams for those two co-defendants are arguing they were rookie cops whereas Thao was more experienced.

Prosecutors pointed out that Thao had only asked for severance from Chauvin. 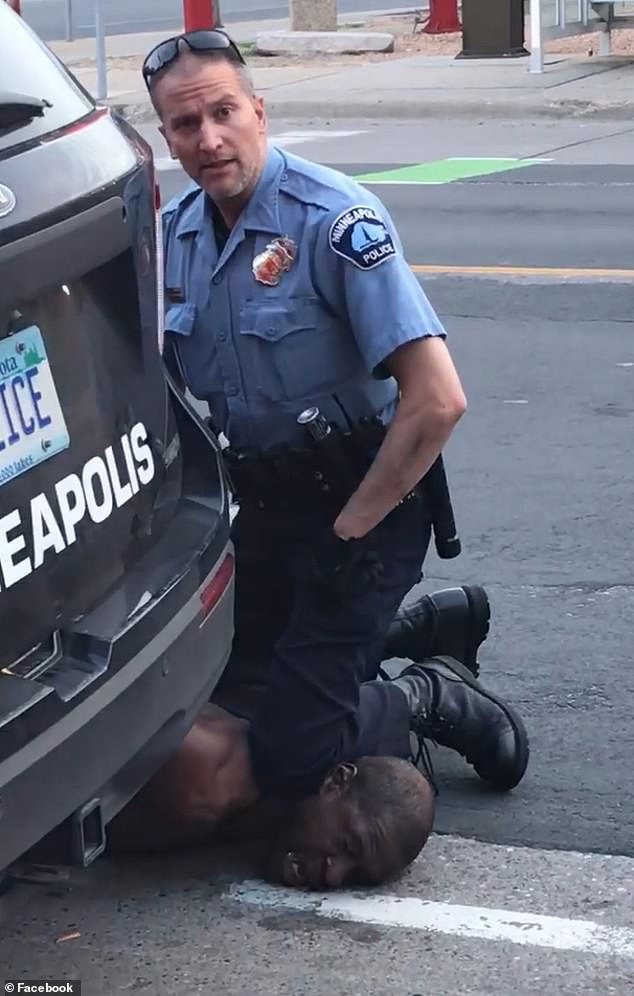 Kueng and Lane’s legal teams also argued there would be ‘substantial prejudice’ if their clients are tried together with Chauvin as jurors already know Chauvin has been convicted of murder for the same incident so will be unable to separate that from their clients.

The prosecution argued that the high-profile nature of the case means jurors will be aware of Chauvin’s conviction over the incident whether or not he is present in court with them.

Prosecutors also said it will be clear to the jury ‘this is not a murder case’ but is a case about civil rights’ violations.

The court also heard arguments on another motion where attorneys for Lane and Kueng sought to strike some of the language from the indictment arguing it will mislead the jury about the extent of their experience as cops.

Lane’s attorney Earl Gray argued over the wording which said he had been a cop since December 2019.

Instead, he said Lane had only worked four shifts on the job as a cop prior to the day of Floyd’s murder – May 25 2020.

‘The main issue in this case for Mr. Lane and I believe for Mr. Kueng also is that they’re claiming he should have intervened on what Chauvin did in this case and the uniqueness of that is that Mr. Lane had four shifts as a police officer,’ he said.

‘The indictment said he started working as a Minneapolis police officer in December 2019,’ he said, arguing they were still new recruits.

Gray said the language is ‘very prejudicial’, ‘not correct and not necessary for the indictment’ as the ‘issue in the case is intervention’. 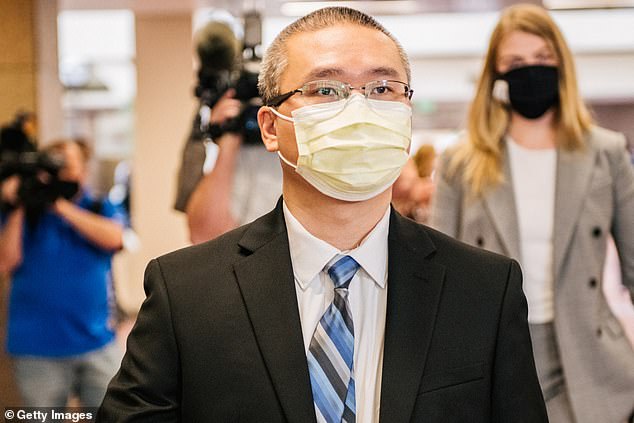 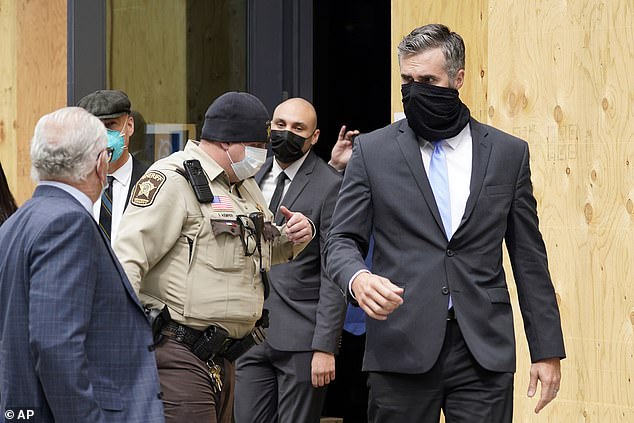 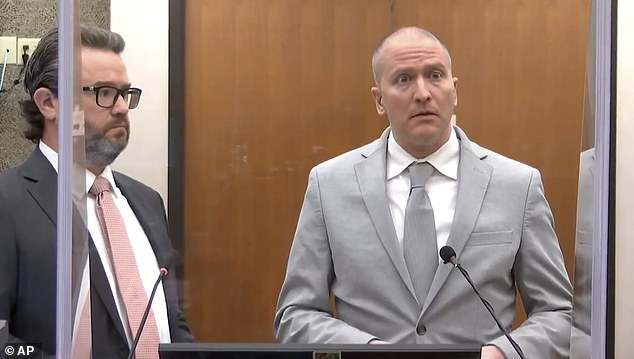 ‘Common law dictates that an officer with four days in the job would be less apt to intervene,’ he said.

Kueng’s attorney Tom Plunkett also told the judge his client had worked only three days, one of which he said was on the desk.

Prosecutors argued that the dates had come from Minneapolis Police Department records which showed that all four defendants were police officers from December 10 2019.

They said it was factual and that Lane and Kueng had been designated recruits from August 2019 but were then sworn in as police officers in December 2019.

Plunkett countered that, while they had taken their oaths as police officers, they were still only officers in a ‘technical sense’ because they had worked less than five shifts without a trainer’s supervision.

For this motion, the judge again asked the parties to submit more information after the hearing.

The federal indictment, unsealed in May, contained three counts relating to Floyd’s death – one charging all four cops, one charging Thao and Kueng and the third charging only Chauvin. 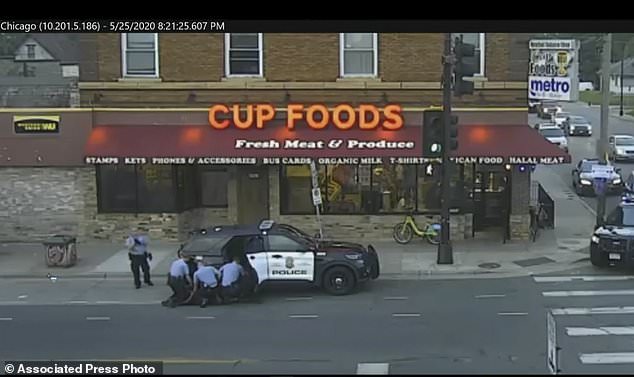 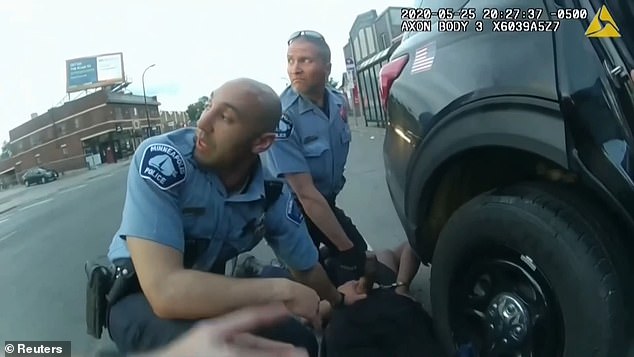 ‘Count One of the indictment alleges that on May 25, 2020, Chauvin held his left knee across Mr. Floyd’s neck, and his right knee on Floyd’s back and arm, as George Floyd lay on the ground, handcuffed and unresisting, and kept his knees on Mr. Floyd’s neck and body even after Mr. Floyd became unresponsive,’ the indictment reads.

This violated Floyd’s constitutional right to be free from the use of unreasonable force by a police officer and resulted in Floyd’s injury and death, says the indictment.

The second count charges Thao and Kueng for failing to intervene to stop Chauvin’s use of unreasonable force.

The indictment says the two officers were ‘aware’ Chauvin was holding his knee on Floyd’s neck and continued to hold it there after he became unresponsive.

‘This offense resulted in bodily injury to, and the death of, George Floyd,’ it reads.

The third count alleges all four cops saw Floyd lying on the ground in clear need of medical care and failed to aid him.

‘By doing so, all four defendants willfully deprived Mr. Floyd of his constitutional right not to be deprived of liberty without due process of law, which includes an arrestee’s right to be free from a police officer’s deliberate indifference to his serious medical need,’ according to the indictment. 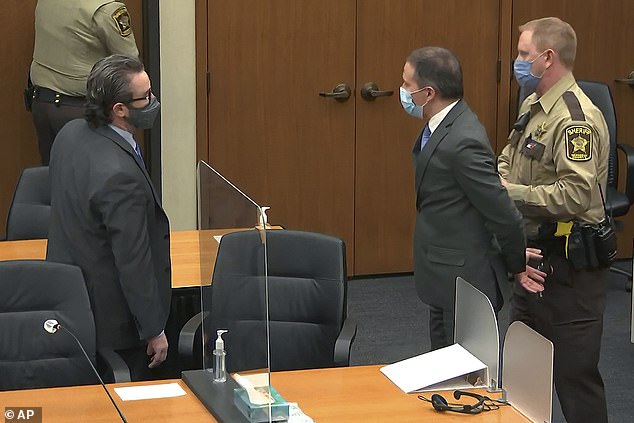 ‘This offense resulted in bodily injury to, and the death of, Mr. Floyd.’

Each of the three counts in this indictment fall under the federal civil rights statute ‘Deprivation of Rights Under Color of Law.’

Under this statute, if the crime results in death – which the indictment says each count did – punishment includes being ‘fined under this title, or imprisoned for any term of years or for life, or both, or may be sentenced to death’, the FBI website states.

Floyd, 46, died Memorial Day 2020 after Chauvin knelt on his neck for more than nine minutes.

Floyd, who was handcuffed, was heard repeatedly saying he couldn’t breathe and calling out for his mom before he lost consciousness.

Kueng and Lane helped restrain Floyd, with Kueng kneeling on his back and Lane holding down Floyd’s legs, according to evidence in state court.

Thao held back bystanders and stopped them from intervening during the deadly arrest.

Chauvin was also charged in a second federal indictment, also unsealed in May, over a 2017 incident where he knelt on a black 14-year-old boy’s neck for nearly 17 minutes and allegedly repeatedly hit him over the head with a flashlight.

Chauvin is charged with two counts over this incident.

The first count alleges Chauvin held the boy by the throat and struck him multiple times in the head with a dangerous weapon – a flashlight – causing him injury.

The second count charges that Chauvin held his knee on the neck and the upper back of the teen even after the 14-year-old was lying prone, handcuffed, and unresisting, also causing him bodily injury.

On each of these charges, Chauvin faces up to 10 years in prison and/or a fine.

This is the first time the convicted killer has ever faced charges over this incident. The 14 year-old involved in that incident has not been named.

The federal civil rights charges – akin to hate crimes – are separate to the state’s charges which led to Chauvin’s trial and murder conviction and which the other three stand trial on in March.

Bystander footage of Floyd’s arrest and death sent shockwaves around the world and sparked protests nationwide demanding an end to police brutality and systematic racism.

‘Yes, I am the winner!’ Kate Winslet jubilant as she…

Canberra takes a swing at the government over vaccine supply after…