A couple have revealed how they saved time and money by not telling their guests about their wedding until the minute they arrived at the church.

Jessica Attwood, 26, a domestic abuse caseworker, and and husband Adam, 29, from Widnes, Cheshire, invited their 70 guests to a christening for one-year-old daughter Lucia.

But really they were secretly planning their big day for the same time, and only their parents and bridal party knew ahead of the day on 24 July 2021, with everyone else finding out when they arrived at the church.

‘It was truly magical and just the ‘us’ way of doing things. We wouldn’t change a single thing,’ Jessica said.

She met Adam, who works as a production group leader at Jaguar Land Rover, in the summer of 2018 and they officially became a couple in February 2019. 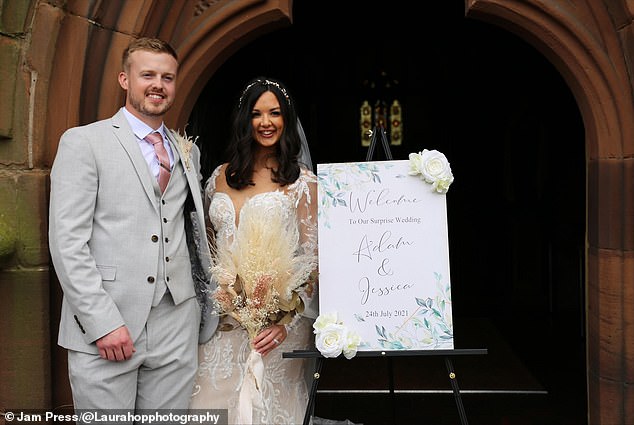 The couple on their big day, standing next to a sign telling people that they have just arrived at their ‘surprise wedding’ 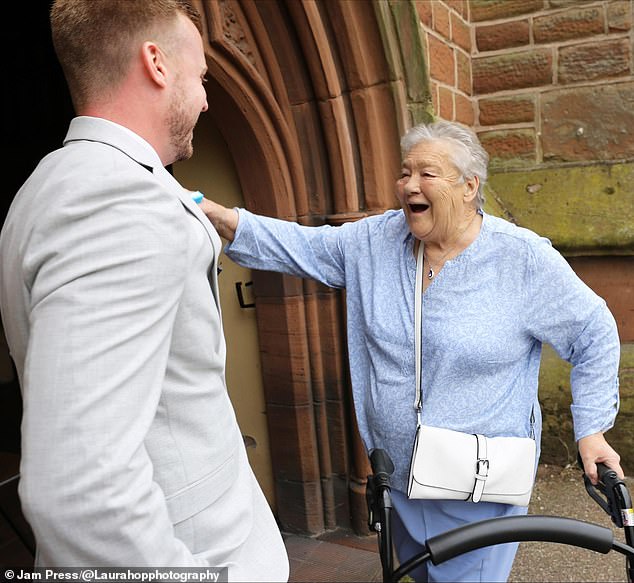 Adam is greeted joyfully by a wedding guest, after people started arriving at the do and realising that it was not just a christening, but the couple’s wedding day 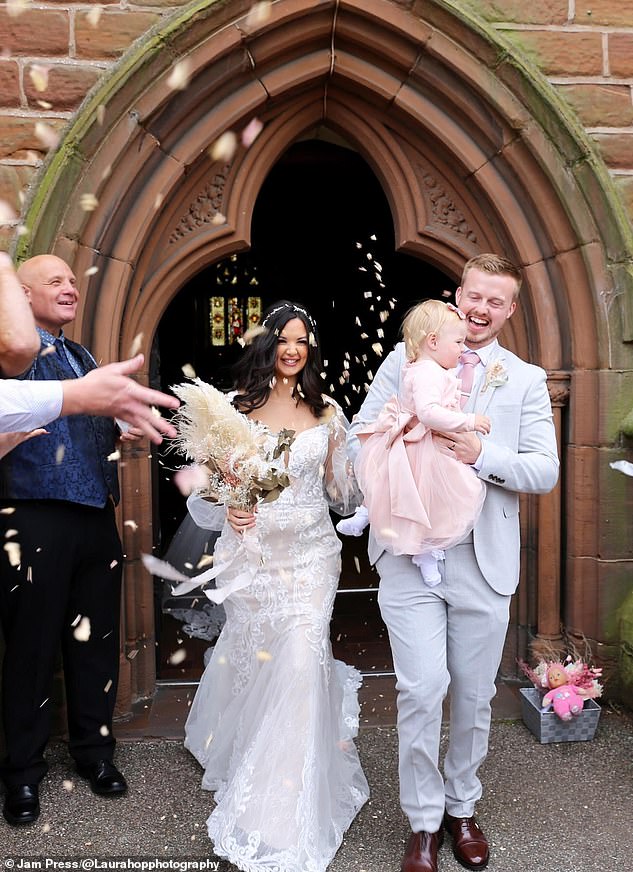 Jessica and Adam Attwood said they’d had a ‘pretty awful time’ after their daughter Lucia Jade was born during lockdown, so their wedding would be a ‘lovely surprise’ for friends and family 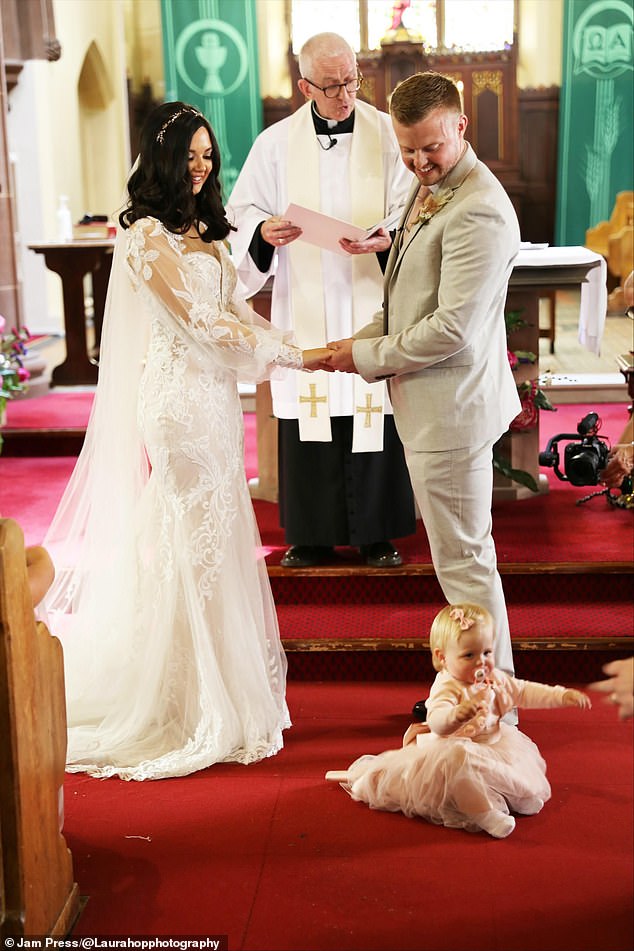 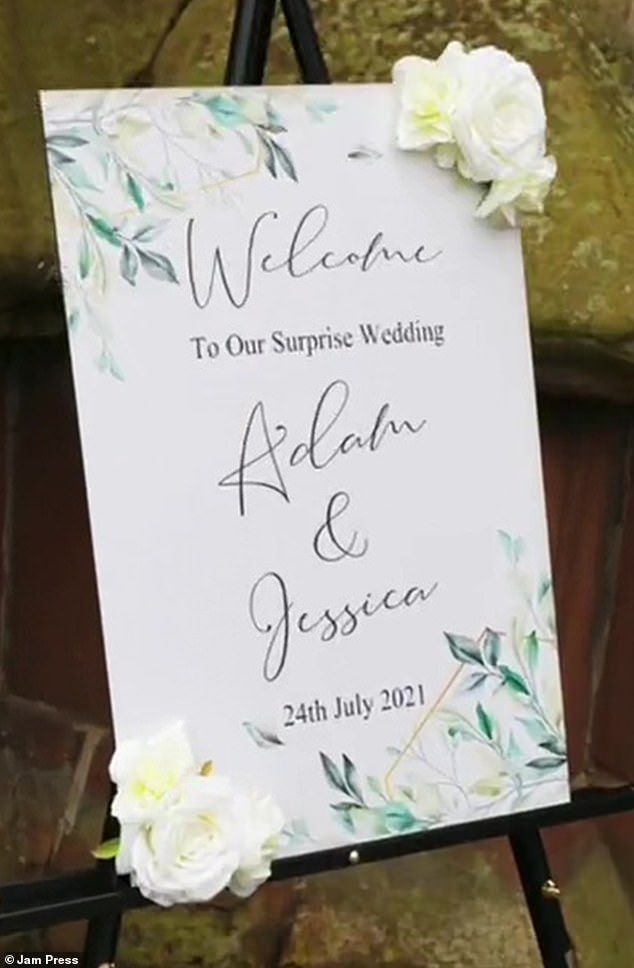 Their relationship moved fast, as Jessica was pregnant with their first child by the end of their first year together.

Lucia Jade, also known as LJ, was born in April 2020 at the height of lockdown. As restrictions eased, they started to plan her christening – and came up with the idea for a double celebration.

Jessica said: ‘We were booking our daughter’s christening and actually joked about getting married on the same day. We looked at each other and just knew it’s what we were going to do.

‘We’ve had a pretty awful 18 months with Lucia being a lockdown baby and not being able to see friends and family that much.

‘We just thought it would be a lovely surprise for everyone to lift people’s spirits.

‘It was also Adam’s dad’s 60th birthday so wanted him to have a special day to remember. We basically killed three birds with one stone.’ 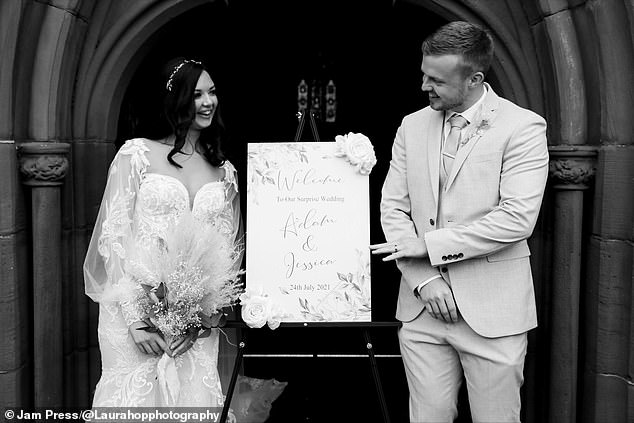 Jessica, 26, and Adam, 29, show off a sign revealing that daughter Lucia’s christening is actually a double ceremony – with them tying the knot at the same time 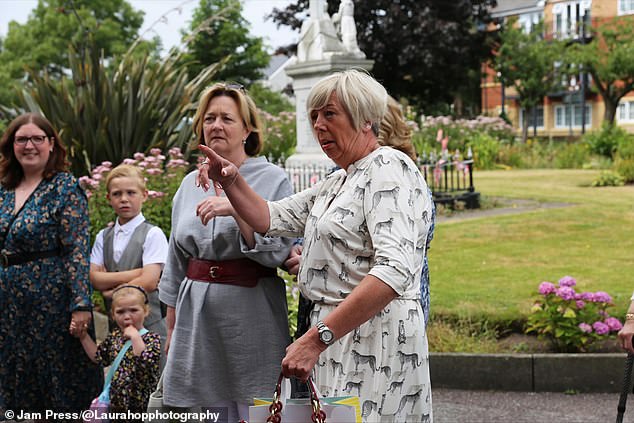 Surprised family members and friends at the event. Only the couple’s parents and bridal party really knew what was planned for the day 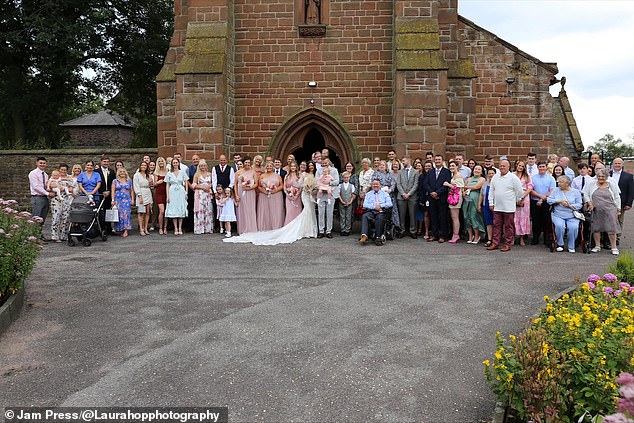 The happy couple, bridal party, and guests congregate outside the church after the ceremony to take a crowd shot commemorating the big day

They spent three weeks booking everything they needed and had their plans in order before Adam had even actually proposed, as Jessica told him she didn’t need a ring – but he still wanted to surprise her.

On 5 April, the family headed off for a day out in the Lake District, where Adam got down on one knee.

Jessica said: ‘I stressed to him it wasn’t about a fancy wedding or ring. That I just wanted us to be married because I love him and our family.

‘Adam had originally planned to propose a couple of weeks later on my birthday but he felt like a spontaneous day was the right time to do it.

‘We were taking pictures with our daughter and Adam had set a timer on his phone when taking the picture and had it record the whole proposal. I genuinely had no idea.’

Although the engagement meant everyone knew they intended to marry someday, the only people who knew the real plan were their parents and the bridal party to ensure they could get everyone sorted with dresses and suits for the day.

Jessica said: ‘When we spoke to the priest about what we wanted to do he was really excited.

‘However, he said to take the church seriously we needed to declare to people we were getting married, so we told a handful of people who were there to help keep us sane throughout the whole process of planning a surprise wedding.

‘We had to tell our parents and the bridal party. I had my two best friends and Adam’s sister as bridesmaids. They helped keep the plan together and was a massive help.’

Despite having the massive secret, Adam and Jessica felt it made the whole process easier as there was very little interference from anyone. 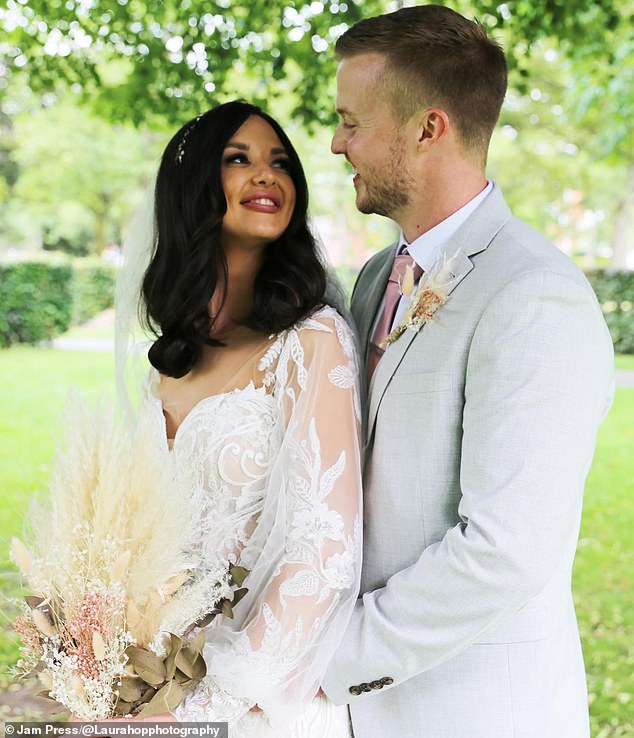 Jessica and Adam Attwood gaze lovingly at each other, following their surprise wedding ceremony on July 24 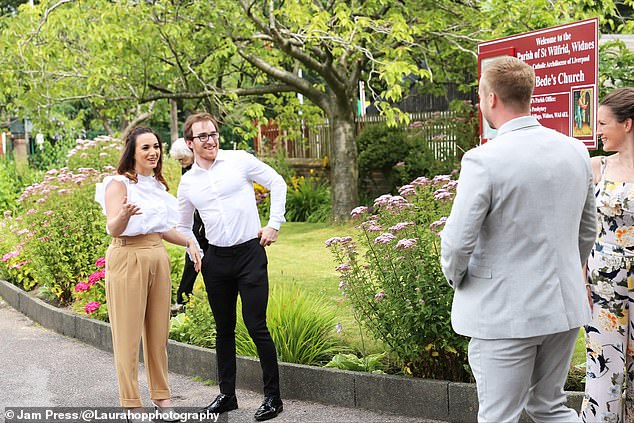 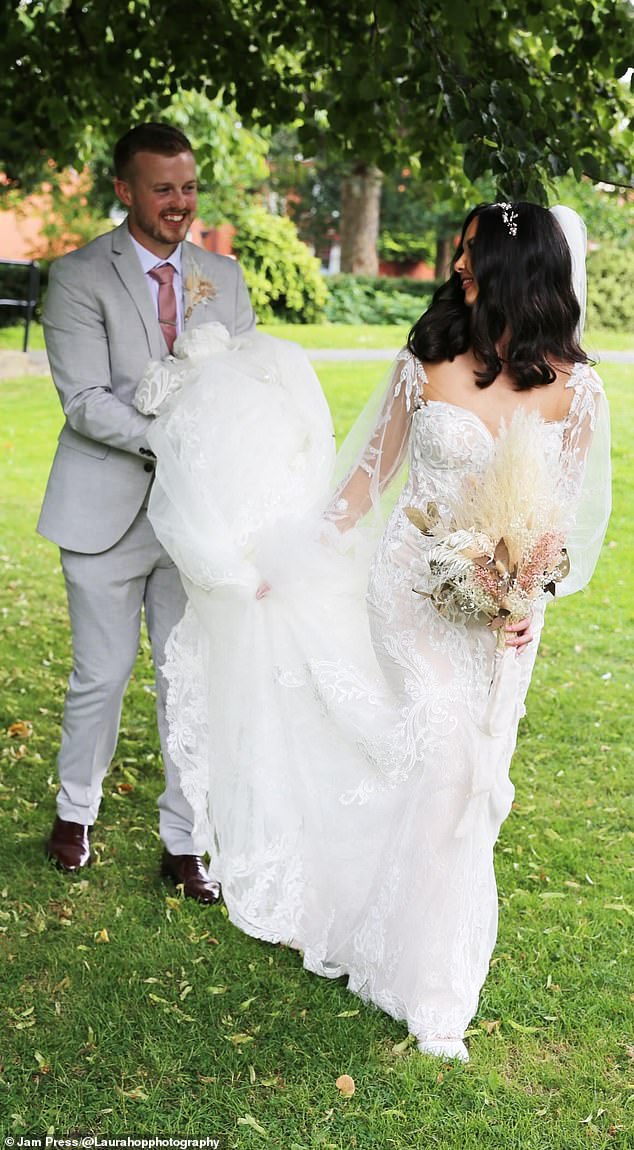 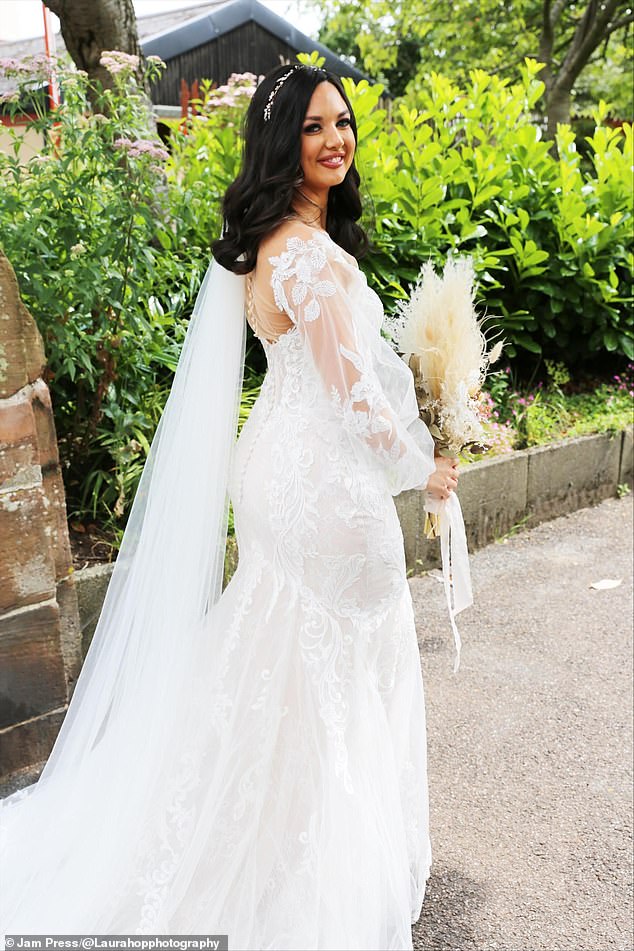 The most expensive item at the wedding was Jessica’s dress, costing £3,500 from Knutsford Wedding gallery. She said she wanted to have her ‘dream dress’

She said: ‘We didn’t feel the pressure from people. Everything was on our terms.

‘We knew it was going to be the best surprise ever, so we held onto that feeling to make sure we didn’t slip up.

‘Don’t get me wrong – I wanted to scream to the roof tops about it all. I post a lot of my life on social media and that was the hardest thing I have ever done.’

It also saved them money as they were able to plan the whole thing for just under £10,000 – well below the average cost of £27,161, according to Hitched. 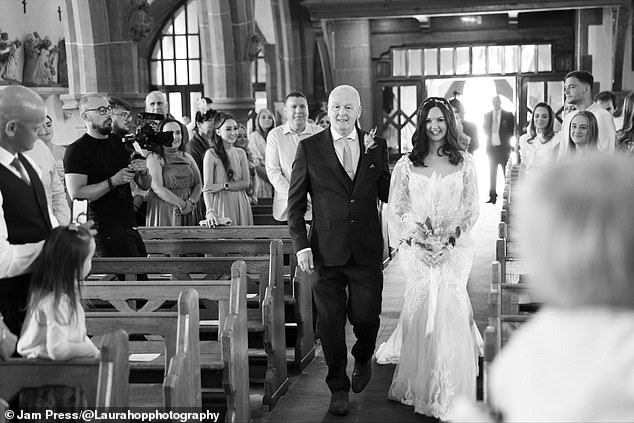 The couple’s parents were some of the small group of people in on the secret, after the priest told the pair they needed some support throughout the planning process 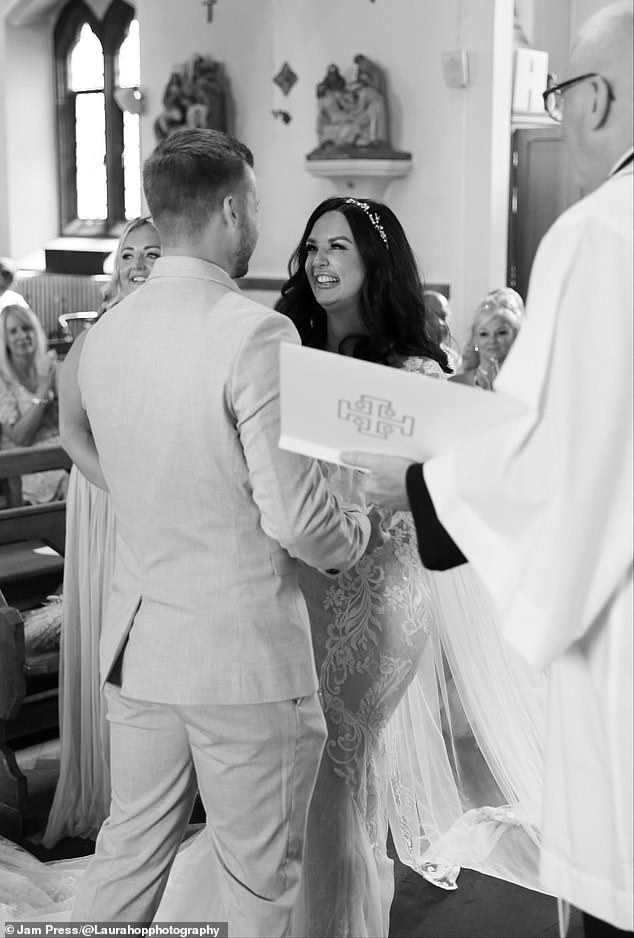 Jessica said: ‘It wasn’t about spending money. We had the bare minimum but had the most magical day.

‘We had two buffets – one when guests arrived straight after the ceremony and then one later in the evening with sausage and bacon barms to soak up the alcohol. That cut costs down dramatically.

‘We had a venue dresser but we pretty much had the minimal decor – chair covers, bows, tables runners, and little centre pieces with Polaroid pictures of me and Adam from when we met.

‘I think the little things just add up over time, like wedding favours. We cut all of that out. We decided to do it as a wedding as well as a christening because we realised how expensive a christening would be.

‘To just spend a bit of extra money on getting married made sense to us!’ 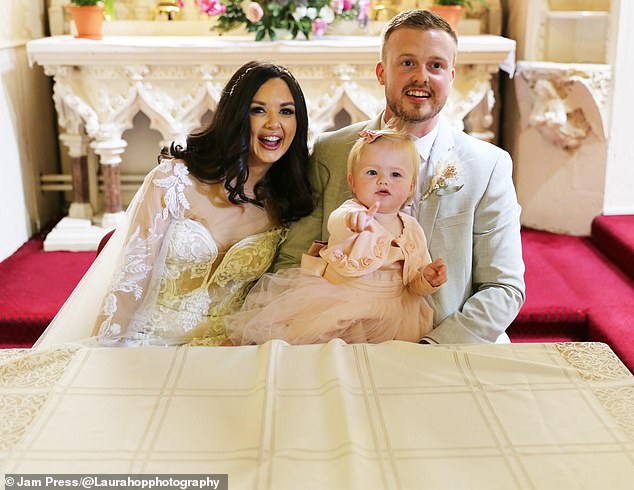 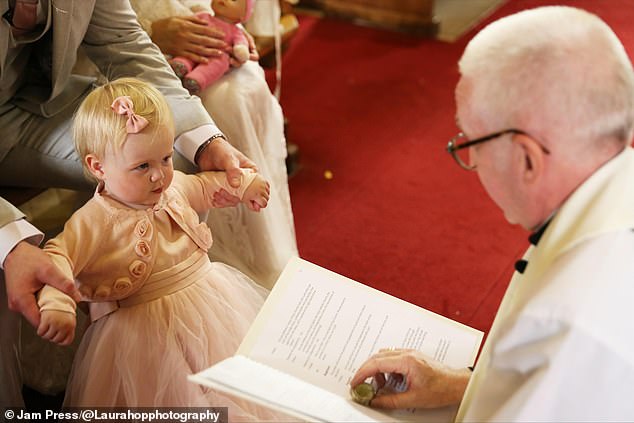 Speaking about the double ceremony, Jessica said: ‘We knew it was going to be the best surprise ever, so we held onto that feeling to make sure we didn’t slip up’ 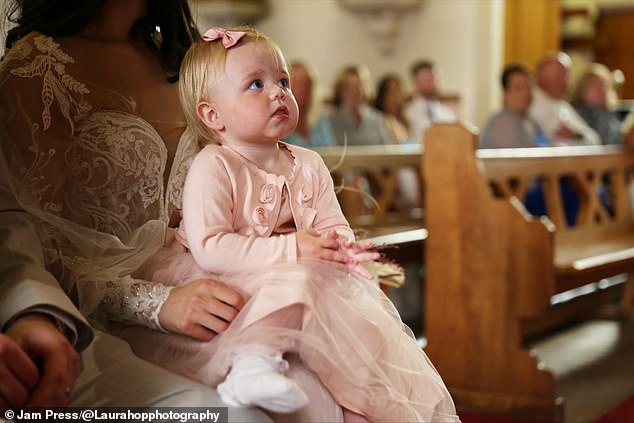 Combining the christening with the wedding allowed the pair to save some pennies, with the bill coming in at £10,000 – a third of the average wedding cost of  £27,161, according to Hitched 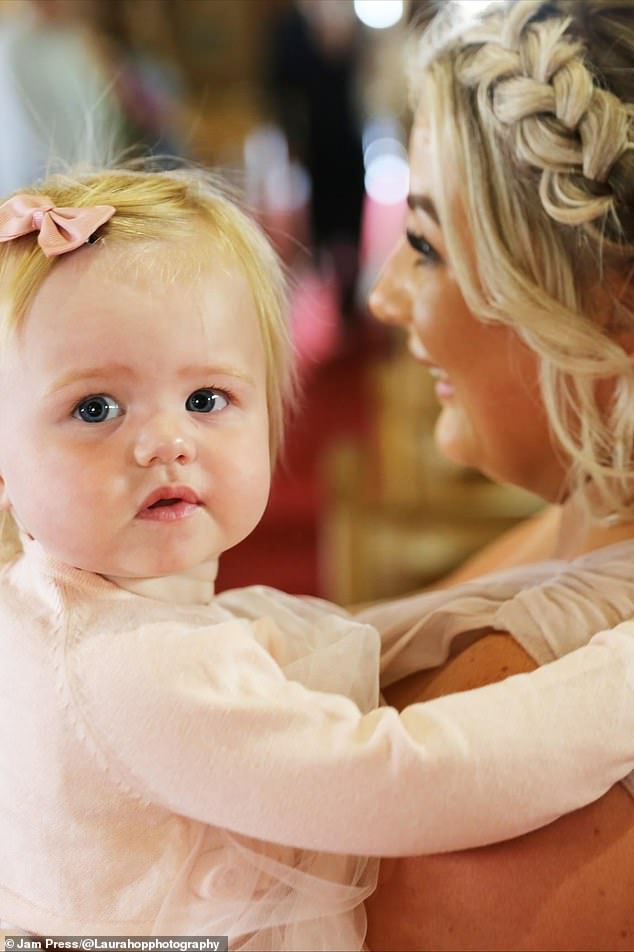 ‘We had the bare minimum but had the most magical day’, said Jessica, who added that their wedding was ‘not about spending money’, but having a good time

The most expensive item was Jessica’s dress, costing £3,500 from Knutsford Wedding gallery. She said: ‘I knew no matter what I still wanted my ‘dream dress’. I was really lucky that my mum helped me with that.’

With everything set, Adam and Jessica put on their wedding outfits and prepared to meet the guests at St Bedes in Widnes on 24 July.

To finally let them know what was happening, the pair left a sign outside and leaflets for their guests to pick up as they arrived.

Jessica said: ‘A lot of people were shocked! Some of our closest friends and family were clueless and genuinely couldn’t believe it, but they were so happy for us. 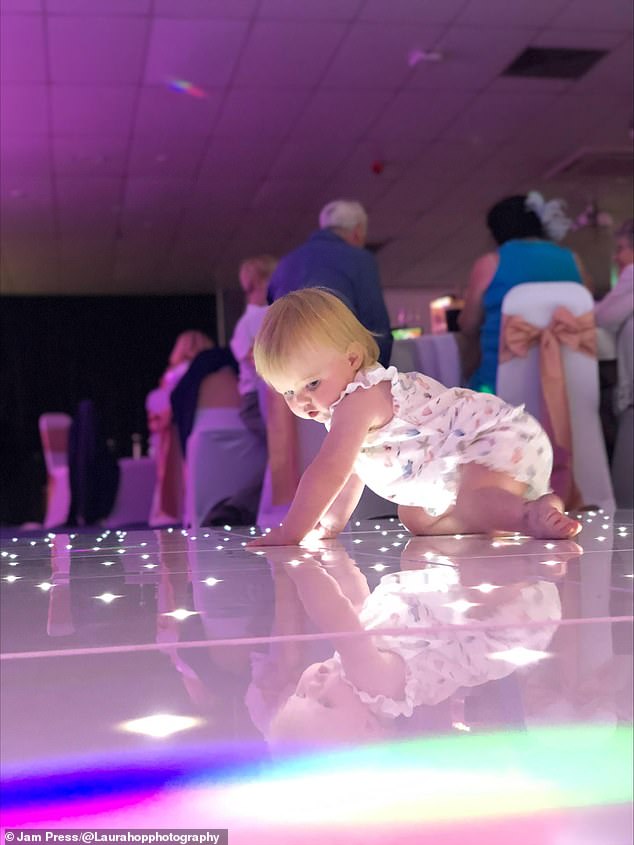 Disco baby: Lucia Jade takes to the dance floor at the joint christening/wedding do following the formal ceremonies earlier in the day 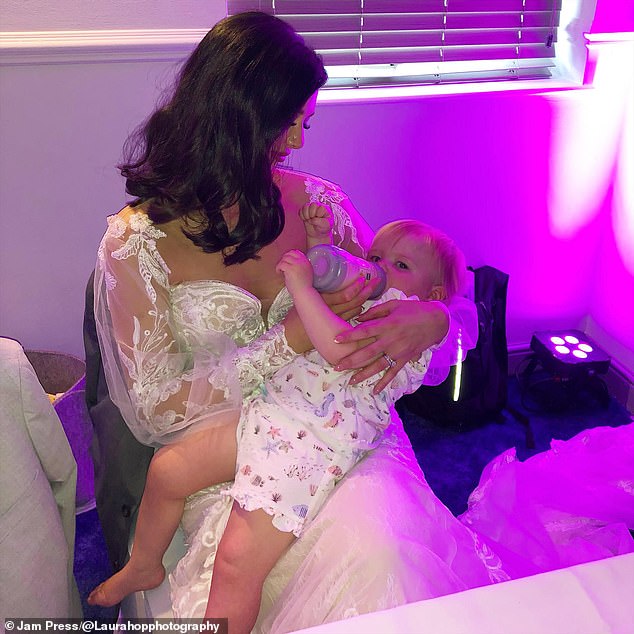 ‘Some people guessed because me and Adam are quite spontaneous like that and we certainly don’t do things by halves. Our relationship has progressed very naturally quickly. When you know, you just know.’

After the wedding, they threw a party at Widnes Rugby Club – and they couldn’t be happier with how it went.

Jessica said: ‘It was honestly the most perfect day. I stressed a lot because it wasn’t your standard sit down meal, seating plan wedding.

‘Covid stressed us out a lot. We risked having a wedding the week we would come out of lockdown. 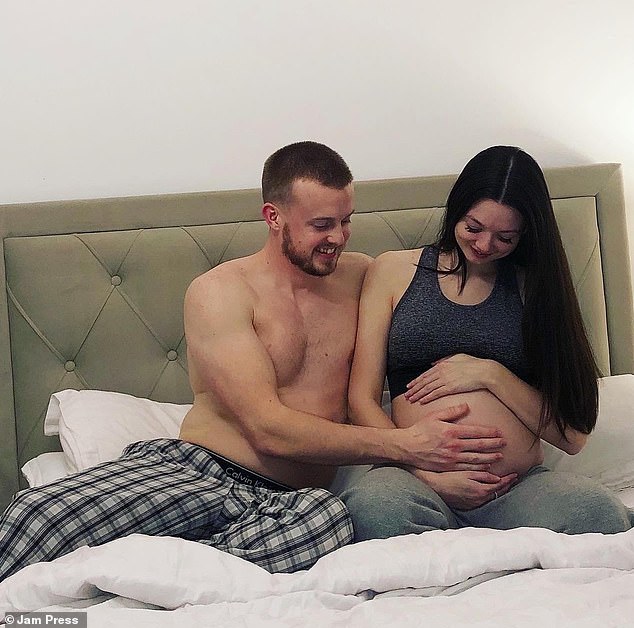 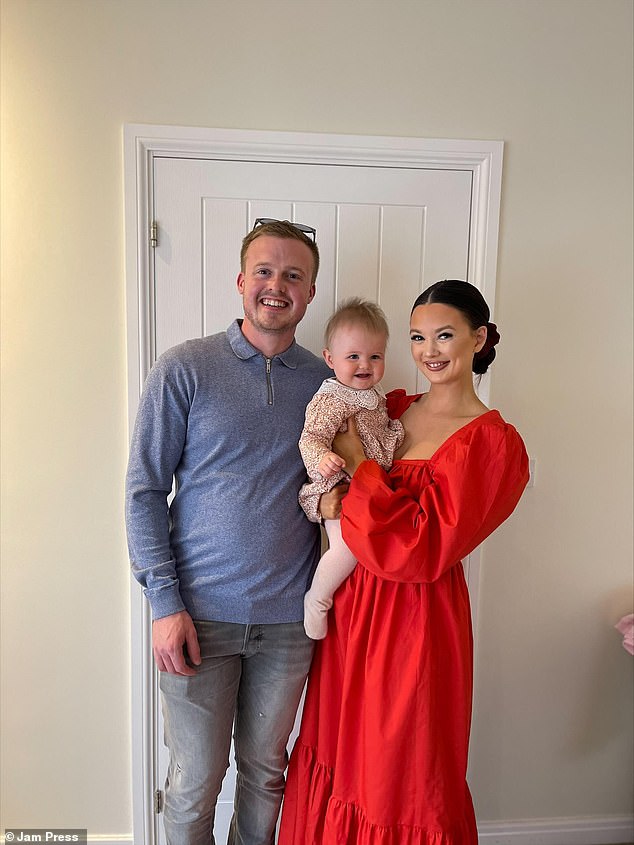 Lucia Jade (or ‘LJ) was born in April 2020 – as the first Covid lockdown was in full force, with mother Jessica describing her daughter as a ‘lockdown baby’ 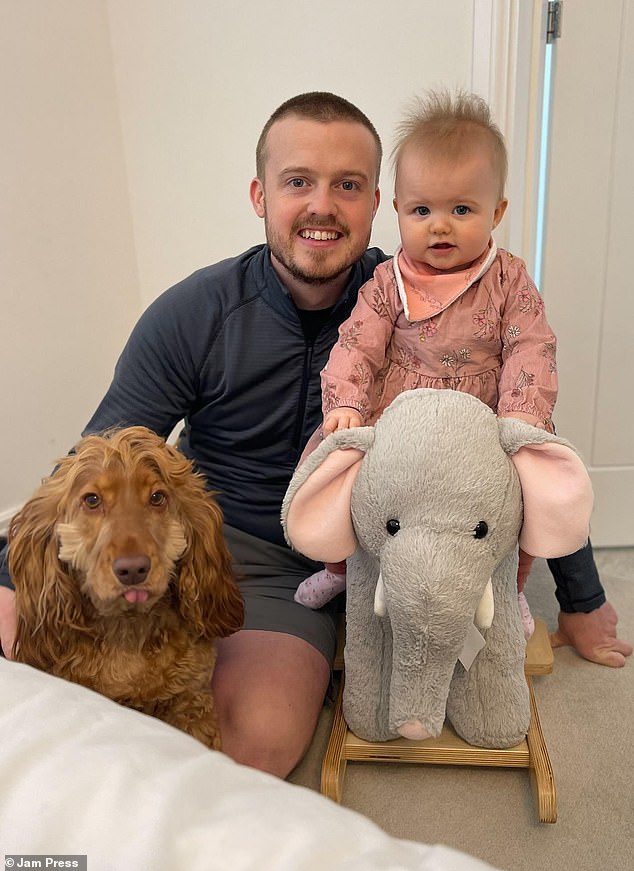 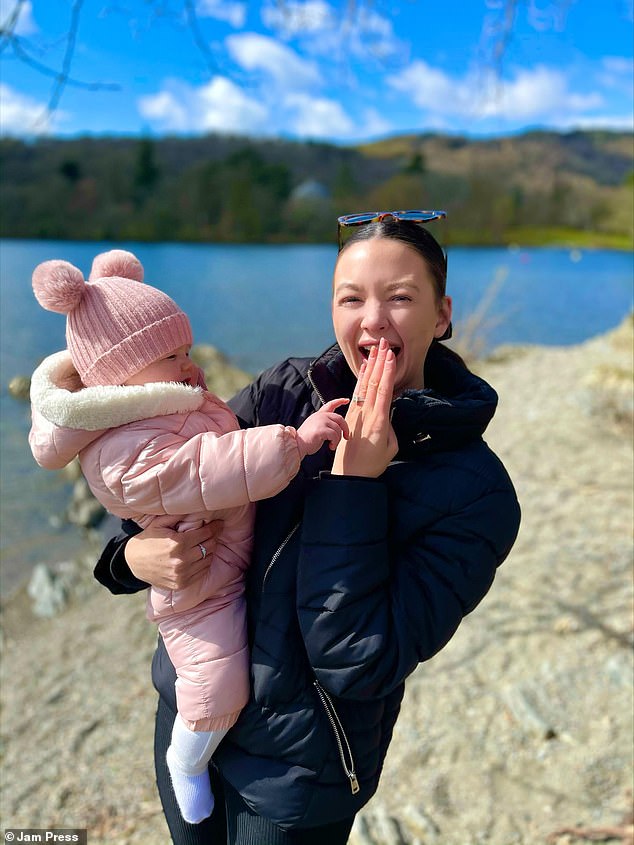 Although Jessica – pictured here with daughter LJ –  told Andy she did not need an engagement ring, he surprised her with a traditional proposal in the Lake District 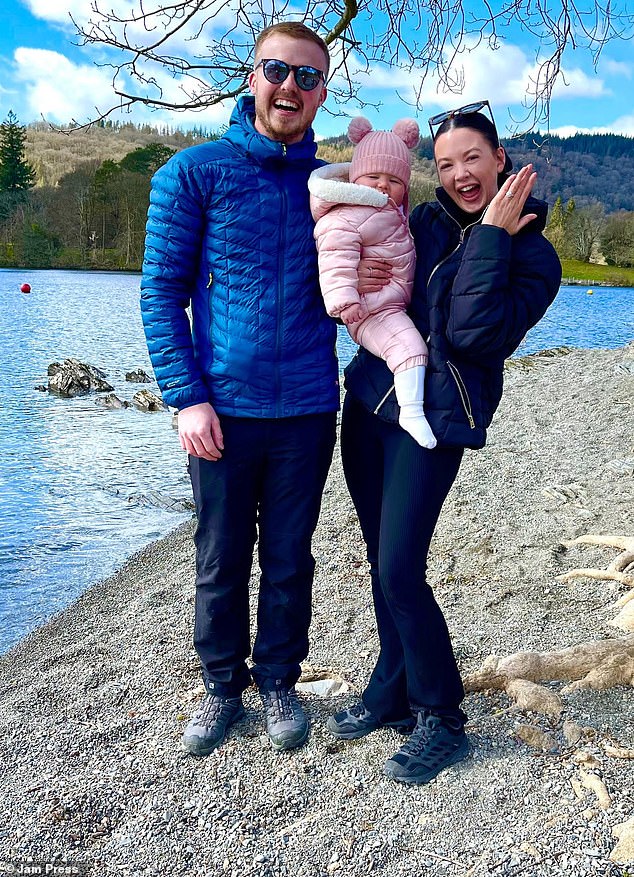 She said yes: Adam, baby Lucia Jade, and Jessica celebrate, and Jessica shows off her ring after saying ‘yes’ to Andy’s marriage proposal

‘I had to stop watching the news leading up to it because we were so unsure whether lockdown would lift – but it all came together amazingly and we just danced the night away.

‘Now it’s over, we feel so sad. We wish we could do it all over again. The wedding blues are real.’

The family are now onto their next adventure, having just accepted an offer on their house so they can follow their dreams of moving to Australia. Jessica said: ‘When one crazy plan ends, we create a new one.’ 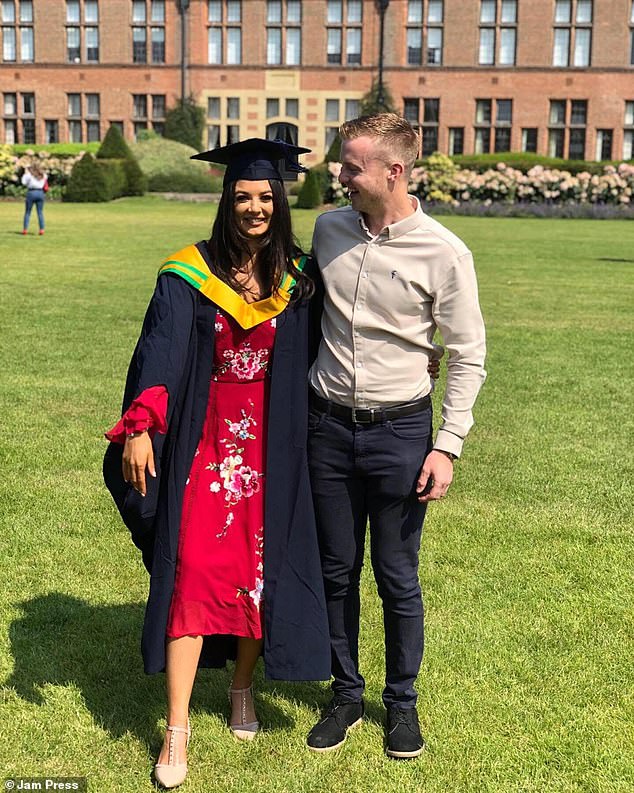 The happy couple met in the Summer of 2018, and officially became a couple in February 2019, with their relationship moving quickly 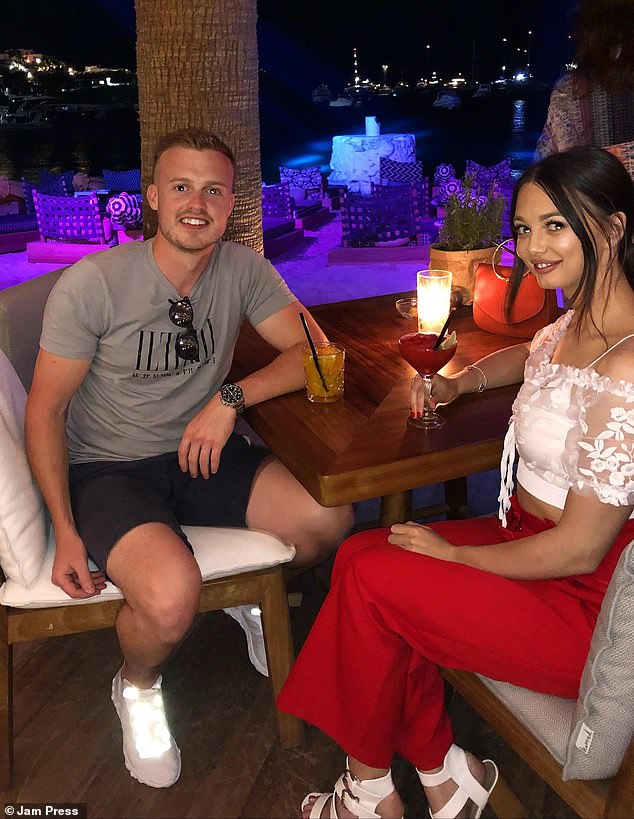 Adam and Jessica were expecting their baby daughter by the end of their first year together – but say that when a relationship is right, it is right 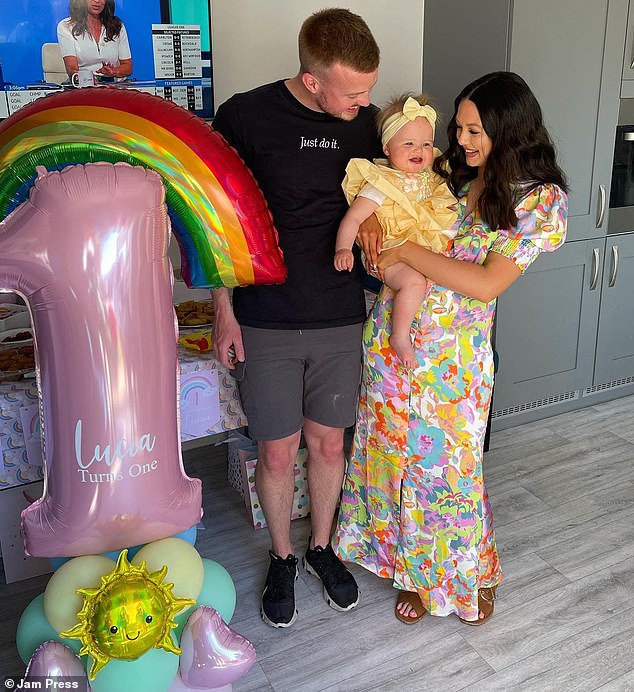 The couple, pictured here celebrating baby Lucia Jade’s first birthday, said their big day was perfect – despite concerns about Covid during the run-up to the event

REVEALED: How savvy shopper scored $500 worth of high-end wagyu beef for just $79 at…

Teen, 18, who said he was a victim of a drive-by shooting while his…