“They literally paint a giant stain on the wall!” Viewers in dressing rooms criticize designers for giving a woman who asked for a Scandi haven a cat-themed lounge with a ‘dirty protest’ mural

By Harriet Johnston For Mailonline

Viewers in dressing rooms were shocked last night after a couple of designers painted a large brown ‘swoosh’ on the wall of a contestant’s home – and many said it looked like a ‘sh** stain’.

Contestant Amanda, from Leeds, asked for a Scandi makeover for her drab beige lounge on the Channel 4 show, and designers Russell Whitehead and Jordan Cluroe were given the job.

They decided to make the room a cat theme for the self-proclaimed cat lady and as part of the design, they used a sweeping brush to paint a huge “abstract mural” across the wall and ceiling.

Many of those watching were stunned by the choice, with one writing, “They are literally painting a giant sh** stain on this woman’s wall.”

But seeing her new living space, with a yellow corner sofa and natural accents like a sisal rug, succulents, dried pampas grass, and neutrals, left an emotional Amanda completely blown away.

Another wrote: ‘If you think it couldn’t get any worse, they paint giant skid marks on the wall.’

Neighbors of 21, Amanda and Pauline, enlisted the help of Russell, Jordan and designer Laurence Llewelyn-Bowen to transform the lounges in their homes.

Russell and Jordan decided to add some character to Amanda’s drab white and gray living room.

The room was filled with beige furniture and her three cats had nowhere to go.

Despite the designers’ enthusiasm for the ‘abstract mural’, many of the onlookers remained in disbelief at the brown ‘smear’

They described their design as “cool, Californian, Kardashian-esque” and used neutrals like pale pink, cream and brown to create the space.

They said the plan was called “Hear Me Roar” in tribute to Amanda’s three cats and her “ghost.”

While practicing the mural’s design outside, Russell and Jordan compared the artwork to “a dirty protest.”

The couple could barely contain their giggles as they loaded a brush with brown paint and began to sweep it across the wall in a “swoosh” motion. 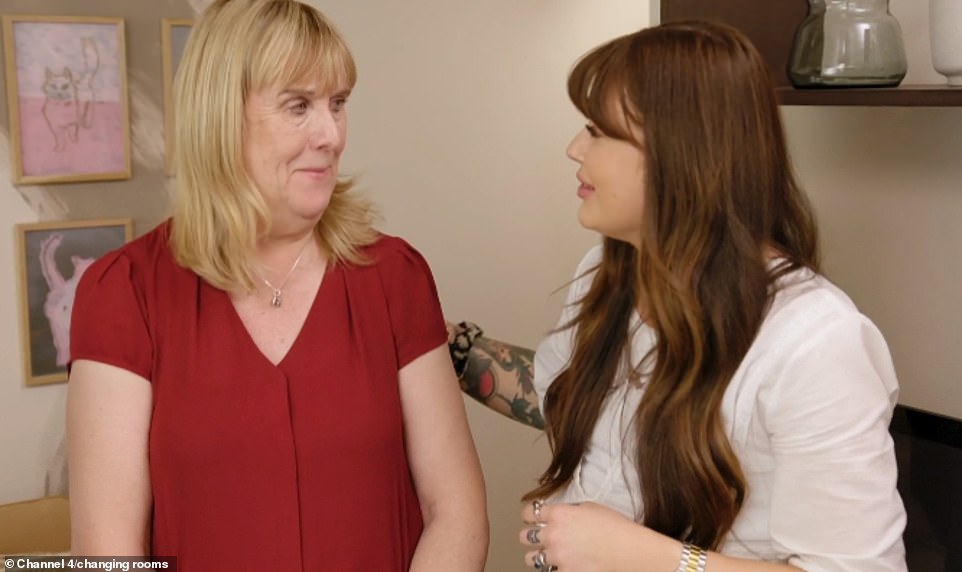 Meanwhile, both Amanda and her daughter Rachel insisted they loved the brown “swirl” and were left in tears over the makeover, themed around their three cats. 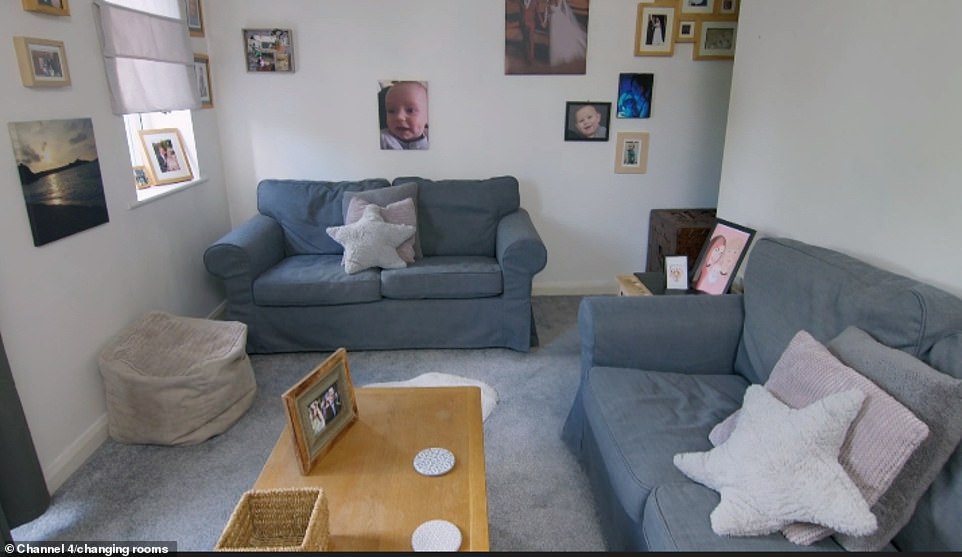 Amanda asked for a Scandi makeover for her drab gray lounge (photo before the makeover), and designers Russell Whitehead and Jordan Cluroe were given the job 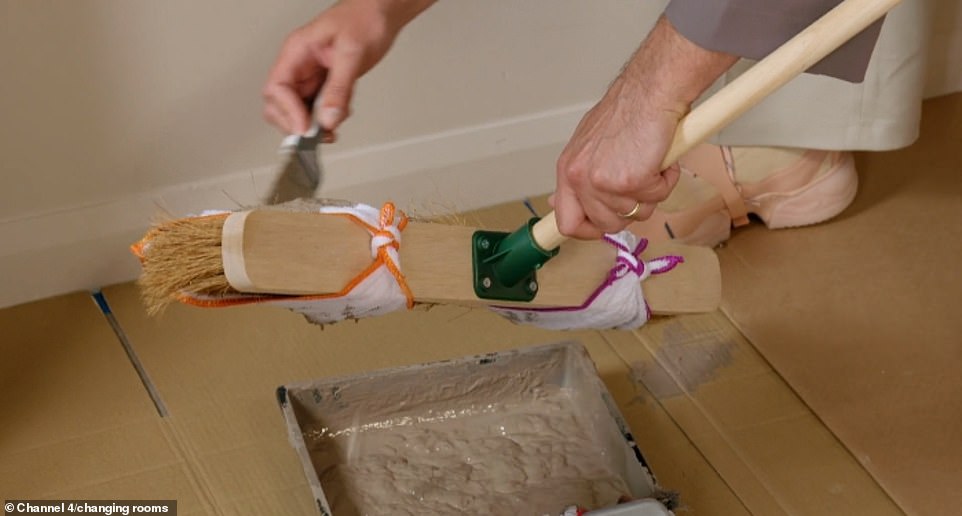 After admitting that the mural might look like “a dirty protest,” the designers went ahead and started slapping the brown paint on the brush to create the artwork.

Meanwhile, host Anna Richardson confessed that she was stunned by the design and laughed at the brown mural.

She later said, “The abstract mural, exploding against the wall and on the ceiling, looks amazing.”

But when she saw her new living space, an emotional Amanda was completely blown away. 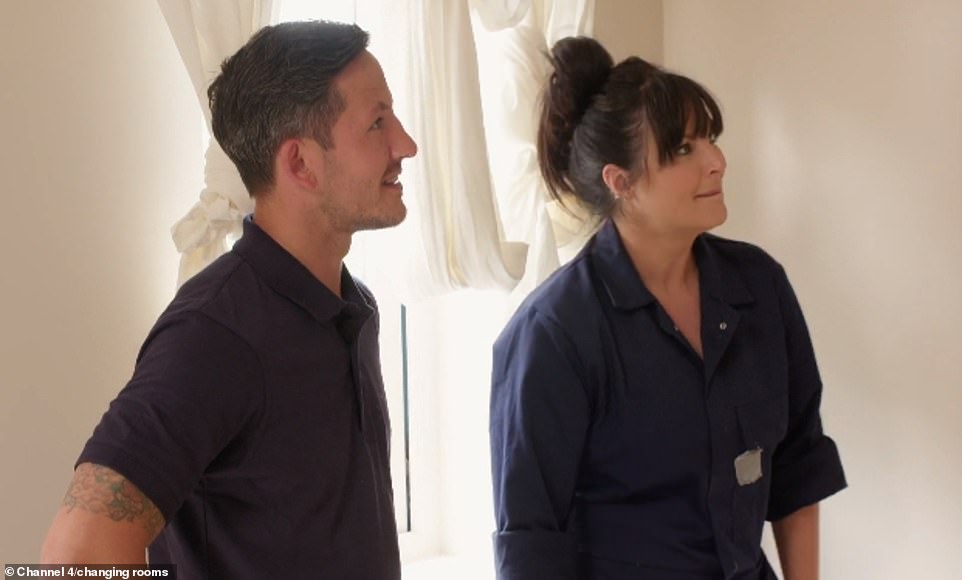 Meanwhile, her daughter Rachel said, “It’s so much fun. It’s just what she deserves.’

They both insisted they liked the brown “swirl,” and Amanda added, “I can’t take it all in.”

However, many spectators were left in disbelief about the brown ‘spot’.

Someone commented: This lady on #ChangingRooms literally just… has a cat and they give her a whole cat themed living room as if the inspiration is Catwoman and they make a bookcase/cat holder (I don’t know what it’s called, like a climbing tower? ) HELP HER.’

Another wrote: ‘Aye cheers #ChangingRooms, great job along the walls and ceilings, just what I wanted, thanks.’

US Open: Bizarre scenes, match suspended due to rain despite DAK being closed