Bomb sniffer dogs abandoned at the Kabul airport during the chaotic US withdrawal are now working for Taliban contractors who rescued them from cages.

Dozens of dogs were discovered in US troops and Afghan police precincts of the airport by employees of a company contracted to manage site security.

Workers are now training the dogs before returning to work as the airport is gradually reopening after a month-long closure after the Taliban took power on August 15.

While it’s unclear who the dogs belonged to, many were found in the area of ​​the airport used by US troops, and some were trained to detect explosives, their new handlers say.

The animals are among the remnants of the two-decade US intervention that ended with the rushed airlift of more than 120,000 people from Kabul in August. 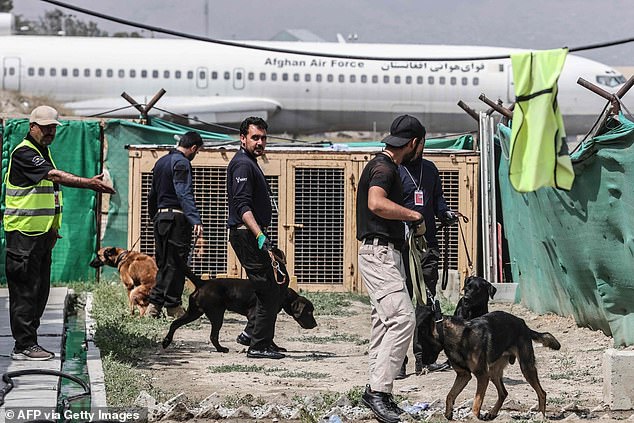 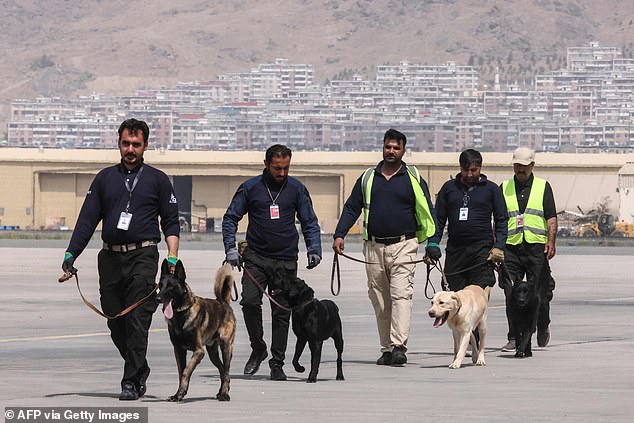 The dogs, found at Kabul airport after the US withdrawal on August 30, are said to have been trained to detect explosives 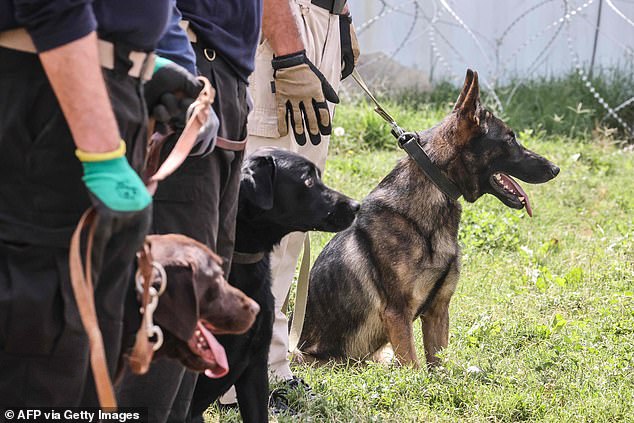 The dogs are being cared for by handler Hewad Azizi, who works for an airport security company that began searching for abandoned animals when the chaotic US-led evacuation ended on Aug. 30.

The dogs are now being fed, cared for and trained by Hewad Azizi, who works for an airport security company, and his colleagues at the security company’s training center, housed in two converted shipping containers separated by a weed-strewn strip of soil.

He said he started looking for abandoned dogs as soon as the last American soldier left.

‘When I saw [the soldiers leaving] I went to rescue the dogs,” Azizi said at the training center, which overlooks hangars used for US planes and military equipment.

He found 30 – half of them in the area controlled by US troops. More were found in areas belonging to the former Afghan police.

The dogs are now being fed, cared for and trained by Azizi and his colleagues at the security company’s training center, housed in two converted shipping containers separated by a weed-strewn strip of soil.

The United States withdrew its last troops from Afghanistan on August 30, ending America’s longest war just before the anniversary of the September 11, 2001 attacks that sparked the US-led invasion.

Hours after the last soldier left, animal rights group PETA said in a statement that 60 bomb-sniffing dogs and 60 other “working dogs” were left behind by US troops.

The group called on President Joe Biden to “take immediate action” and warned that the dogs “suffer in the heat without adequate access to food or water.” 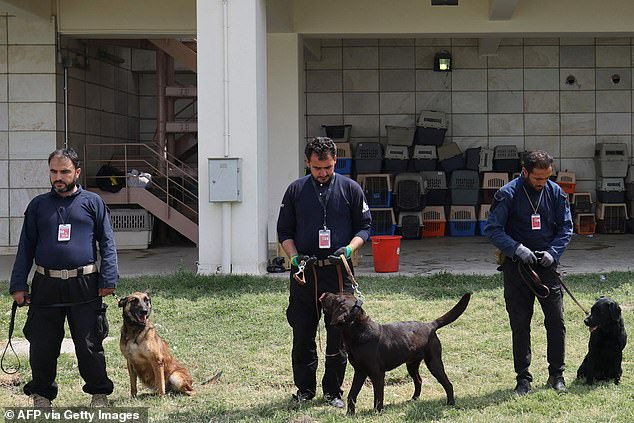 At least 30 dogs were found at the airport after the US withdrawal on August 30 – half of them in the area controlled by US troops, and more were found in areas belonging to the former Afghan police 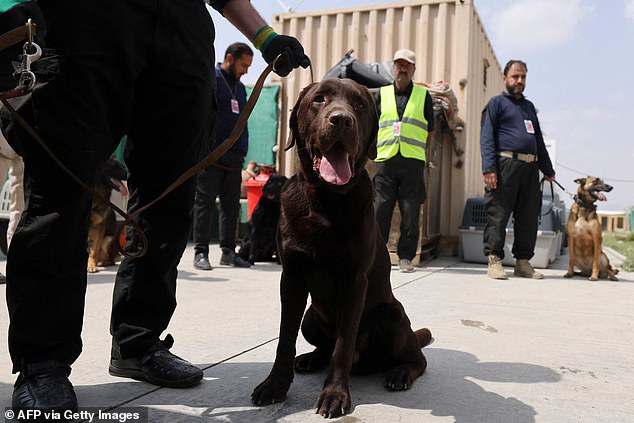 The dogs are now fed, cared for and trained at the airport security company’s training center, housed in two converted shipping containers separated by a weed-strewn strip of soil. 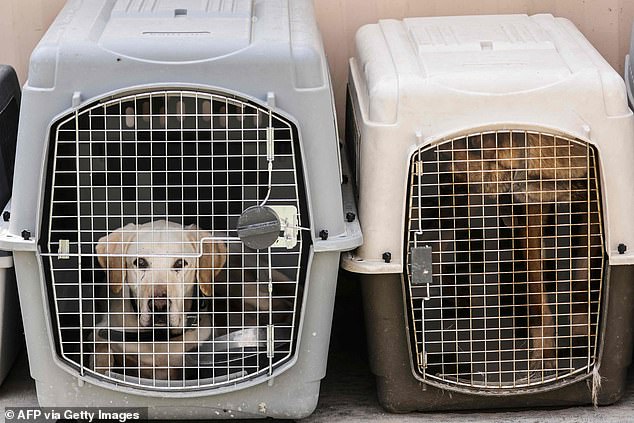 The Pentagon has denied leaving dogs in cages at the airport during the chaotic evacuation of Kabul in August, but the new handlers claim they found the animals in a US troop zone.

The Pentagon was quick to deny that US military personnel had left some of their dogs at the airport.

Azizi and his colleagues are unsure of the identity of the previous owners. All they are focusing on now is how to get back to work once the airport returns to normal.

“We trained with them to find out exactly what they are used for,” he explained, adding that they realized that “they are bomb dogs.” 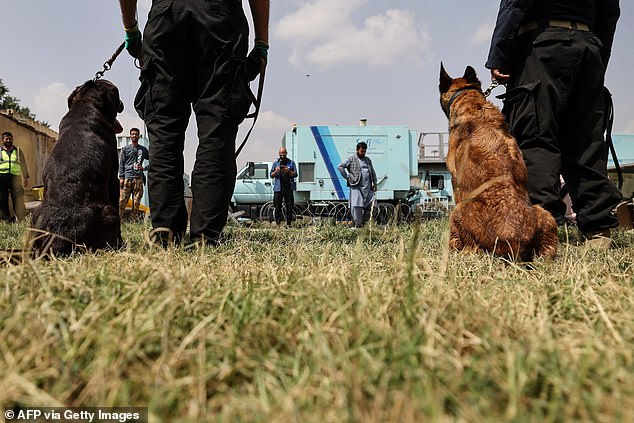 The dogs’ new handlers aim to return the dogs, believed to be capable of sniffing explosives, to work at the airport as commercial flights resume 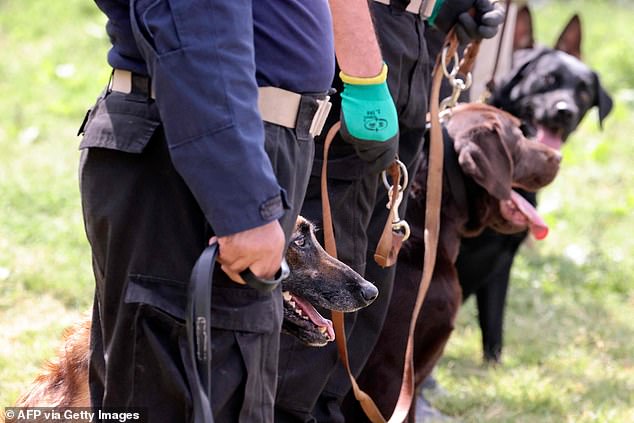 The dog handlers tested the animals’ ability to sniff out explosives, planting objects that smell like bombs in a wasteland of strewn bullet casings and empty pockets of US military meal rations. 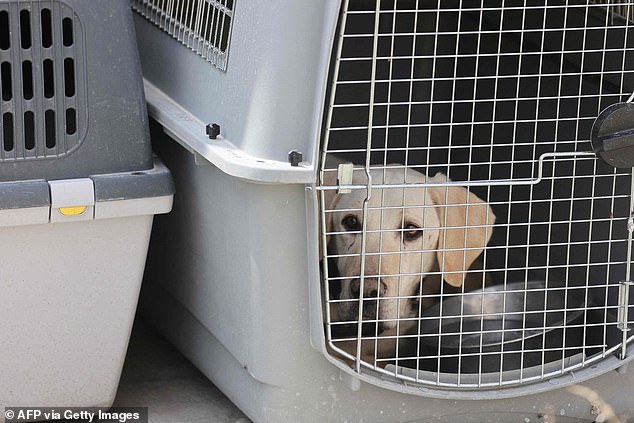 The dogs were found in cages belonging to the United States Armed Forces and former Afghan police districts of the airport after the chaotic evacuation of Kabul ended on Aug. 30. 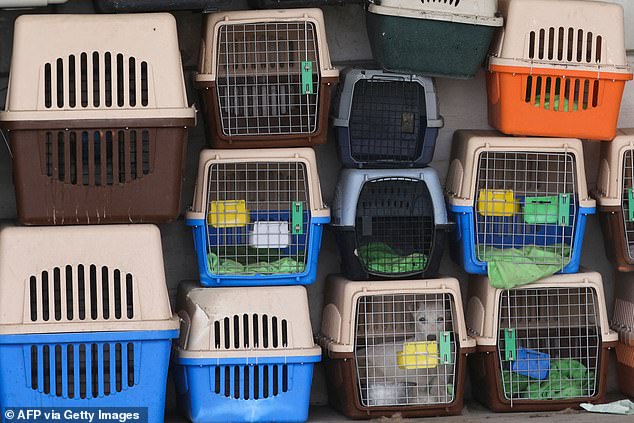 The dogs will soon be put to work as the airport, which was closed for repairs after the evacuations, is gradually reopening

Azizi’s favorite dog, Rex, a dark brown Malinois, is one of the recent discoveries.

Every day he takes Rex for a walk in a small deserted area a few meters away from three old Afghan Air Force planes.

On a small patch of land littered with bullet casings and empty pockets of US military meal rations, he hides a box that smells of explosives and sends Rex out to find it.

Seconds later, Rex returns with the box and is rewarded with a ball to play with.

“We train them to see how we can use them,” explains Mohamad Mourid, a supervisor at the center operating under the umbrella of GAAC, the UAE-based company that has been conducting ground and security operations at the airport since last year. .

“We feed them, water them and clean them.”

The dogs will soon be put to work as the airport, which was closed for repairs after the evacuations, is gradually reopening.