The mother of a victim of a British terrorist who was part of an IS cell nicknamed ‘the Beatles’ called on the killer today to tell authorities where her son’s remains are located.

Diane Foley, the mother of James Foley, 40, who was the first of four American hostages to be murdered, was in a US federal court yesterday to see 37-year-old Alexanda Amon Kotey plead. guilty of multiple charges.

Kotey, who grew up in London, conspired to kidnap and behead Western hostages for ISIS and was one of the militants nicknamed ‘The Beatles’ by their inmates for their British accents. 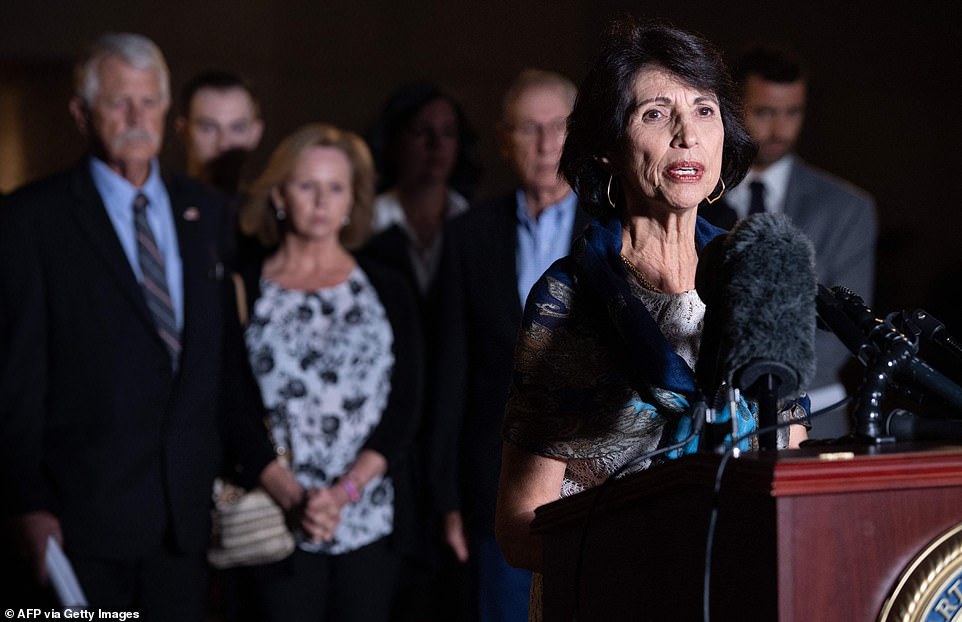 Diane Foley (right), mother of slain American hostage James Foley, speaks with the parents of other murdered hostages after Alexanda Kotey’s admissions of guilt outside US district court in Alexandria, Virginia yesterday. 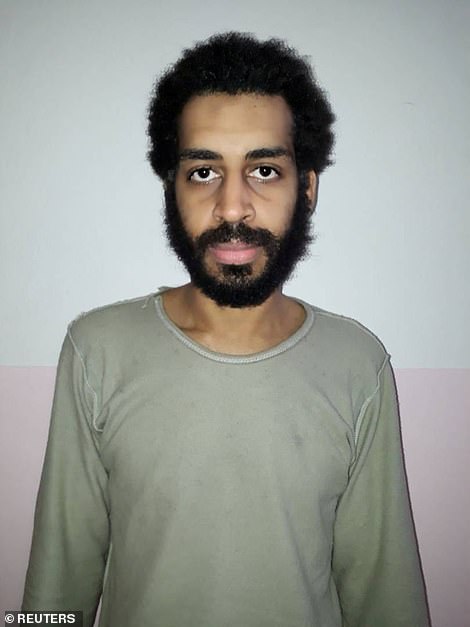 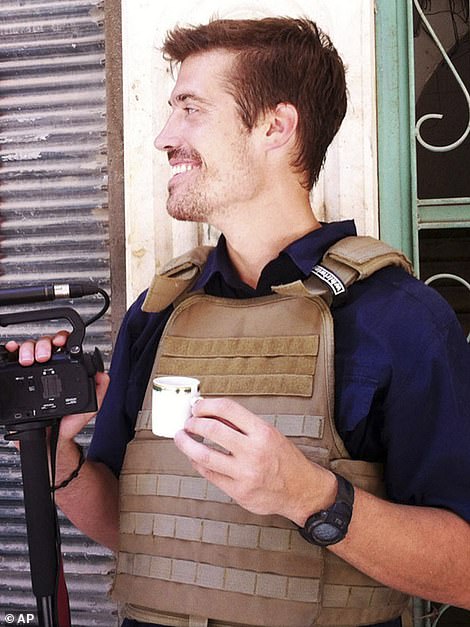 Ms. Foley was among the relatives of the American victims who were in court in Alexandria, Virginia, to hear details of the charges and see Kotey plead guilty.

Kotey now has to spend the rest of his life behind bars – and asked if there was any way to make up for it, Ms Foley told BBC Radio 4 Today’s program this morning: ‘I don’t know, that’s up to him.

“I’ve had no indication that he was interested in that, but I would hope he could in the long run, if only because of the magnitude of the evil he committed. I don’t know of a soul that could live with that, but that’s just my opinion.

“We all want to know where our children’s remains are. I would also very much like to know if there are still people alive who were also involved.

“These are two people who were quite involved in the hostage-taking and torture of our son Jim and Peter (Kassig), Kayla (Mueller) and Steven (Sotloff). But I think there may be others who are still alive.

“I hope he may have some answers for the poor Muellers to learn more about their daughter Kayla, and for John Cantlie I hope part of this understanding is that Kotey is willing to work with our government, your government and all the rest of us who want to speak to him.’

Talking about what it was like to be in court, Ms Foley added: ‘It was quite chilling to be there, as it was the first time we’ve ever seen him in person.

The mere fact that he pleaded guilty to all eight charges was truly astounding, and it really makes me want to thank your Scotland Yard and our FBI and our Justice Department for putting together such a strong case that he would feel the need to plead guilty today.

“So we are grateful for the work of all the good people, and of course the Syrian Democratic Forces who actually arrested Kotey and Elsheikh.

“So we are very grateful for the work of all the good people on both sides of the Atlantic in this regard.”

“From his point of view, it was pretty self-explanatory. He had clearly decided that this was his best chance of ever coming home to the UK.

“He just felt that this was what he had to do. So I’m glad he did plead guilty, and I hope he spends the rest of his life behind bars without ever getting parole.

“To be honest, I almost think a quick martyrdom is too easy a way out for what he’s done. I was always against the death penalty.

“But I believe that accountability is essential for anyone who kidnaps or wrongfully detains our citizens, otherwise our countries can never hope to deter this horror of hostage-taking. This step in accountability was essential.’

And when asked about the effect on her of an ISIS affiliate reviving in Afghanistan, Ms Foley said: “Very sobering, so sobering, to think that the horror of this terrorism continues.

“It certainly hasn’t stopped, and I fear many more hostage situations are possible. They like to use the horror of it to frighten us, manipulate other governments and raise money for their evil works. So I’m very sobered by that, very sad.’

The murders by ‘The Beatles’ – who were responsible for the murders of Britons Alan Henning and David Haines – sparked outrage and disgust around the world after being broadcast in detail.

Kotey has agreed to fully cooperate with authorities as part of his plea deal, the court was told.

Kotey turned to the court to outline his involvement in the atrocities. He was interrupted repeatedly by District Judge TS Ellis, who told him his statement was more appropriate for the sentencing hearing.

In a prepared summary, he said he and Emwazi left the UK for Syria in August 2012.

He said he was leaving to “go into battle with President Bashar Assad’s Syrian forces.”

Kotey said that on his departure from the UK he “had the belief and understanding that the Islamic concept of armed jihad was a valid and legitimate cause and means by which a Muslim defends his fellow Muslim against injustice.”

He confessed to his role in the capture of hostages, saying that when his involvement in it ended, he was working in the IS recruiting division, as a sniper and in the terror group’s ‘English media division’.

Kotey said that while working for IS, he came into contact with Mr Henning, Mr Haines and John Cantlie, a British war correspondent who disappeared in 2012 and is still missing.

He told the court: ‘By the order of the senior leadership of the Islamic State, I, along with others, have opened channels of negotiation with the authorities, families and representatives of those detained and detained by the Islamic State.

“This involved visiting the detention facilities where the foreign detainees were held and interacting with them in any capacity that would increase the prospects that our negotiation requirements would be met.”

Kotey said his job would be to “extract” contact information from loved ones of hostages.

The terrorists would then demand the release of Muslim prisoners held by the West or large sums of money in exchange for the freedom of the hostages.

Kotey said, “I had no doubt that any failure by those foreign governments to meet our demands would eventually lead to the indefinite detention of those foreign prisoners or their executions. ‘

He said he was not physically present at the murders of the Western prisoners.

Kotey was captured in Syria in 2018 along with Elsheikh by the US-backed Syrian Democratic Forces while trying to escape to Turkey.

Details of Kotey’s plea deal were read in court, showing that the Briton has agreed to cooperate fully with the US government.

He will provide “complete, complete and truthful” evidence not only to the US, but also to all foreign governments.

Kotey will provide all relevant documents, meet with the victims’ families if they wish, and voluntarily submit to a lie detector test.

However, the terrorist will not be forced to testify in court against co-defendant Elsheikh, the hearing was told.

As part of the plea deal, Kotey could be transferred to the UK after spending 15 years behind bars in the US to face trial in the country of his birth.

The court was told Kotey would plead guilty in the UK and likely receive a life sentence for the deaths of hostages, including Mr Henning and Mr Haines.

However, if he does not get a life sentence, Kotey will complete his life sentence handed down in the US either in America or the UK.

US Attorney General Dennis Fitzpatrick read the evidence against Kotey and outlined his role in the atrocities, including subjecting the hostages to brutal treatment.

They were terrorized with mock executions, taser shocks, physical coercion and other brutal acts.

Kotey and Elsheikh were brought to the US last year to face charges on the condition that they not receive a death sentence.

Although Kotey has now pleaded guilty, there was no update on Elsheikh, who will face trial in January.

Emwazi was killed by a US drone strike in 2015 while Davis is serving a sentence in a Turkish prison.

Former aircraft engineer and humanitarian Mr. Haines, 44, from Perth, Scotland, was beheaded in Syria in 2014 after being imprisoned for 18 months.

The 47-year-old taxi driver turned aid worker was also beheaded in 2014 after being captured by extremists in Syria.

Kotey and Elsheikh had participated in and been arrested during a demonstration outside the US embassy in London in 2011 in support of the 9/11 attacks.

The following year they traveled to Syria. Kotey will be sentenced on March 4 next year.