Meat and dairy are responsible for 57 percent of food-induced greenhouse gas emissions, according to a new computer modeling study.

Overall, global food production, taking into account changes in farmland, livestock and land use, is responsible for 17.318 billion tons of greenhouse gas emissions per year, the authors say.

Beef and rice are the main animal and vegetable commodities, contributing to 12 and 25 percent, respectively, of total greenhouse gas emissions worldwide.

The fact that global emissions from animal food production are nearly double those from plant-based food production further suggests the environmental benefits of switching to a meat-free diet. 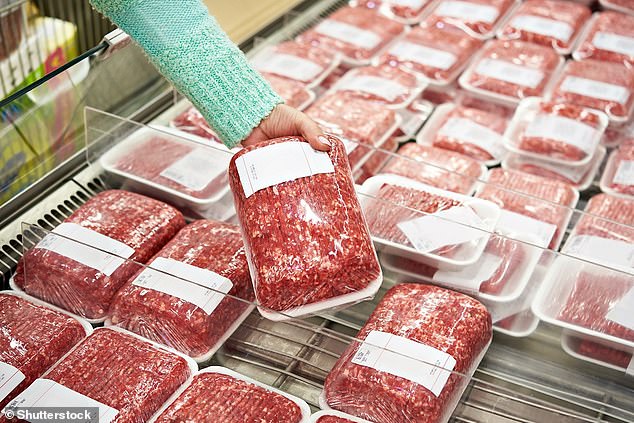 Global greenhouse gas emissions from animal foods, including but not limited to red meat (pictured), are twice that of plant foods, study reveals

Broken down by type of food:

Meat-rich diets not only endanger our health, but also that of the planet, as livestock farming on a large scale destroys habitats and generates greenhouse gases.

The study was conducted by a team of international experts led by Atul Jain, a professor of atmospheric sciences at the University of Illinois, Urbana-Champaign.

It is the first to take into account the net emissions of carbon dioxide (CO2), methane and nitrous oxide from all subsectors related to food production and consumption.

‘Although CO2 is the most important and most discussed GHG [greenhouse gas] emissions, methane generated by rice cultivation and animals, and nitrous oxide from fertilizers are respectively 34 and 298 times more potent than CO2 when it comes to trapping heat in the atmosphere,” said lead author Xiaoming Xu.

The study examined the four main plant and animal food emissions subsectors associated with food production processes from 171 crops and 16 animal products around the world.

These four subsectors are defined as changes in land use, farmland management, animal husbandry, and activities that take place once food leaves the farm.

Using a unified data modeling framework, the researchers built an open-access database that ensured “complete consistency” between these subsectors.

This enabled the estimation of the three global greenhouse gas emissions – CO2, CH4 and N2O – from plant and animal foods for humans. 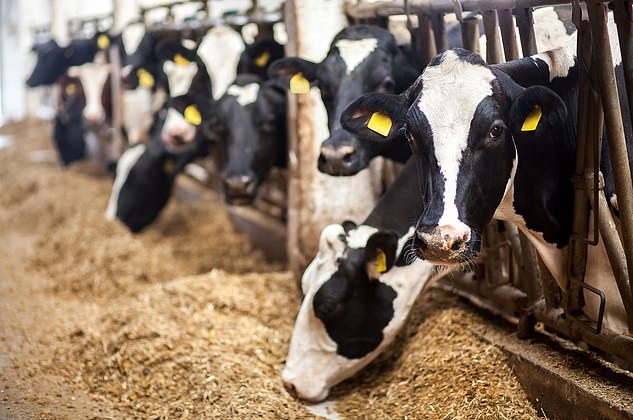 Meat-rich diets not only endanger our health, but also that of the planet, as livestock farming on a large scale destroys habitats and generates greenhouse gases

The research found that food-based agriculture is responsible for 35 percent of all human-caused greenhouse gas emissions.

As for plant foods, rice was responsible for the most emissions — more than 2,000 teragrams — followed by wheat, sugar cane, maize and cassava, a starchy root vegetable native to South America.

Also in the top 10 plants with the most greenhouse gases were potatoes, soybeans, beans, canola and mustard and sunflower. 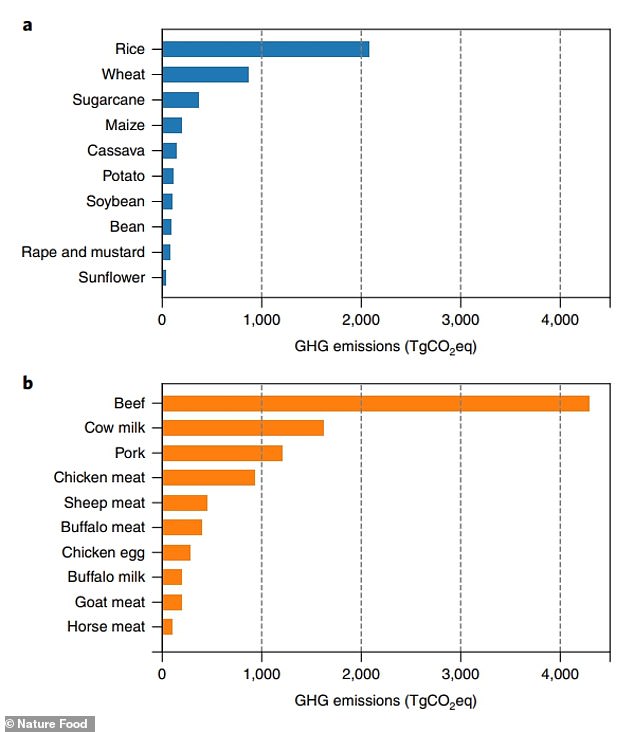 In terms of location, South and Southeast Asia and South America are the largest emitters of production-based greenhouse gases.

Countries with the highest greenhouse gas emissions from animal foods are China at 8 percent, Brazil at 6 percent, the US at 5 percent and India at 4 percent.

Meanwhile, the countries with the highest greenhouse gas emissions from plant foods are China at 7 percent, India at 4 percent and Indonesia at 2 percent. 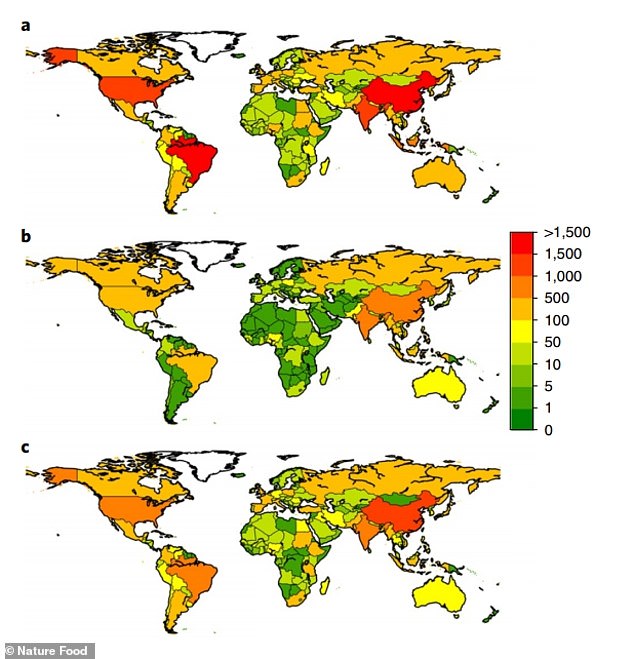 “We estimate that population growth will drive the expansion of food subsectors, including crop and livestock farming, as well as transportation and processing of produce, irrigation and materials such as fertilizers and pesticides,” Jain said.

“Developing climate mitigation strategies must be based on accurate estimates of greenhouse gas emissions from all sources, including those from the production and consumption of total and individual plant and animal foods.”

The full findings of the study are published today in the journal Nature Food.

HOW DOES EATING MEAT AND DAIRY HARM THE PLANET?

Eating meat, eggs and dairy products is harmful to the environment in several ways.

Cows, pigs and other farm animals release massive amounts of methane into the atmosphere. Although there is less methane in the atmosphere than other greenhouse gases, it is about 25 times more effective than carbon dioxide at trapping heat.

Animal husbandry also means converting forests into farmland, which means cutting down CO2-absorbing trees, further amplifying climate change. More trees are being cut to use land for growing crops, as about a third of all the grain produced in the world is used to feed animals raised for human consumption.

In addition, the nitrogen fertilizer used on crops contributes to nitrous oxide emissions. Laughing gas is about 300 times more effective at trapping heat in the atmosphere. These fertilizers can also end up in rivers, further increasing pollution.

Overall, studies have shown that eating vegetarian can cut your carbon dioxide emissions by half. Going vegan can reduce this even further.

Jeff Bridges, 71, says his cancer is in ‘remission,’ caught COVID-19