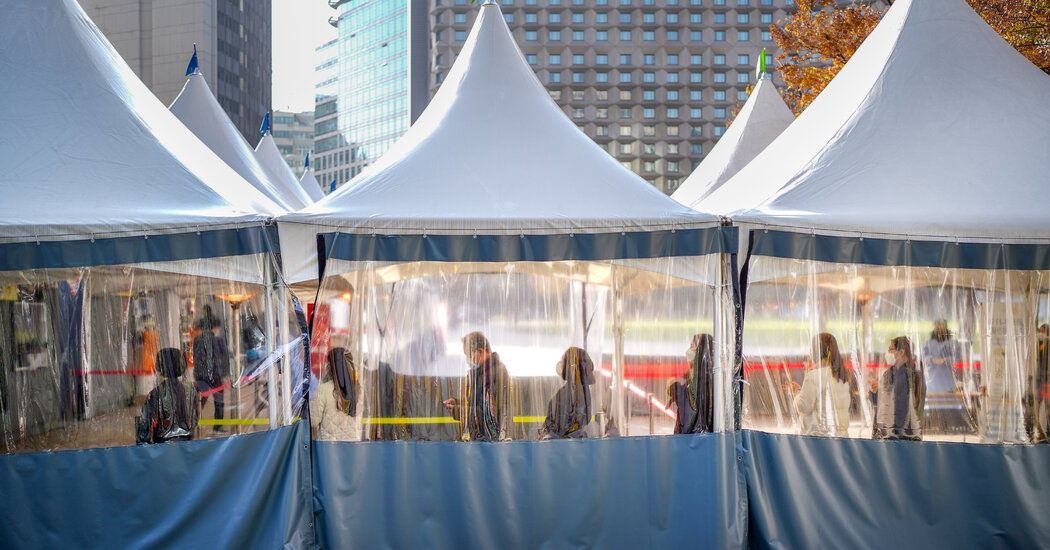 South Korean officials said Friday they would temporarily reverse the phased reopening they began last month, lower the group size limit for social gatherings and require proof of vaccination or a negative coronavirus test for access to restaurants, cafes and others. facilities from next week.

The announcement by Prime Minister Kim Boo-kyum came as nearly 80 percent of hospital beds for patients with serious illness were in use in the country, and days later, six cases of the Omicron variant were confirmed among inbound travelers.

On Friday, officials said they had confirmed South Korea’s first Omicron cluster, a cluster associated with a church.

At least two members of a church in the city of Incheon have been confirmed to have the variant. They had prayed along with two travelers who tested positive after a trip to Nigeria, the Korea Disease Control and Prevention Agency said in a statement. Another 800 people who may have been exposed are being tested.

Churches have been the site of previous major coronavirus outbreaks in South Korea, including one identified last month at a 500-member religious facility in Cheonan city, where 445 cases have now been confirmed, more than 400 of which were among unvaccinated people. , local authorities said.

In his announcement on Friday, Mr. Kim that the government would limit private meetings for four weeks. In and around Seoul, where gatherings have had a maximum of 10 people, the limit will be six; other areas had a limit of 12, which is reduced to eight.

New daily cases in South Korea have risen steadily over the past two months, from about 1,500 in mid-October to 5,266 on Thursday, the highest level in the country since the start of the pandemic.

“Our gradual recovery to everyday life now faces its greatest threat yet,” said Mr. Kim. “All pandemic indicators across the country are sending danger signals.”

Most of those hospitalized were unvaccinated, over the age of 60 or had pre-existing conditions, health officials said. While 80 percent of the population has been fully vaccinated, rates for children have remained low, with only about 20 percent of 12 to 17-year-olds fully vaccinated, according to official statistics.

To encourage vaccinations in children, Mr Kim said, South Korean officials will start demanding vaccine passes for them from February.

South Korean officials have also tightened curbs at the border since confirming the first cases of the Omicron variant on Wednesday. On Friday, the government began to end quarantine waivers for inbound travelers from all countries and began requiring visitors to observe a 10-day quarantine period and undergo three rounds of PCR testing upon arrival.