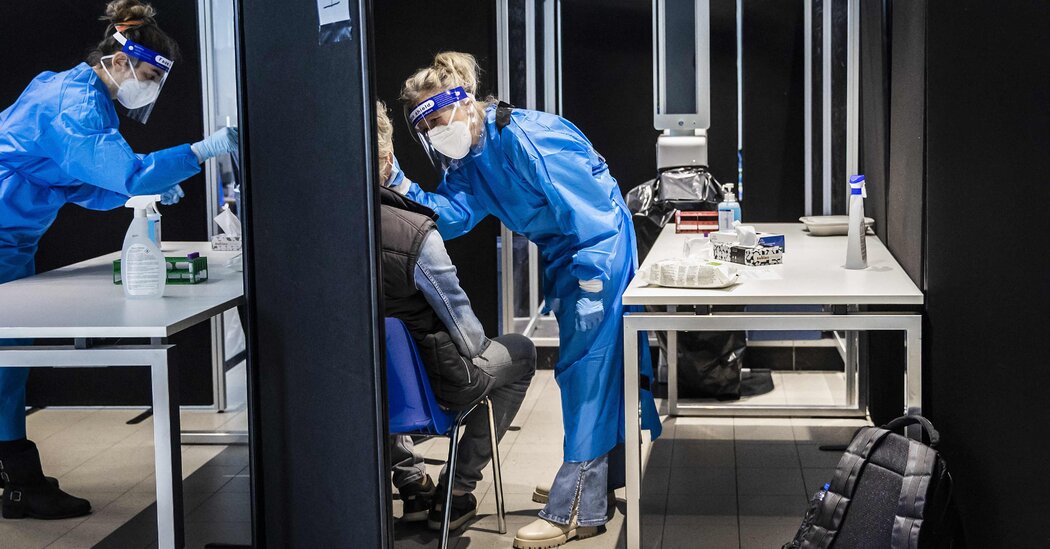 The discovery of the Omicron variant in more than 10 European countries, including Denmark, the Netherlands and Great Britain, increases the pressure on a continent already collapsing under the strain of Covid. In Austria, Germany and the Netherlands, the number of infections has already risen to double the peak of last winter.

Two KLM flights from South Africa to Europe may have contributed to the spread of the new variant, about which little is known. Of the more than 60 passengers who tested positive for the virus, at least 14 had Omicron, according to Dutch officials.

Andrea Ammon, Europe’s top disease control official, said all people in Europe who were confirmed to have contracted the Omicron variant showed mild symptoms or no symptoms at all. The variant has been found in at least 20 countries, raising the question of whether the pandemic will strike again.

Britain: In response to the variant, Prime Minister Boris Johnson banned travelers from 10 African countries, made masks mandatory in shops and on public transport and accelerated the use of booster vaccinations.

Protests have erupted around Turkey after the lira crashed last week, following months of deteriorating economic conditions for the country’s citizens. The currency has lost more than 45 percent of its value this year and nearly 20 percent in the past week, continuing yesterday’s downward trend.

Economists linked the currency crisis to direct interference from the country’s leader, Recep Tayyip Erdogan, in monetary policy. The currency’s latest crash came after Erdogan outlined his determination to keep interest rates low as a way to promote economic growth.

Amid unusual rumblings of public dissension, dozens of people have been arrested for joining street protests. Last Wednesday, police detained 70 people in several districts of Istanbul protesting the government’s management of the economy after the lira’s record drop the day before.

Political response: Opposition parties reiterated their calls for the government to step down and for Erdogan or parliament to call early elections. Yet they are in a predicament, without the seats to force a vote for snap elections and wary of creating unrest that could prompt Erdogan to declare a state of emergency, which would suspend normal democratic procedures. .

For years, Greek officials have denied allegations that the country’s border agents assaulted and forcibly pushed migrants back to Turkey, dismissing the claims as fake news or Turkish propaganda. A single case involving an EU interpreter, who was mistaken for an asylum seeker, can now force a settlement.

The interpreter, an EU legal resident employed by Frontex, the bloc’s border agency, said he was attacked by Greek border guards in September and then crossed the border into Turkey with dozens of migrants. He has since handed over evidence to Frontex to substantiate his abuse allegations, according to European officials handling his case.

The EU, which has largely looked the other way at the abuse of migrants, is now being forced to tackle the problem, long claimed by human rights groups. But a statement from the Greek government cast doubt on his story, saying the initial investigation had suggested “the facts are not as presented”.

Answer: “I was very concerned about his story,” said Ylva Johansson, the European Commissioner for Migration. The interpreter told her he had witnessed at least 100 migrants being pushed over the border and sometimes shaken up, she said.

After a year of reading, meeting, reading, discussing, clearing and voting, the final decision has been made: the editors of Times Book Review have chosen the 10 best books of 2021. View the winning list here.

The Gucci family speaks out against the star-studded movie “House of Gucci,” saying it glorifies a traumatic event in their lives — the murder of Maurizio Gucci — and misrepresents their family dynamics.

But when does artistic freedom go too far? The film clearly doesn’t lean towards accurate rendering, with the opening disclaimer “inspired by a true story” and the curious choice of having the characters speak English in different versions of fake Italian accents.

In a recent review of the film for Air Mail, designer Tom Ford, who himself was front row seat to the events, wrote: “In real life, none of it was camp. It was absurd at times, but in the end it was tragic.” The film’s lack of nuance left him, he wrote, “deeply saddened.”

Read more about the movie.

That was it for today’s briefing. Thank you for participating. — Natasha

PS “To Live and Die in Alabama,” a new Times documentary series, examines the aftermath of the murder of three police officers during a gunfight.

The latest episode of “The Daily” is about the Omicron variant.

You can reach Natasha and the team at briefing@nytimes.com.