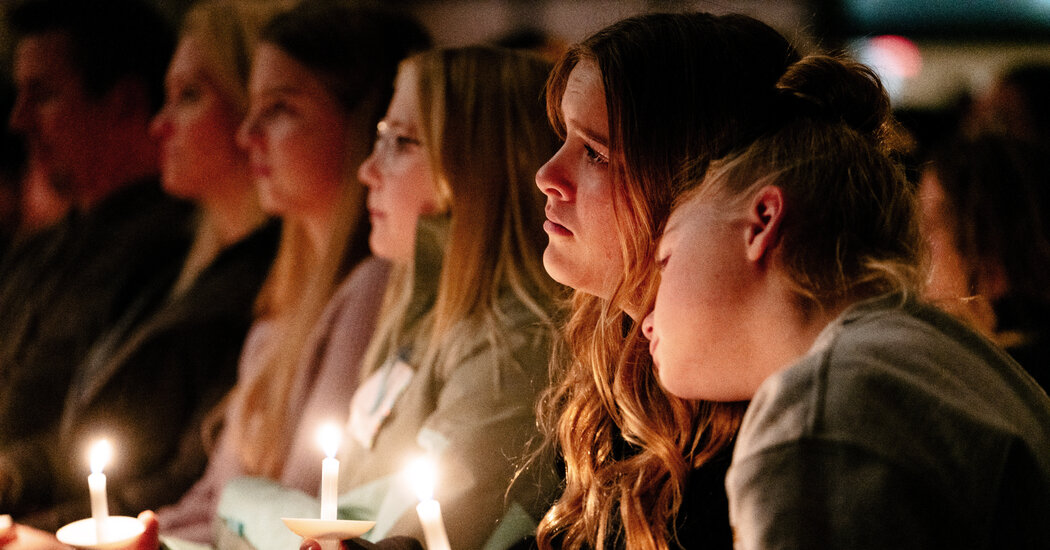 OXFORD CHARTER TOWNSHIP, Michigan — Students from Oxford High School in suburban Detroit rushed for cover and barricaded classroom doors with chairs when they heard the first gunshots Tuesday afternoon. Within five minutes, authorities said, a 15-year-old sophomore at the school had shot 11 people, killing three of his fellow students and leaving others with critical injuries.

Authorities identified the dead as Hana St. Juliana, 14; Madisyn Baldwin, 17; and Tate Myre, 16, who died in a sheriff’s police car while on his way to a hospital. The injured students ranged in age from 14 to 17, officials said, including three in critical condition and another in serious condition. The only adult shot, a 47-year-old teacher, had been released from a hospital.

“I was just sitting there shaking,” said Dale Schmalenberg, 16, who said he was in math class when his teacher heard a gunshot and locked the class. “I didn’t really know how to react.”

The disaster at Oxford High School, north of Detroit in Oakland County, was the deadliest school-site shooting this year, according to Education Week, which tracks such shootings, with 28 reported to be in 2021.

Students described how they frantically hid in classrooms and fled the school after long minutes of terror. Shocked parents rushed to a local supermarket to reunite with their children. Officials across the country issued statements of sadness and frustration as local residents announced a vigil and prepared for funerals.

Authorities received the first of more than a hundred 911 calls about the shooting at 12:51 a.m. Tuesday, Oakland County deputy sheriff Michael McCabe said. Officials said the gunman fired 15 to 20 shots from a semi-automatic pistol before being apprehended.

On Tuesday evening, a suspect — a male student at the school whom officials did not identify — was held in a juvenile detention center while authorities issued a search warrant at his family’s home in the village of Oxford, Michigan.

Undersheriff McCabe said the suspect, who had been in class earlier Tuesday, “gave up without any problems.” When the boy’s parents went to a sheriff’s substation, they refused to allow investigators to interrogate their child.

Authorities said they did not believe the student had planned the shooting with anyone else and they were still investigating whether it was a random or targeted shooting.

In a statement, Governor Gretchen Whitmer described gun violence as a “public health crisis”, adding: “No one should be afraid to go to school, work, a house of worship or even their own home. This is a time for us to come together and help children feel safe at school.”

President Biden said at an event in Minnesota, “My heart goes out to the families who have to endure the unimaginable grief of losing a loved one,” adding, “That entire community must be in a state of shock right now.”

The shooting sparked outpourings of sympathy from Michigan politicians. State Attorney General Dana Nessel said her office had contacted local authorities and offered to assist with the investigation.

“We must take action to properly address gun violence in our schools and the ongoing threat of another unscrupulous tragedy if we continue to offer only thoughts and prayers,” said Ms. Nessel. “Our children deserve better.”

Elissa Slotkin, who represents Oxford Charter Township in Congress, said she is traveling back to the state.

“We must continue to pray and hope for the additional students and faculty who have been injured, and for the students who are now in shock,” Ms Slotkin said. said on Twitter. “They’re going to have to somehow understand that one of their peers is doing this to them.”

Undersheriff McCabe said the school was covered with security cameras and had repeatedly worked with law enforcement to conduct active target practice. A sheriff’s deputy and security guards were assigned to the building, and students described frequent lockdown drills. The undersheriff said one of the officers who helped take the suspect into custody was ordered to patrol the high school full-time.

“The school made sure we knew where to go, who to call, and how to act,” said Eva Grondin, a 15-year-old sophomore who took active shooting practice several weeks ago and moved from a hallway to a parking lot. Tuesday when she heard gunshots. “If we hadn’t had this training, I don’t know what would have happened.”

The undersheriff said the “school has done everything right”.

“Everyone stayed in place,” he said. “They barricaded themselves.”

Students described moments of chaos, the sound of gunshots and people running and screaming. One student said his brother texted him saying he needed help and that a gunman was nearby. But the students also described scenes in classrooms where teachers and students quickly followed protocols.

Brendan Becker (17) said the teacher in his class reacted quickly to the sound of gunshots and locked the door with the students inside. “We just bombed the door with a bunch of chairs, desks, everything we could find,” he said.

Alysse Avey, a freshman, said she’d taken biology class and laughed with friends when the shots rang out. “I went from laughing to crying in about a second,” she said. She said she was sitting in a corner of the classroom with one of her best friends, who was shaking.

“It was really traumatic,” she said, remembering the sound of gunshots making a sound akin to banging on the lockers. “No one was talking, we weren’t yelling or anything, we were just quiet,” she said.

In recent weeks, a severed deer head was found on the school grounds, after which school officials released a statement to calm “countless rumors circulating through our building.” Undersheriff McCabe said the deer incident had nothing to do with the shooting.

Sheriff Bouchard said he was aware of reports of rumors circulating at Oxford High in the days before the shooting, but said none of those reports had reached his department.

The violence in Michigan comes after a reduction in school shootings earlier in the coronavirus pandemic, when some schools kept distanced lessons. But mass school shootings have been a recurring tragedy in recent years. In 2018, a gunman killed 17 people and injured 17 others at Marjory Stoneman Douglas High School in Parkland, Florida. Later that year, a gunman killed 10 people at Santa Fe High School in Texas.

“This is a uniquely American problem that we need to address,” Ms Whitmer said Tuesday.

Located in Oxford Charter Township, a small community in northern Oakland County, Oxford High School is the only high school in the Oxford Community Schools neighborhood, saying it offers families “a small-town feel in the Detroit metro area.”

Fewer than 6,000 students in five townships and two villages in southeastern Lower Michigan are enrolled in the district. The school offers a program where students can earn college credits and earn an associate degree by graduating.

Aiden Page, a senior who had been at school when the shooting happened, recalled how his statistics teacher locked the door immediately after the shots rang out. He said the rest of the class helped set up a quick barricade and cover the windows before hiding in the room. Some students, he recalled, armed themselves with scissors while the teacher quietly walked around checking them.