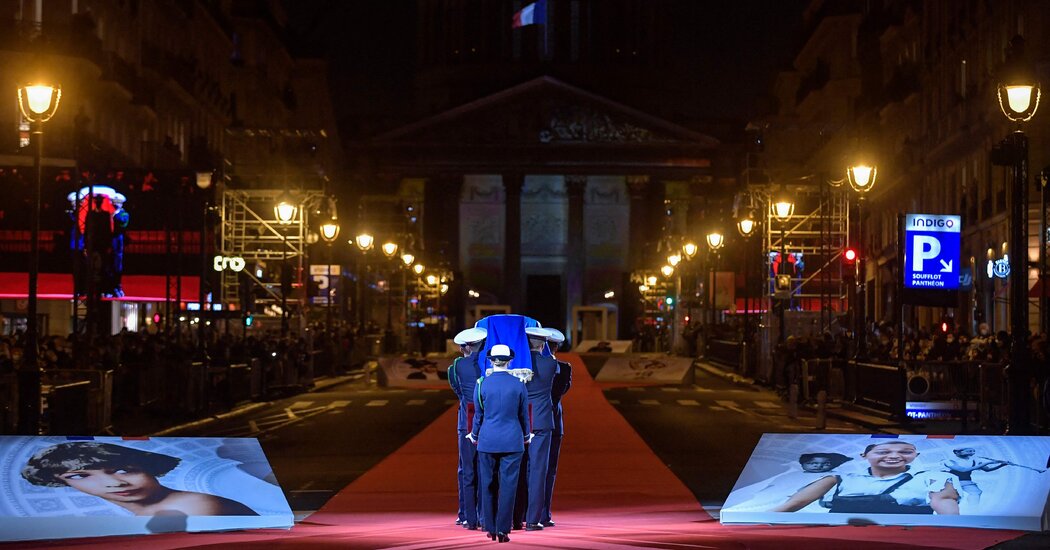 PARIS — Missouri native and beloved in France, whose life spanned French music-hall stardom and American civil rights activism, Josephine Baker became the first black woman to be buried in the Panthéon, the holy tomb of the country’s heroes.

On a gray afternoon, 46 years after her death in Paris, Republican Guard soldiers carried a flag-draped coffin up the red-carpet steps of the Panthéon, where Mrs. Baker joined 75 men and five women, including the author Émile Zola, the scientist Marie Curie and the resistance hero Jean Moulin.

The colonnade of the Panthéon, with its engraved dedication to the “great men” of France, was illuminated with a remarkable collage of images ranging from Mrs Baker’s wild nights at the Folies Bergères in 1926 to her performance in front of the Lincoln Memorial next to the rev. dr. Martin Luther King Jr. on August 28, 1963, as he spoke the words, “I have a dream.”

Mrs. Baker’s reburial under the dome that towers over Paris marked the culmination of an extraordinary journey that began in the misery and racial segregation of St. Louis; led her to fame as the provocative dancer of “les années folles,” or crazy years, of 1920s Paris; and took her to a passionate political commitment to the cause of Europe’s freedom from the threat of fascism and American racial equality.

At a time of tension in France over issues of race and gender, and of friction with the United States, President Emmanuel Macron chose to honor Ms. Baker as a woman of “every kind of courage and daring” and “an American who found refuge in Paris and conquered what it is to be French.”

Five months after a divisive presidential election, he portrayed Ms. Baker as a symbol of unity – what he called “the beauty of collective destiny.” He held her up as an example of the success of immigrants, and of the multitudes that a single life can contain.

“France is Josephine,” declared Mr Macron, standing in front of the coffin. From the right to the left of the political spectrum, at least for a day, everyone seemed to agree.

The longing cadences of “J’ai Deux Amours” or “I Have Two Loves,” arguably Mrs. Baker’s most famous song, filled the mausoleum with frescoes during the ceremony. The admission that Ms. Baker’s heart immediately went out to ‘Paris et mon pays’ – ‘Paris and my country’ – seemed to capture her unusual odyssey.

At the time the song was recorded in 1930, Mrs. Baker was still an American citizen. She became French in 1937, 12 years after her arrival in France. She is the first person of American descent to be buried in the Panthéon, an award marked by Monday’s lighting of the Empire State Building in the red, white and blue of the French flag.

“She had a double affection for the two countries,” Mrs. Baker’s daughter, Marianne Bouillon-Baker, said at a US reception on the eve of the funeral.

After the racial violence she witnessed as a black American child and the repeated humiliations of segregation and discrimination, Ms Baker, born Freda Josephine McDonald, said she had found a freedom and dignity in France for which she was “eternally grateful.”

Other black American artists, including James Baldwin and Richard Wright, had similar experiences, with the result that France is particularly sensitive to American criticism that its overtly color-blind social model masks widespread discrimination.

Mr Macron said Ms Baker’s life has involved “a universal struggle”. Her goal was not “to define herself as black before defining herself as American or French.” Her guiding idea was not the “irreducibility of the black cause”, but to be “a completely free and dignified citizen”, he added.

His words seemed to reflect his administration’s rejection of what it often portrays as divisive American identity politics that threaten to undermine French universalism. Mr. Macron’s characterization of Ms. Baker’s beliefs was consistent with his administration’s fierce defense of universalism. Still, her presence at the Mall with Dr. King and her repeated outrage at the treatment of blacks in the United States made it clear that the specific black struggle for equality was very important to her.

Mrs. Baker became an object of wild Parisian fascination when, just 20, she appeared at the Folies Bergères Theater in 1926, wearing little more than a skirt made of 16 rubber bananas during a show called “The Negro Review”.

The cabaret played out white male colonial obsessions with black women and their bodies in a France then fascinated by black and African art. By clowning and exaggerating, twirling and waving her arms, Ms Baker managed to use and subvert the stereotypes, ridiculing them through what Mr Macron called her use of the ‘burlesque’.

Her fame spread far and wide; writers from Jean Cocteau to Ernest Hemingway fell under her grasp. But when the artistic folly of the 1920s gave way to the fascist military folly of the 1930s, Mrs. Baker showed that she didn’t take her success or the gifts of her adoptive country for granted. She joined the resistance.

It was in her Free French uniform, adorned with her various French military and civilian decorations, that she, along with Dr. King appeared during the March in Washington. “I’ve walked into the palaces of kings and queens and the homes of presidents,” she said. “But I couldn’t walk into a hotel in America and get a cup of coffee, and it drove me crazy.”

She urged the crowd to keep fighting. “You can’t go wrong,” she said. “The world is behind you.”

Gabriel Attal, the government spokesman, told Europe 1 radio that Ms Baker was a “beautiful symbol that embodies the love for France that can also come from people who were not born here.”

His statement seemed to point to immigration, an explosive topic in France – the main theme of the election, along with purchasing power at a time of economic hardship. If Mrs. Baker embraced France, many immigrants, especially from North Africa, have found it much more difficult because of the prejudice they have encountered.

Her reburial came on the same day that Éric Zemmour, a far-right polemicist and TV star with fierce anti-immigrant views, ran for president. Polls show he has significant support.

About Ms Baker, Mr Macron said: “She didn’t defend a particular skin color. She had a certain image of humanity and fought for everyone’s freedom. Her cause was universalism, the unity of humanity, the equality of all before the identity of each person.”